This article is part of a series of explainer pieces by the Voice on some of the most important topics on campus. Other articles in the series can be found here.

Georgetown University Police Department (GUPD) is an on-campus police department tasked with providing security to the university’s main and medical campuses as well as offering safe transportation for students in the Burleith, Foxhall, and Georgetown neighborhoods. The police force has jurisdiction over Georgetown’s campus and is the main source of campus security in incidents of theft, violence, sexual assault, or other violations of the Code of Student Conduct. GUPD is currently overseen by Chief of Police Jay Gruber, who also acts as the university’s associate vice president for public safety.

In addition to conducting patrols, GUPD provides event security for the university’s professional events such as on-campus speakers in Gaston Hall, holds onto lost items, provides students SafeRide transport across campus, and responds to reports of sexual assault. GUPD’s jurisdiction for making arrests is limited to Georgetown campuses and properties.

University police forces are common on college campuses around the nation. The first university department with jurisdiction to arrest was formed in 1894 at Yale University. GUPD was founded not long after. Police presence on campus became more normalized during the Vietnam protests of the 1960s and ’70s. In 2011, a Justice Department survey found that 75 percent of four-year universities had an armed officer force. GUPD officers, however, are not armed, and all firearms are prohibited on Georgetown’s campus, according to the Code of Student Conduct and Human Resources Policy Manual.

GUPD officers are special police officers commissioned by the D.C. mayor under section § 5–129.02 of the Code of the District of Columbia. Under this section, the mayor can allow the existence of a special police force following the application of a corporation, such as Georgetown University, as long as the officers are paid by the corporation they serve. GUPD officers are paid by the university, and overtime pay for providing security at on-campus events is covered by the Student Activities Fee. Although GUPD is overseen by the Metropolitan Police Department (MPD), it is the primary entity responsible for on-campus security.

While GUPD is largely in charge of its own force, it does have a close connection with the D.C. police force. The university’s campus plan filed with the city of Washington, D.C. requires the university accept the presence of a late-night reimbursable detail from the MPD, according to a university spokesperson. Through the Reimbursable Detail Subsidy Program, the university must employ MPD officers to patrol off-campus neighborhoods and respond to noise violations. All MPD officers within the Reimbursable Detail Subsidy Program are required to complete training with university officials prior to beginning patrols. GUPD also works with MPD officers in the event of criminal investigations of students or community members.

MPD officers that work with Georgetown cannot conduct on-campus patrols or enter university buildings. According to the GUPD website, their shift supervisors, sergeants, property officers, detectives, Community Action Team officers, and communications officers all liaison with MPD as a part of their job descriptions.

GUPD conducts the university’s SafeRide programs, which offer students secure transport across campus or within surrounding neighborhoods at night. The service is extended to any Georgetown student, faculty, or staff member from 8 p.m. to 2 a.m. on Sundays through Wednesdays and until 3 a.m. Thursday through Saturday.

GUPD’s SafeRide program has been criticized in the past for its long waits and inefficiencies. Due to limited staffing and number of vehicles, students often report long wait times for a pick-up. These students argue waiting outside at night can be dangerous, especially as students often utilize the service because they feel uncomfortable in a situation and are in need of a secure escort. In the spring of 2020, the Black Survivors Coalition (BSC) demanded GUPD reduce wait times for SafeRide services, increase the number of available vehicles, and institute a more rigorous vetting process for drivers. Following the BSC’s sit-in, a fourth van was added to the SafeRide program to operate on Mondays, Wednesdays, and Fridays.

Following negotiations with the BSC, the university committed to increasing training for SafeRide drivers through the Sexual Assault Peer Educators (SAPE) program. Administrators also promised to review wait times to ensure 10 to 15 minute maximum waits by the beginning of the fall 2020 semester, though with fewer students on campus, current wait times are unclear. Additionally, if SafeRide drivers are GUPD officers, they will not be in uniform during their driving shift to make students more comfortable seeking the service, following another BSC demand. Vice President Erik Smulson committed to ensuring any SafeRide driver in violation of Title IX code would be refused continued employment.

In addition to the SafeRide program, GUPD officers are required to undergo special training for responding to reports of sexual assault. GUPD has a Sexual Assault Response Team (SART) specifically intended to respond to these incidents. According to a university spokesperson, SART team members work with campus partners and can explain university and criminal processes to survivors considering legal actions against assaulters.

Student calls for a reformed GUPD

On May 5, 2018, the student organization Georgetown United Against Police Aggression (GUAPA) dropped a letter at President John DeGioia’s office calling for GUPD to officers to remain unarmed, after a second organization, GU Advocates for Responsible Defense (GUARD), delivered a letter to DeGioia requesting that officers be equipped with firearms. GUAPA’s petition was backed by 31 other student organizations, including Black House, the Black Student Alliance, GU Pride, and Casa Latina. GUARD’s letter cited the threat of mass shootings as a reason for arming on-campus officers.

GUAPA’s petition raised concerns that armed officers would create an increasingly hostile environment for Georgetown students on campus, particularly students of color. GUAPA’s letter also expressed worries that more cases of officer-student violence might occur if officers equipped with firearms responded to incidents of mental health crises. As of the publishing of this article, GUPD remains unarmed.

Criticism over proposals to equip GUPD with firearms came amidst reports of unnecessary police use of force on Georgetown’s campus, in which officers reportedly accosted and physically restrained Our Daily Planet journalist Kurt Bardella entering an event in Gaston Hall.

Additional concerns that GUPD overpolices students of color on campus arose during the BSC’s sit-in at DeGioia’s office in the spring of 2020, where students questioned Gruber about officers disproportionately stopping Black students on campus and in surrounding neighborhoods. Student protesters at the time also called for third-party oversight of GUPD to ensure transparency and claimed the current online system for reporting officer bias incidents was ineffective. Students either found online complaint forms did not work or never received a response following their report.

During discussions with the BSC, Smulson suggested a potential third-party hotline that would ensure transparency for complaints against GUPD officers. At the time of publication, such a hotline is not yet in place. Smulson did commit to releasing a list of GUPD officers with their training status, another request from BSC.

According to the university, GUPD worked with undergraduate program assistants throughout the summer to improve diversity and implicit bias training for GUPD officers. These conversations with students to improve training are planned to continue through the calendar year. Following calls for GUPD to improve its training, officers are working with the Georgetown University Law Center’s Innovative Policing Program to develop new training for officers.

During the Black Lives Matter protests during the summer of 2020, students crafted a petition for the university to cut all ties with MPD following the killing of George Floyd and other Black Americans, as well as aggressive actions by MPD against D.C. protesters. The petition called for Georgetown to follow in the steps of the University of Minnesota, which cut ties with the Minneapolis Police Department and ended its contract with officers for university events.

Although the university police force is currently legally required to have a contract with MPD, GUSA senators passed legislation demanding the reduction of university connections with police departments. The legislation also calls for the specific details of Georgetown’s contract with MPD. Vice President for Institutional Diversity and Equity Rosemary Kilkenny, GUPD Chief Jay Gruber, and Vice President for Student Affairs Todd Olson released a statement on June 5 regarding the university’s relationship with GUPD that promised increased implicit bias training for all officers. The remaining details of the contract, however, remain classified. At this time, MPD retains its contract with the university. 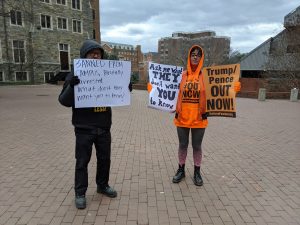