The GUSA Senate passed three pieces of legislation advocating a shift in policy in Georgetown’s relationship with the Metropolitan Police Department (MPD) and GUPD at its meeting on June 7.

The first piece of legislation calls for Georgetown to reduce its contract with MPD. The resolution states that the police response to nationwide protests responding to the murder of George Floyd and countless other Black individuals by the police and calling for an end to police brutality has been excessively violent. It also references a petition with over 6,000 signatures calling for Georgetown to end its contract with MPD.

In addition to demanding that the university reduce its contracts with MPD, it requests that Georgetown’s administration publicize the details of its relationship with MPD.

On June 5, Vice President for Institutional Diversity and Equity Rosemary Kilkenny, as well as GUPD Chief Jay Gruber and Vice President for Student Affairs Todd A. Olsen, released a statement further explaining Georgetown’s relationship with MPD, though many parts of the contract remain classified.

The email states that contracting MPD officers is part of Georgetown’s campus plan with the city of Washington, D.C. and that all MPD officers who interact with students are required to undergo training by the university. It also promises that the officer training will be updated to include elements related to implicit bias and conflict de-escalation.

Sen. Leo Teixeira (COL ‘21), who introduced the resolution, pointed out that MPD fails to protect many students on campus. “We need to be cognizant of the fact that there are likely individuals in every single one of our constituencies to whom having MPD on campus patrolling our university and our space is a danger and it makes them feel unsafe,” he said. Though MPD does not patrol campus regularly, according to Kilkenny’s email, they have a late-night detail and are present for special events and emergencies.

However, Sen. Julio Salmeron-Perla (SFS ’22) disagreed and argued that many groups would feel unsafe without MPD on campus. “This [resolution] poses a disservice to communities such as sexual assault survivors but also hate crimes. It is my understanding that MPD conducts investigations into hate crimes, and as a person of color, it is really important for my community to feel safe,” he said.

Abdul Gabriel (COL ’22) responded by arguing that MPD’s presence on campus does not help Black students. “Let’s not forget that this resolution is specifically for Black students here at Georgetown,” he said. “I cannot use sugar-coated emails as a reference to suggest that the university is doing a better job at trying to make its Black community feel safe. We need simple and real action to make Black folks on this campus feel safer. There are 6000 voices that have spoken up, and I’m quite certain there are way more.”

The resolution passed with 14 votes in favor, five votes in opposition, and one abstention.

The second piece of legislation was a bill to establish an eight-member student advisory committee to oversee GUPD. The bill cites allegations of racial profiling and other discriminatory practices from GUPD officers as well as an underdeveloped system for reporting incidents of police misconduct on campus.

The committee would oversee GUPD activities by maintaining an anonymous reporting form for individuals to file complaints against GUPD, publishing semesterly reports that summarize major complaints and concerns related to GUPD conduct, and recommending policy changes to Georgetown administration.

Teixeira introduced the bill, emphasizing the importance of student engagement with GUPD. “There’s not enough transparency over GUPD. We know that there are many instances of GUPD having racial bias on campus,” he said. “This won’t necessarily have power over GUPD, but it’s something that we as students can do to inform other students”

Sen. Henry Dai (SFS ’22) spoke in opposition, arguing that more communication with police officers is important before taking action. “We should be respectful and not be so quick to judge individuals. There have been individuals who have been out of line, which is why a committee, in theory, is important, but I’d like to see more communication before taking broad action,” he said.

The bill passed with 17 votes in favor, two votes in opposition, and one abstention.

The final piece of legislation on GUPD obligates the GUSA Senate to email all known GUSA alumni asking them to reach out to university administration demanding they clarify the relationship between Georgetown and the MPD. It references widespread support for the MPD contract petition and argues that GUSA should use its alumni network to advocate for the issues it raises.

The bill reports that thousands of students have used an email template to ask Georgetown’s administration to end or reduce its contract with MPD. The emails that GUSA would send to alumni would recommend that they use this template to reach out to administration.

The bill passed non-unanimously by a voice vote. No senators spoke in opposition to the bill.

The Senate also passed a resolution to support LGBTQ students. Every June, the LGBTQ community in the U.S. celebrates Pride Month, which commemorates the June 1969 Stonewall Riots that were instrumental in the development of the modern LGBTQ rights movement. The resolution states GUSA’s support of LGBTQ students at Georgetown during this month and beyond.

While the resolution generally affirms GUSA’s support of the LGBTQ community, especially LGBTQ people of color, it also supports the creation of gender-neutral bathrooms and expanded housing options for trans and gender-nonconforming students on campus, citing insufficient accessibility of both.

Finally, the Senate passed a bill to amend the GUSA bylaws regarding the powers of the treasurer and the rules governing GUSA’s various financial accounts. A bill passed by the Senate on April 19 gave the chair of the Finance and Appropriations Committee the ability to act as the GUSA treasurer, and the new bill amends the bylaws to account for this new role. Additionally, the new bill clarifies the balance of funds between the Senate and the Executive.

The next Senate meeting will be held on June 14 at 5 p.m. EST over Zoom.

This post has been updated to reflect the relationship between Georgetown and MPD. 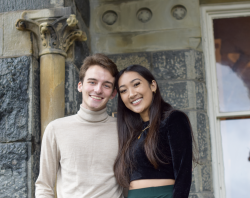