The GUSA Senate passed a resolution to support the Black Lives Matter protests and the Black students on Georgetown’s campus at an emergency meeting called by Speaker Daniella Sanchez (COL ’22) on June 1.

The resolution brings attention to the protests currently taking place in major cities across the U.S. and around the world in response to the death of George Floyd, an unarmed Black man who was killed by a Minneapolis police officer while in custody. Floyd’s death, along with the police shooting of Breonna Taylor while she was asleep in her home, has ignited a national conversation about the disproportionate rate at which police kill Black individuals.

The resolution also asserts that the police have responded to the protests with excessive violence, pointing out that several cities have used rubber bullets, tear gas, and military forces to quell protests. “The police response to these protests demonstrates a clear unwillingness to take necessary action and engage with those advocating for racial justice, which shows that there is no longer room for qualifiers or condition support for protestors fighting for the ideals of the Black Lives Matter movements,” the resolution reads.

Nile Blass (COL ’22), a representative from the Black Survivors’ Coalition, argued that supporting the resolution would be an important step for the GUSA Senate to represent Black students on campus. “[This] is probably one of the most meaningful yet easily accessible things that senators can do at this point in time to show Black and brown students that we matter,” Blass said. “This is one of the most fundamental ways that our democratic system on campus can support Black and brown students in a way that is visible and meaningful.”

Jordan Brown (COL ’22), a representative for the Black Leadership Forum, also expressed her support for the resolution, though she argued that GUSA needs to take other actions to support Black students and respond to systemic racism. “I don’t think that support of just this protest is enough. These protests aren’t isolated incidents,” she said. “Don’t just stop with whatever we’re doing here, but the next time Black people are affected, the next time something comes up, please also consider giving your support.”

The resolution was introduced by Sen. Leo Teixeira (COL ’21) and was co-sponsored by Sens. Sofia Negrete-Retamales (COL ’23), Leo Rassieur (COL ’23), Zahra Wakilzada (COL ’23), and Joshua Marin-Mora (SFS ’21) as well as the Black Survivors’ Coalition and the Black Leadership Forum.

The resolution passed unanimously with no abstentions. None of the senators spoke in opposition to the bill. 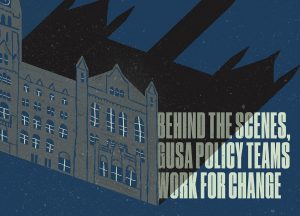 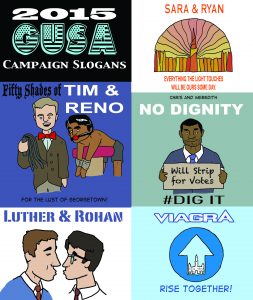