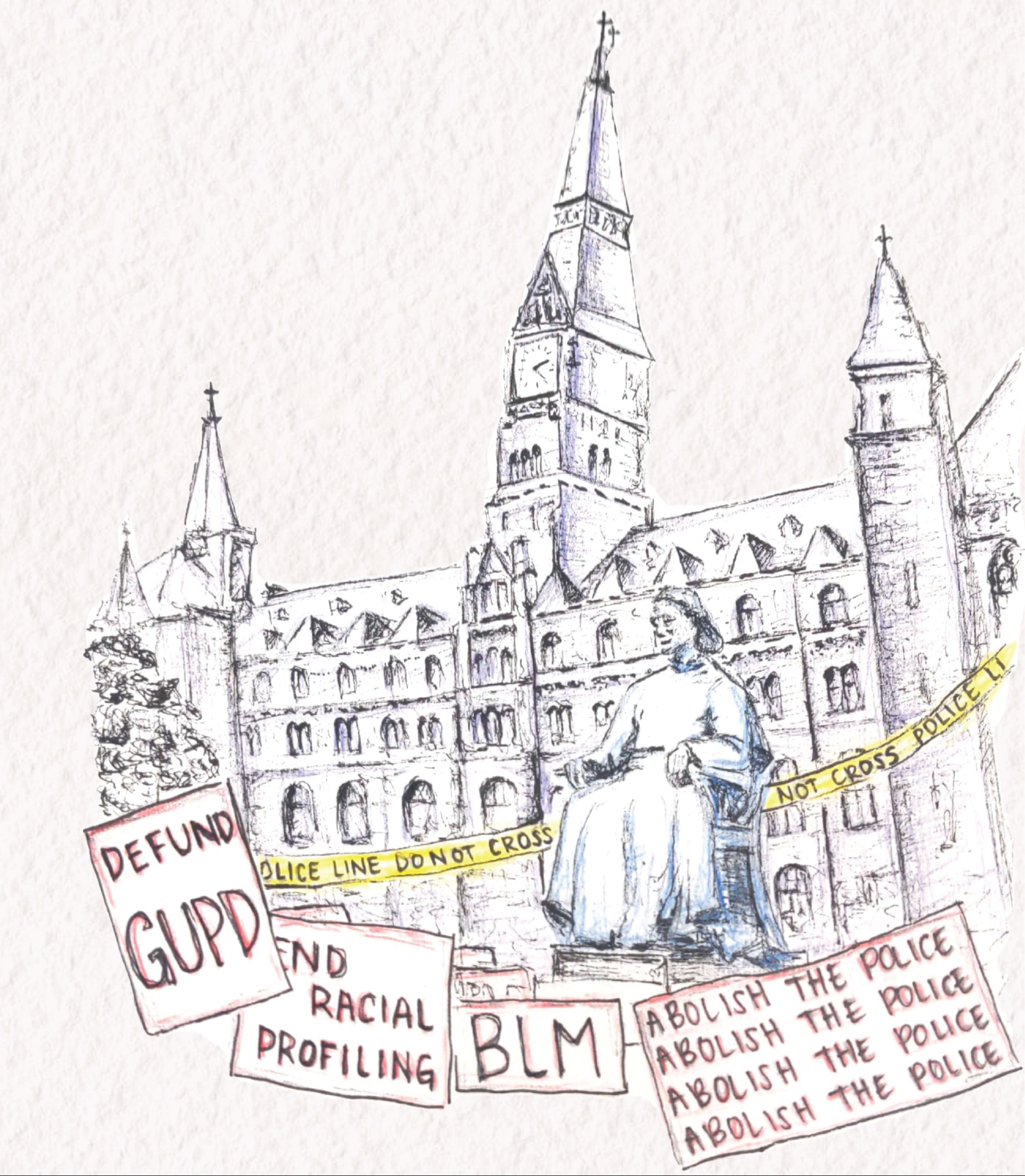 The Georgetown University Police Department (GUPD) has maintained a dangerous and  imposing role on this campus for far too long.

As an organization, GUPD is not equipped to deal with emergencies beyond flexing muscle. GUPD’s bloated force of 47 patrol officers should be slashed to 10, with the $1.7 million saved yearly used to develop alternative crisis response organizations.

At its core, GUPD actively harms. This is true with regards to their conduct around students of color, predominantly Black students. Throughout its history, GUPD received multiple reports of racially profiling and aggressively policing students of color, calling into question whether it actually increases student safety. The current organization still enshrines racist policing on campus.

GUPD even struggles to complete the most basic tasks associated with “public safety” work. On Sept. 19, a campus intruder tailed students and brandished a knife in New South. GUPD did not apprehend the intruder until the next day in a stunning failure of security.

The New South debacle was an isolated incident—the vast majority of GUPD actions are in response to drugs or alcohol. According to public data, only eight arrests were made on campus from 2017-2019, all related to substances. This policy of policing victimless crimes results in an increased police presence on campus.

GUPD’s own arrest data makes it clear the situations they respond to do not require law enforcement, just care and intervention. In cases with mental health concerns, GUPD are never the most qualified respondents. These services could be provided more effectively by someone trained to handle a crisis. Many students—especially students of color—would feel safer seeing a clinician arrive at their apartment than a uniformed officer, thus encouraging people to actually seek help when they need it.

Equally concerning is the lack of accountability that students have over the organization. GUPD is supervised by the Vice President for Public Affairs, Erik Smulson. This set-up frames policing as a PR issue rather than a community safety initiative, begging a critical question: Is the force’s purpose truly to ensure safety, or the appearance of it?

We are not the first to point out these concerns; generations of student activists, especially Black and femme students, have highlighted these issues. Many of the following proposals are adapted from or inspired by the 2020 Healy Hall sit-in organized by the Black Survivors Coalition (BSC). Given a long history of racial harm, in any GUPD reform, the needs of students of color, especially Black students, must be centered.

The lowest-hanging reform is greater accountability. While students can submit concerns with officers, there are few opportunities for systemic oversight of the force. The Student Safety Advisory Board, designed to respond to worries about security on campus, meets only when administration calls it and suffers from low attendance.

Thus, the force does not receive much-needed oversight, not just in individual instances of

misconduct, but also as an institution that regularly terrorizes students of color and generally inflicts a culture of fear. Though past student review proposals, including a GUSA-initiated oversight board, have failed to come to fruition, some body must be implemented that has the power to handle long-term issues like staffing, training, and internal culture.

Any form of oversight board should have access to the force’s hiring and bias training materials, demands made by BSC two years ago that were never met. Though the police force undergoes bias training and has completed an active bystander training, students have a right to know exactly what is being done to keep them safe. Bias training should not be seen as a fix-all; students have no indication of whether officers are receptive to the training, and anti-racial bias training can never change the fact that the police are, fundamentally, a racist institution.

Meanwhile, students rely on chronically underfunded vital services. Students must make mental health appointments months out to ensure a spot with CAPS. Survivors of trauma, especially Black survivors, have implored the university to provide more clinicians and wider specialization at Health Education Services. GERMS, the student-run emergency service that is able to respond to any substance-related medical concerns GUPD handles, receives comparatively little funding despite providing an essential function. Each of these services can handle 90 percent of what GUPD currently does and can do it in a more trauma-informed, accessible, and identity-aware way.

Though GUPD does not release budget information, their website lists different officers’ salaries, which indicate that our proposed cut to 10 officers would save the university $1.7 million annually from wages alone. This simple fact points to a reality the university has too long ignored: Policing is costing us other chances at community care.

That’s not to say students don’t need emergency services on call 24/7—but there’s no reason for that service to be a uniformed police officer. Georgetown already runs Saferides to help students get home late at night and could continue to expand the program with non-police accompaniment.

To advance community care, Georgetown should follow the BSC’s proposal and implement a 24/7 crisis center and hotline with trained professionals to respond to substance-related or interpersonal conflicts that are non-violent, which the vast majority are. Though in the past the university has cited cost concerns as a reason not to enact the proposal, the money saved through defunding GUPD would make this feasible.

Students have a role in this too. We must stop calling GUPD on fellow students or community members. For nearly any situation, RAs and GERMS are better resources, and if escalation is truly needed, they can help you make that decision. Know that when you call the cops, you could be exposing your fellow students to trauma and violence. Ask yourself if the situation truly demands the risk of that.

If you are a student who feels safe around GUPD, recognize that this is in itself a privilege, and avoid glorifying their work when they make so many of your fellow students feel unsafe. And call for the reforms that you agree with. Just a modicum of accountability required a week long sit-in, so if you are dedicated to reform, keep going.

Look out for each other, not just in the face of daily stress, but in response to systems of oppression and discrimination on our campus. The onus is on us to continue building mutual-aid-style networks and supporting systems that are student-centric and anti-racist.