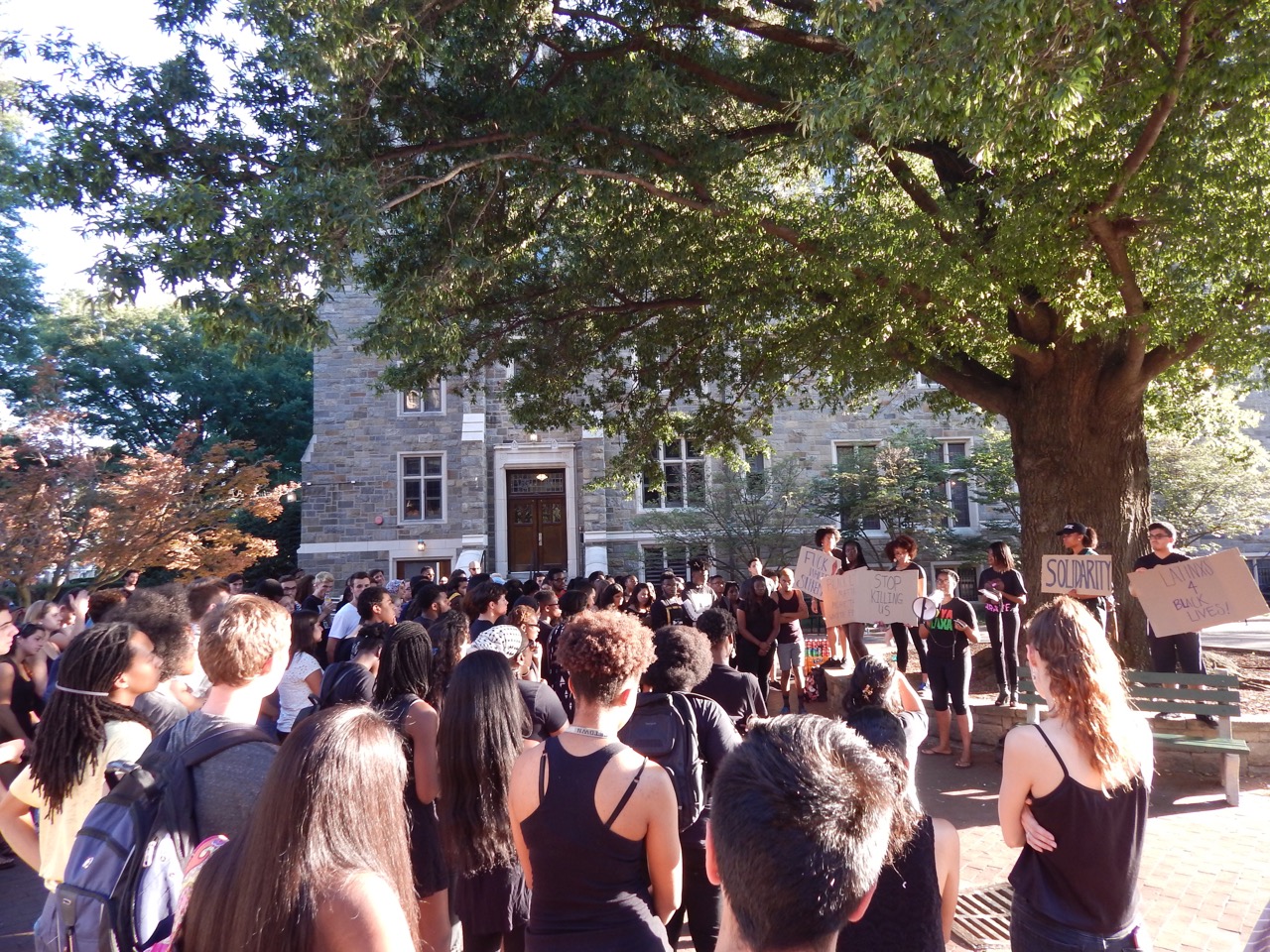 Over 200 students and faculty gathered in Red Square on Friday, Sept. 23 for a vigil and forum on race relations and racial justice in the U.S. While the forum explicitly focused on the recent death of Terence Crutcher in Tulsa, Okla., and the unrest in Charlotte, N.C., discussion covered a wide range of themes. Participants preferred not to speak with the Voice on-record, emphasizing that the vigil was focused on community reflection and catharsis.

The forum began with a chant of “Black Lives Matter,” led by Anthony Anderson (COL ’18), which received enthusiastic support. After a moment of silence, Jonese Austin (SFS ‘19) led a prayer for peace, endurance, and justice in the United States. Discussion then opened for public comment.

Anderson and Austin were surrounded by a variety of signs held by other students. The messages displayed included “Solidarity,” “Black Lives Matter More than White Feelings,” and “Stop Killing Us.” 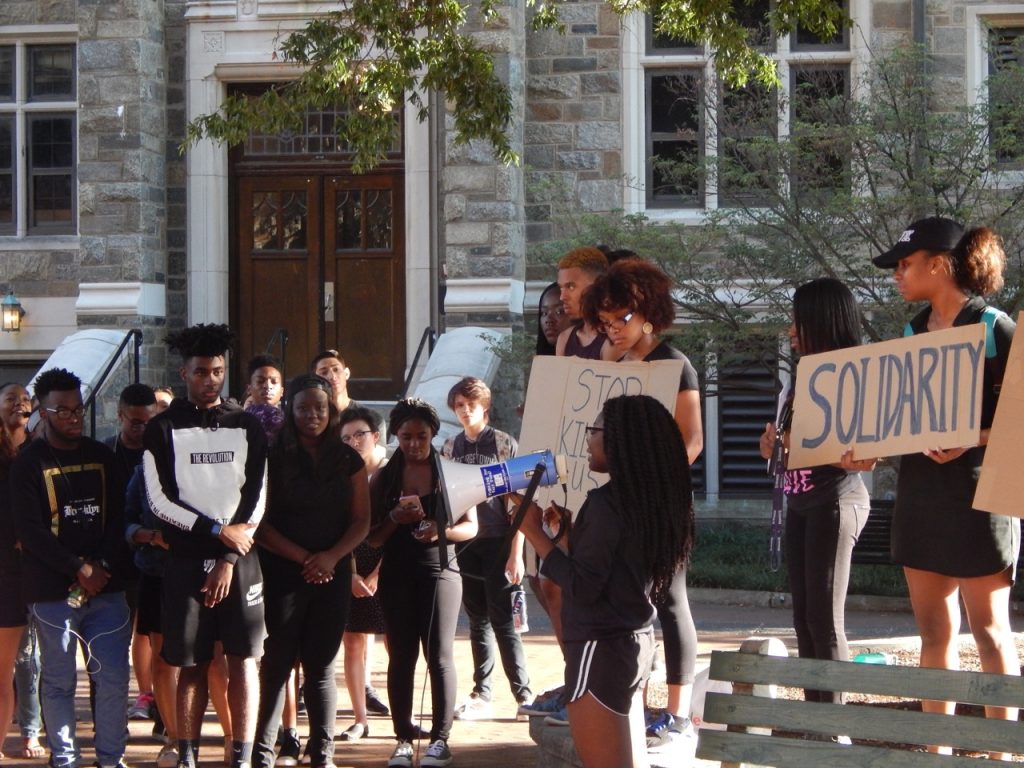 Public discussion and comment lasted for approximately an hour. Some speakers discussed confrontations they had had with law enforcement and stressed a need for reform. Others commented on the deaths of 11 year old Tamir Rice and 13 year old Tyre King, and their own fears for the safety of their younger siblings. The need for the inclusion of black women and LGBTQ members of the African American community in contemporary social movements was also mentioned by multiple speakers.

Some stressed the power of the ballot box, and encouraged those in attendance to vote in November. Other speakers addressed the importance of faith and religion in dealing with adversity and trauma. One speaker quoted Malcolm X, saying, “The future belongs to those who prepare for it today,” and praised the first year students in attendance as the future of Georgetown and the future of African American advocacy at the University.

Combatting apathy inside and outside of the African American community was a theme raised by many speakers. “When you see other black people around Georgetown that choose not to talk about [Black Lives Matter] because they don’t want to come off as radical. . . they’ve internalized some of these attitudes,” said Carrie Mutombo (COL ‘19), referring to the idea that the Black Lives Matter movement only pertains to socioeconomically disadvantaged members of the black community. “We talk about ‘staying woke’ a lot. We’ve sort of made a joke about it, but honestly, you need to wake these black people up because they don’t understand that they belong to a community that is hurting. We’re in a lot of pain,” Mutombo said. 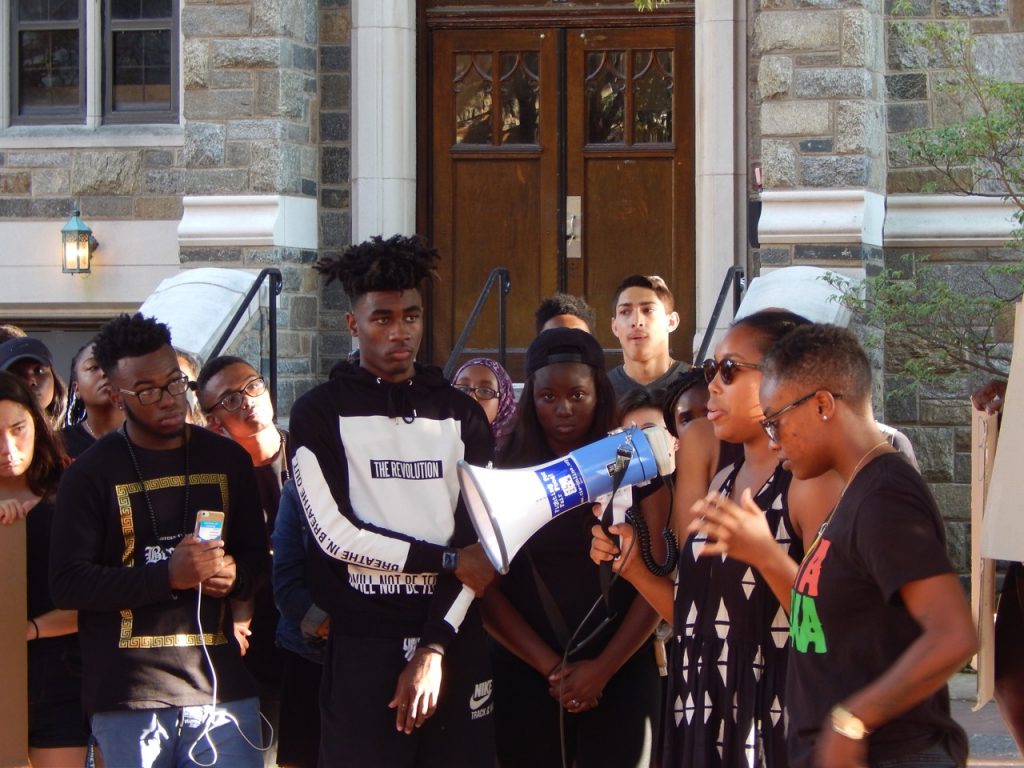 A few speakers emphasized the need for solidarity and unity between different communities of color in the U.S. One sign brought to the event read “Latinxs 4 Black Lives.” A woman in attendance who carried a sign reading “Yellow peril 4 Black Lives” was praised by a few speakers.

Several prominent members of the University were in attendance, but could not be reached for comment. Dr. Todd Olson, vice president for student affairs, was present for most of the event, as was GUSA Vice President Chris Fisk (COL ‘17). Rev. Brandon Harris and Brahmachari Vrajvihari Sharan of Campus Ministry were also in attendance.

The event concluded as all in attendance linked arms and formed a circle encompassing most of Red Square and sang “We Shall Overcome.” 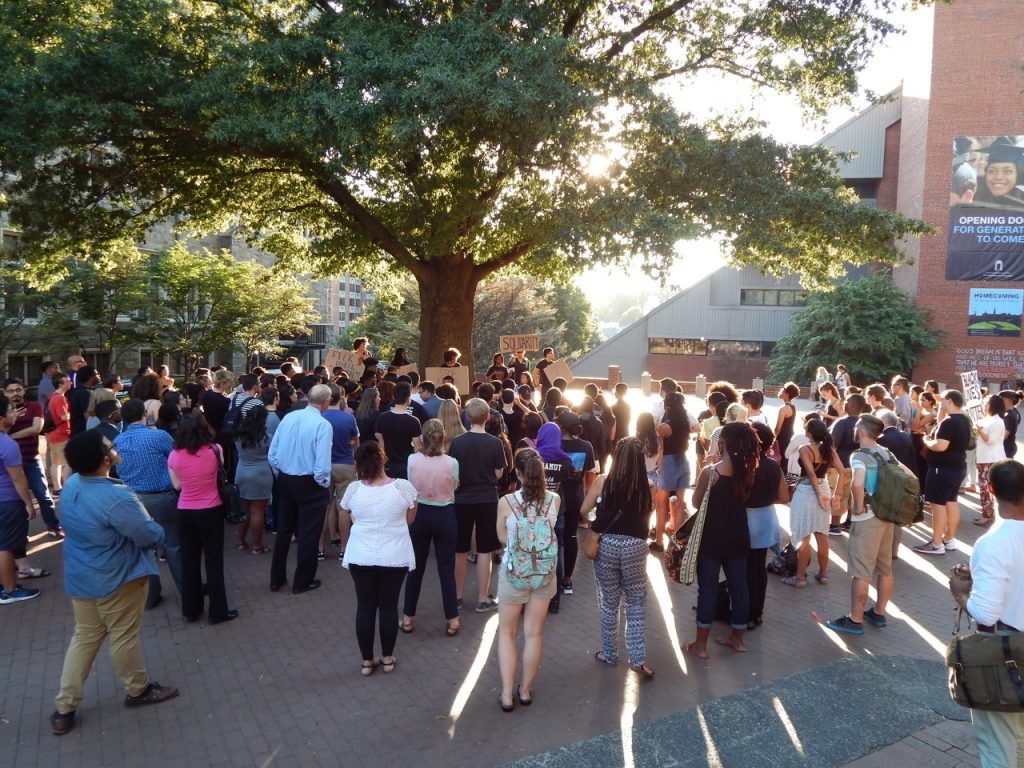 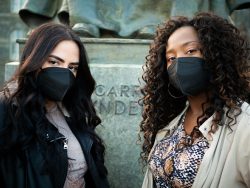