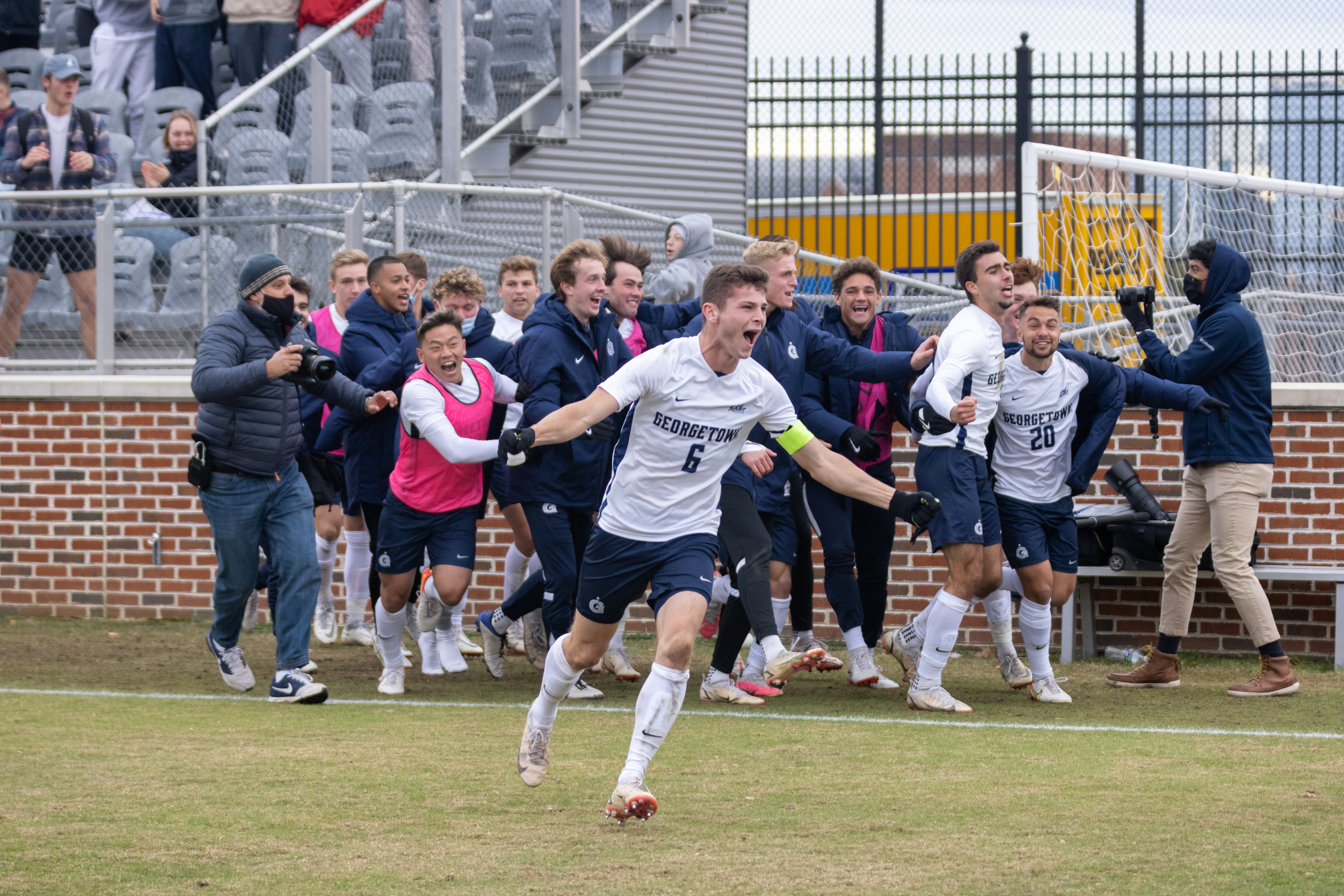 Hoya fans got their first look at the 2022 Georgetown men’s and women’s soccer team on Sunday, as both squads hosted exhibition games at Shaw Field. In their opening exhibition of the spring, the men’s team fell to Wake Forest 1-0 in their first game without Dante Polvara, Sean Zawadzki and Will Sands, among others. Women’s soccer lost 4-2 to Penn State in their lone home exhibition match of the spring, as their retooled backline struggled to stay in front of the Nittany Lions. The rosters on the pitch are far from a finished product as no incoming freshmen or transfers were available.  Read below for some notes and analysis from the two games.

This game marked the return of junior defender Daniel Wu and sophomore midfielder Trevor Burns from injury. Burns missed all of last season due to injuries, while Wu went down in the Big East Tournament with a leg injury. Burns is part of an entirely reshaped starting midfield since Zawadzki, Polvara and Chris Hegardt all went pro. He was joined by freshman Joe Buck and junior Aidan Rocha, who played higher in the formation than he has in recent seasons.

Last season, Wake Forest went 13-7-1 and made it to the third round of the NCAA Tournament before falling to Notre Dame. In windy conditions at Shaw, the two squads got off to a lukewarm start, with neither team getting much going. Burns was an early bright spot, bringing consistency to the midfield. Freshman Kieran Sargeant built off his outstanding freshman year by moving into Sands’s old spot at left back and made several impressive runs that unfortunately didn’t amount to much.

Midway through the first half, freshman Diego Letayf got his first minutes in a Hoya uniform after starting classes and joining the team in January. Letayf, a defensive midfielder, entered the game for de Almeida with Rocha sliding to left back to make room for the FC Dallas product. Letayf actually soon got a good look off a Linhares free kick service, but his header went wide. Before the end of the half, Dillow had several chances at the end of crosses, but could not convert.

Throughout the game, Georgetown failed to display much offensive creativity. This changed slightly with the insertion of Tabora, who brought energy and the ability to make things happen on the offensive end. However, this didn’t lead to much of anything, as the Hoyas could not find open looks.

In goal, graduate keeper Ethan Koehler did not face many shots in his 60 minutes. Koehler, who redshirted his freshman year, is likely to return for his sixth season in 2022 and will have a good shot to be the starting keeper. Wake Forest’s goal came off a broken play on reserve goalkeeper Jordan Wells. There was not much Wells could do on the shot, as the forward was in alone. Sophomore Ryan Schewe also got some minutes at keeper to finish the game out.

Overall, the Hoyas struggled in their first game after the loss of most upperclassmen. The defense looks like it will remain a plus, as Wu, Kenny Nielsen, Sergeant, and Rocha are a very skilled core. The question will be where the scoring will come from. Freshman Blaine Mabie received an extended look from head coach Brian Wiese and showed flashes, but was unable to put much together. Tabora seems to be the most likely player to take a step up big time next season, but he will need help either from players like Linhares and Mabie, or from an incoming freshman like Jacob Murrell or Zach Zengue.

The Hoyas’ next game will be next Saturday, March 26 at Virginia Tech. There will likely be no stats or livestream of the game. The only other home match for the Hoyas will be their final spring game on April 23 vs. Rutgers. The game will be at Shaw Field at noon. 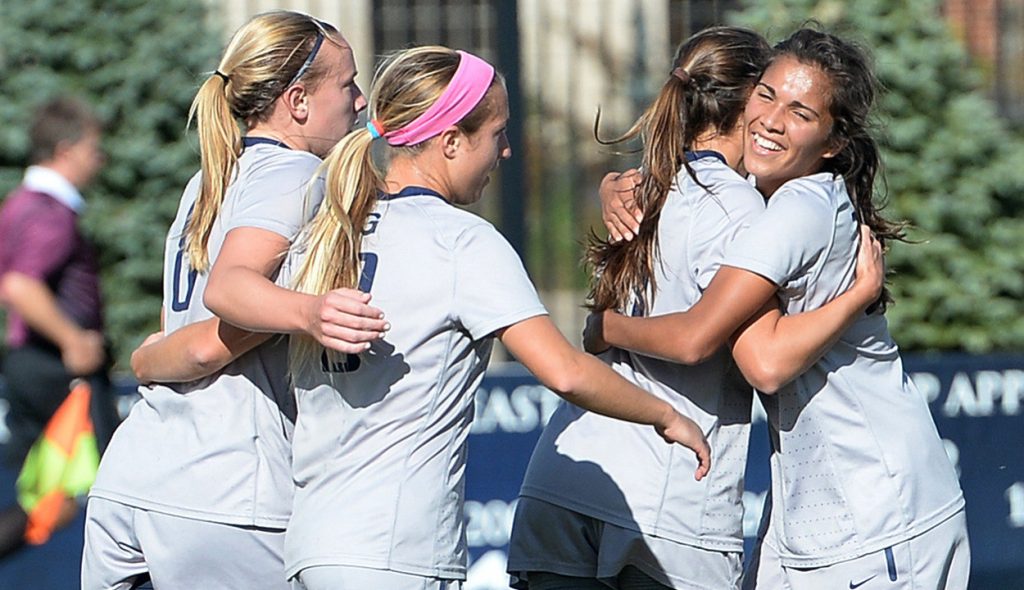 Similarly to the men’s side, this team is dealing with a rash of defections from last season’s squad. However, the women’s losses have largely been on the defensive end, with Kelly Livingstone, Sydney Cummings, and Kaitlyn Parcell going pro, and Jenna Royson graduating. Only freshman Eliza Turner remains, with Boo Jackson joining her when she returns from injury.

The defensive losses led to some experimentation with junior Paige Leonard and sophomores Alex Bair and Erin Junkmann joining Turner to start the game. Of course, reigning Big East Midfielder of the Year, Julia Leas, also contributes on the defensive end. Logistically, this game took place over three 30 minute periods.

Junior Allie Augur, one of the top goalkeepers in the Big East, was under fire early, making a key save, but then fouling a Penn State player who was coming unimpeded into the box. This led to a PK just out of Augur’s reach for a 1-0 Nittany Lion lead. Generally, it seemed like the Hoyas were leaving a lot of space in the middle of their formation that Penn State exploited throughout the match.

A few standouts from the initial frame included Bair, getting her first extended run as right back, and freshman forward Erika Harwood who displayed her speed down the flank on several occasions. Unfortunately, the Hoyas could not generate many chances at all, while Penn State got another great look after Leonard overplayed a ball down the side. Augur stepped up to mke the save.

The second period brought out several familiar faces for the Hoyas. Junior forward Gia Vicari and freshman forward Cyanne Doyle took their usual places at the top of the formation, while outgoing seniors Devon Lis and Royson filled in in the midfield and defense. Between players leaving and inactives, Royson and Lis were likely needed for numbers to give starters a rest.

It only took Vicari four minutes to get a good look at goal and earn a corner for the Hoyas. While Vicari and Doyle brought some energy to the forward group, it did not lead to goals, as the game turned into a midfield battle. That is, until another foul in the box led to a second penalty kick conversion for Penn State. The Nittany Lions would tack on one more before the end of period, as Turner got beat and Junkmann failed to win a ball, leading to another one-on-one with Augur.

In the third period, the Hoyas finally found a spark. A goal from Doyle was waved off due to an offsides call but Georgetown came right back, as a Fernandez-Powell corner was nodded in by Leas. There remains hope that Fernandez-Powell will return to take her fifth year in the blue and gray, a boon for a team that relies on her excellent set piece play for much of their offense. Georgetown continued to dominate possession without generating many good looks.  Unfortunately, the Hoyas gave the goal right back as reserve sophomore goalie Joella Chase badly misjudged a hard-charging forward and mistimed her run. The Nittany Lion slipped past her and slotted another goal home.

The final goal of the game came from a remarkable individual run by Turner, as she fought through multiple defenders and fired a rocket past the keeper. This ended a disappointing game on a high note for the Hoyas, Turner in particular. The freshman phenom was dispossessed at several inopportune times through the game, and seemed overmatched anchoring the backline without her veteran teammates.

This underscores the need for head coach David Nolan to find the next Sydney Cummings in the transfer portal, as the current backline, even accounting for the potential return of Jackson, looks like it might struggle. Obviously, it will be nearly impossible to find a player with the same kind of impact Cummings had as a graduate transfer, but a veteran counterpart in the center defense looks to be necessary. Offensively, sophomore Tatum Lenain was impressive as an attacking midfielder. She made things happen often, and those chances will turn into goals soon enough.

This was already the third exhibition matchup for the Hoyas on the season. Their next fixture will be on Saturday, Feb. 26 at VCU. Their season will end on the road at James Madison on April 8. There will likely be no stats or livestream of these games. 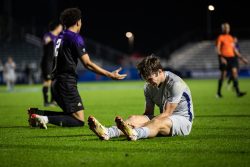 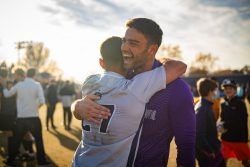