Inside the mind of the art world’s most enigmatic rat 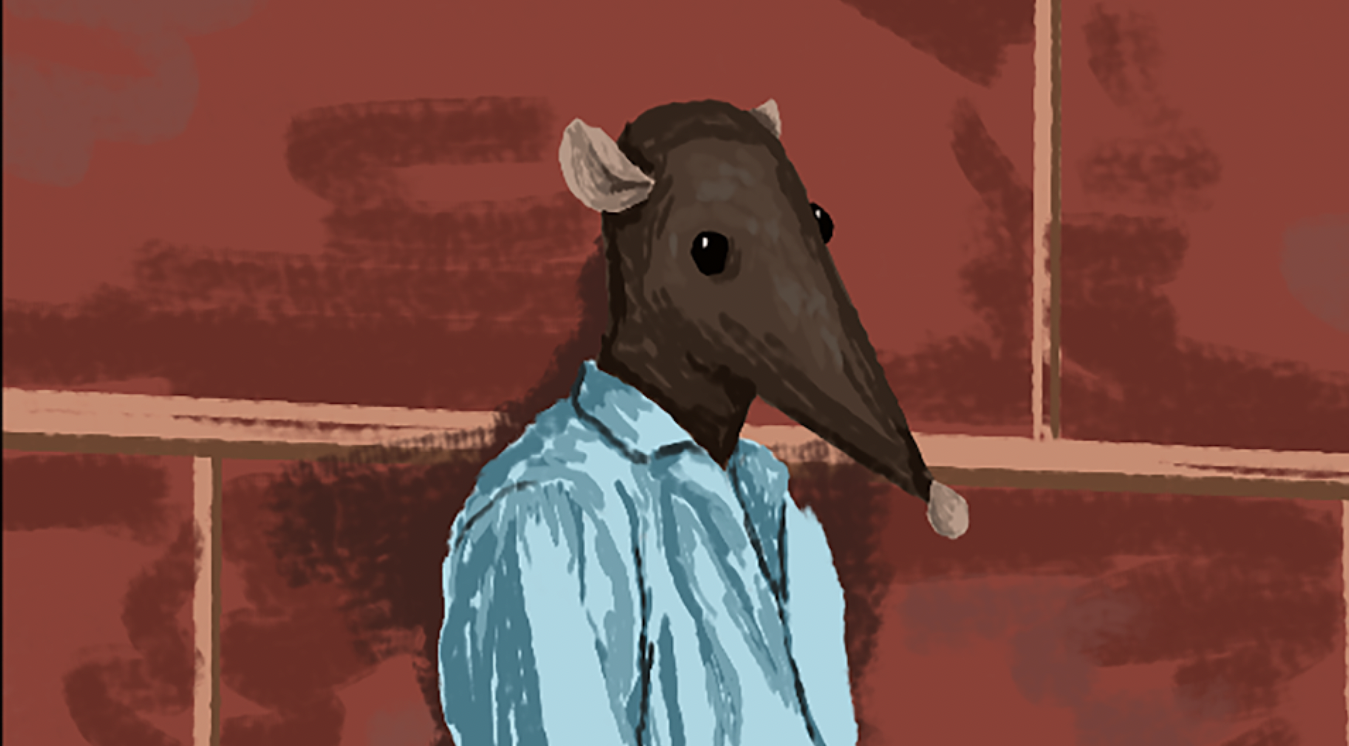 When I meet him for the first time, he is standing in the corner of Henle’s most distant courtyard, chewing on a scrap of chocolate left on a discarded candy wrapper. Sure, we’ve interacted before in passing, but formally meeting him is a different experience. He gestures around, showing off his surroundings—scuffed concrete, scattered mulch, and two stiff plastic deck chairs. From the casual design of his abode, his artistic mind is impossible to miss.

He is wary of me, at first, and seems unwilling to verbally introduce himself. But, when I offer him use of my keyboard, he condescends to type out his name: HdsLKJbj3p. Finishing his chocolate, he throws his candy wrapper aside and turns to me, daring me to ask what’s on my mind. He’s had a long and secretive career, and his distrust of the press before this moment weighs heavy on both of our minds.

“Skcherisqueek,” he says to me, and I can’t help but agree.

HdsLKJbj3p was born in this courtyard, and, he confesses, hopes to die here. It’s not that he hasn’t been elsewhere—as far as rats go, he’s done a remarkable amount of traveling. But from the way he talks about these places, I get the feeling he never really thought of any other corner of the world as home. He’d like to travel even more in his life, he tells me when I raise the subject, but for now, he’s happy in the domesticity of Henle life.

When pressed about his career, HdsLKJbj3p is wary. He’s committed to his decision to finally come on the record about himself, but I can tell he only chose to do so now that he’s entering the autumn of his life at the ripe old age of 19 months. For years (well, year), he has closely guarded his anonymity, known only by the individual achievements of his striking career, such as “the rat that scared my roommate and made her cry that one time” and “the noise in the bushes that always makes the dogs people walk in Henle courtyard go crazy.” Though performance art pieces such as these have touched the hearts of their audiences, HdsLKJbj3p has always been careful to keep his own identity separate from them.

Throughout our interview, HdsLKJbj3p seems on the verge of calling it off and scurrying back under the loose brick from which he came. Only through frequent offers of bits of cat food can I build the trust necessary to keep the interview going.

I ask HdsLKJbj3p why, after all this time, he’s finally decided to come forward. He must have known the question would be coming, and at first he only sighs. I offer him a spoonful of Kitty Meals brand classic Oceans of Delight Tuna and Whitefish Paté and, as he cautiously accepts it, he begins.

“Cheesqueechkchsh,” he tells me, confirming a suspicion I had secretly been nursing since he had first agreed to meet with me. “Squeaeechkishchu eeks.”

When HdsLKJbj3p had started his career as a Georgetown rat, it was only a passion project. He never saw himself having any real impact on the world. It was pure art, made for the joy of expression, without agenda. But HdsLKJbj3p has noticed the increased attention his work has received. People have been talking all across the Henles about his hijinks, warning each other to watch out for the rat before they leave their homes. The maintenance call that my downstairs neighbor made just the week prior, he confides to me, had been prompted by her discovery of a hole in her wall behind the fridge—a hole which he, in his frequent trips in and out of her Henle in search of food, had noticeably widened. With an increased platform and ability to influence the world, he feels, it’s only right that he be prepared to take personal responsibility for any harm or terror he might cause students. “Squeeksh chrksquek,” he says. “Squacheeksh.”

It’s hard to hold these mistakes against HdsLKJbj3p, though, especially in light of the recent and unexpected changes to his living situation. “Queek skcherisk,” he tells me, referencing the influx of students this year following Georgetown’s return to in-person learning, a change of which he, being neither literate nor in possession of a Georgetown email address, had no foreknowledge. The few students living on campus during the 2020-2021 school year were reasonably used to rats such as himself, and the relative degree of emptiness on campus allowed him ample opportunity to explore his art without consequences. Now, the amount of feet around Henle is cramping his active hours. It has been hard for him, in the midst of such major lifestyle changes, to make his transition to new habits as seamless as he wishes it had been.

At one point during the interview, a group of people pass by on their way into the Henle tower nearest us. I recognize them as neighbors and wave, and HdsLKJbj3p shoots them a nervous glance. They respond with a look that might be read as, “Why are you sitting on the concrete next to a rat and giving it spoonfuls of paté?” But, given the weight of this interview with such an enigmatic artist, I know what the look actually means—and the malice and judgment it entails.

HdsLKJbj3p never uses the word “canceled” during our talk, but it seems to be on his mind. Once the campus darling, having been featured more than once on Instagram pages like @georgetown.hotmess and running across the feet of local celebrities, his recent fall from public grace has been hard for him. His anonymity has helped him manage the bad press, of course, but hearing the euphemistic complaints made about “that rat” have always been hard for him to stomach. At first he laughed it off, but over time years, the scars of public commentary and rejection have accumulated. “Chrksquek squacheek,” he says, mirroring comments of other public figures whose supporters have publicly turned on them.

Though HdsLKJbj3p’s first public statement may seem too little too late now, after having interrupted so many students’ walks home from Lau with moments of fear as he scurries past, he hopes there is still time to make amends. He’s stepped back from his art in recent weeks, taking the time to reflect on how his actions impact the world around him and what responsibility he may bear for the rat-related fear Georgetown’s humans harbor. His career, however, is far from over. “Ksheesqueech cherisqueek keeptch,” he tells me, and he seems to mean it.

He knows he is getting old, and that making it past two years would be a remarkable feat for a wild rat. He feels, though, that he has a responsibility to ensure that Georgetown’s campus is a safe place for those who will come after him. His most recent daughter, who, he types out on the keyboard, is named KjcuNJhmM4joi, deserves to feel safe and comfortable in the Henle courtyard where the family has lived for so long, rather than bearing the weight of her father’s notoriety. So, too, do her 1,254 older full and half-siblings.

When the interview comes to a close, HdsLKJbj3p seems satisfied. He has far more personal work to do, he knows, but coming forward publicly to take credit for what he has done has been a major first step. To him, accountability is of the utmost importance, and it’s long past time he apply that to himself as well. “Skcheris squeak squochsk,” he tells me before he goes, with a melancholy but hopeful look in his eye.

this is hilarious I love it