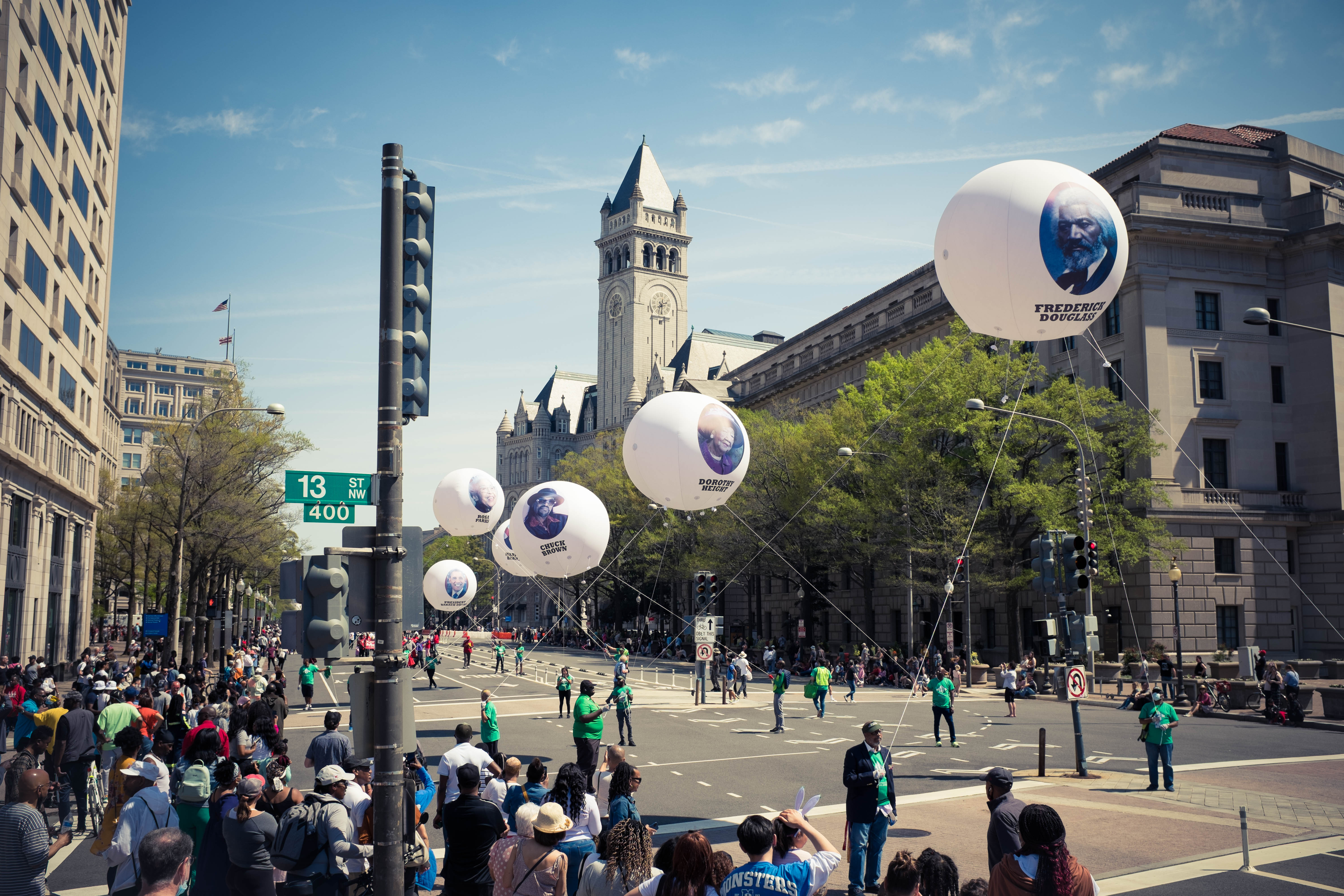 Thousands of spectators gathered at Freedom Plaza on April 16 to celebrate 160 years of emancipation in Washington, D.C. Two years after the pandemic postponed the Emancipation Day’s events, D.C. finally resumed its in-person commemoration of the District’s 3,100 enslaved people emancipated in 1862.

Eight months before the federal Emancipation Proclamation, Congress passed the D.C. Emancipation Act, and on April 16, 1862, President Abraham Lincoln signed it into law. The Act was the only “compensated emancipation” plan in the U.S., through which newly-freed Black individuals could receive up to $100 to aid emigration to other parts of the Americas and Africa. Many newly-freed Black individuals who remained in D.C. became waged workers.

“D.C. was the first [U.S.] territory where slaves were freed and compensated, and that is huge,” Angie Gates, director of the Office of Cable Television, Film, Music and Entertainment who leads D.C. event planning, said in an interview with FOX5. “There was history that was made here in the District of Columbia that we must recognize every year.”

Emancipation Day celebrations belong to a larger narrative. On the first anniversary of the D.C. Emancipation Act after the Civil War, the Black community organized a parade to commemorate the bill’s passage and demonstrate Black pride and political strength. Though Jim Crow laws and class divides curtailed celebrations throughout the 20th century, commemorations of the day  began anew in 2002 through dedicated lobbying efforts by Black activist Loretta Carter-Hanes. To ensure the date is committed to public memory, D.C. Emancipation Day became an official holiday in 2005 and has since been embraced as an annual D.C. tradition.

NuNu Wako, one Washingtonian attending the parade, emphasized the personal importance of celebrating D.C. Emancipation Day. “As a first generation African who understands the impact of slavery, not just on African Americans in the United States, but the actual continent itself and globally, celebrating Emancipation Day is not just about Black people,” Wako told the Voice.

“It’s about humanity, and the injustice that has been done to humanity, and the lack of recognition for it, for as long as it went unrecognized,” she added. “So, to be able to celebrate this every year, it’s a reminder that [such injustices] should never occur.”

The arduous road to D.C.’s emancipation is inextricable from D.C.’s own history of slavery. After D.C.’s creation in 1790 from land ceded to the federal government by Maryland and Virginia, two slave-holding states, D.C. became a center for the slave trade. Georgetown University’s continued existence is attributable to the sale of over 272 enslaved people, and many of its buildings were built by enslaved laborers and retain slaveholder namesakes.

As racial tensions escalated with the Civil War, thousands of Black individuals came to the District to escape enslavement in the South. Voices for the retention of slavery were strong in the capital, but voices of abolitionists demanding emancipation were stronger.

The pressure, urgency, and morality surrounding emancipation amplified, and the District made a decisive commitment in passing the 1862 act. As the Anglo-African, a New York-based, Black-owned newspaper recounted, “Henceforth, whatever betide the national, its physical heart is freed from the presence of slavery.”

This year, D.C. Emancipation Day returned to the District with celebrations over the course of two days. On April 15, organizers from the African American Civil War Memorial Museum launched the commemorations by reading the names of 3,100 individuals freed by the D.C. Emancipation Act.

That night, Westminster Presbyterian Church presented the “Remember the Pearl” event at Southwest Wharf, where 77 enslaved men, women, and children took on a bid for freedom in 1848 in the single largest recorded escape attempt by enslaved people in U.S. history. The Pearl, a schooner operated by captain Edward Sayers, set sail on the Potomac River for the free state of New Jersey with an escape plan created by D.C. abolitionists. D.C. slaveholders recaptured the ship and all escapees at its layover in Point Lookout, Maryland. Most of the escapees were sold into slavery in Southern states. But the legacy of the Pearl Incident lives on.

The following day, the Freedom Fest kicked off festivities with an art exhibition by Kristin Haye-Campbell, a descendant of a family captured from the Pearl. The Emancipation Day Parade on Pennsylvania Avenue and concert at Freedom Plaza followed, joined by D.C. Mayor Muriel Bowser, the Emancipation Commission, performers from Eastern High School, and an enthusiastic crowd.

Racial justice in D.C. still has a long way to go. “[The D.C. Compensated Emancipation Act] set the trajectory to end slavery across the United States,” Gates said in an interview with WUSA9. “And we’re still fighting for full democracy with becoming the 51st state.”

D.C.’s lack of statehood and incomplete enfranchisement is detrimental to Black communities.  Over 700,000 tax-paying residents, nearly 45 percent of whom are Black, are denied the right to Congressional voting representation.

Mia Young (NHS ’23), program director for the Georgetown chapter of Students for D.C. Statehood, explained measures to suppress the Black vote go back to the Reconstruction Era. “D.C. residents have to abide by laws that they had no say in creating, which is a gross violation of justice and democratic ideals,” she wrote in an email to the Voice.

Due to the importance of statehood to D.C.’s Black community, many supporters joined the Emancipation Day celebrations in favor of the cause.

“Denying D.C. statehood is a blatant attempt to water down the political power of people of color, particularly Black people,” Young added. “There is no doubt that silencing the voices of D.C. residents is inextricably linked to the legacy of slavery and racial injustice.”

Learning about the history of racial injustice in D.C. is only a stepping stone to active advocacy for progress in the District, particularly for out-of-state residents who can engage their own Congressional representatives.

“Locally, there are so many opportunities to get involved in grassroots organizing efforts and protests,” Young continued, explaining it is important for white people to understand the racial implications of denied D.C. statehood.

On the evening of April 16, D.C. Emancipation Day events concluded with performances from local musicians and a vibrant backdrop of fireworks.

“Over the pandemic, nothing was done. And it’s great to see all these people come out [today],” Wako said. “It gives me hope that moving forward, humanity is only going to get better, and not worse. I’m happy to see the diverse group of people that are out here.”

The March on Washington for Voting Rights confronts D.C.’s shadow of democracy