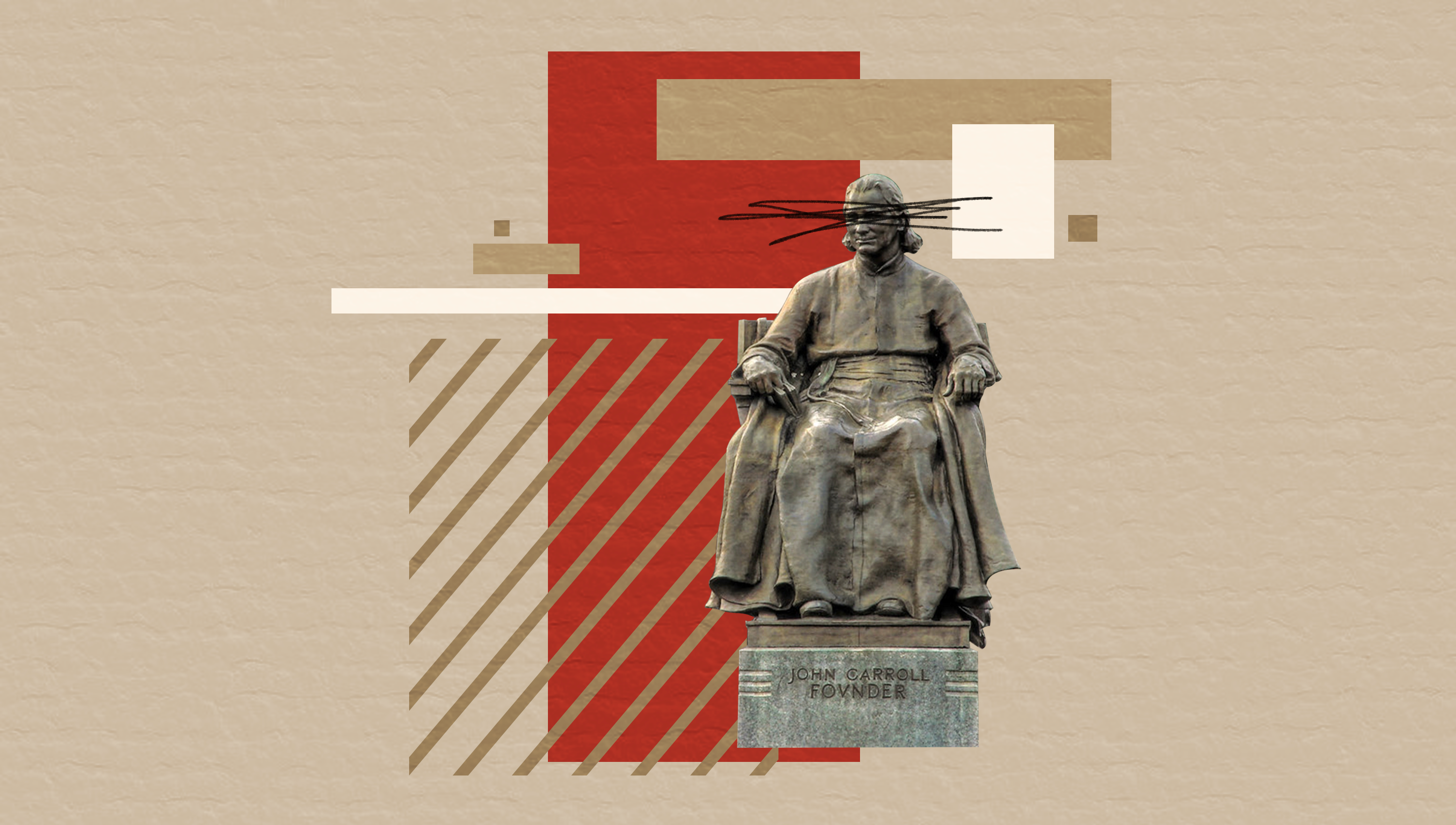 This editorial is Part One of a four-part series in honor of Black History Month where the editorial board discusses ways in which Georgetown must atone for its history of racism and change the culture of the university when it comes to race. For more, see Part Two and Part Three.

Despite repeated calls for reform and reparations, Georgetown maintains monuments to its long history of participation and complicity in enslavement. This alone makes it irrefutable that Georgetown continues to be deficient in basic human morality. As members of a community that actively benefits from the privileges Georgetown offers, the Georgetown student body must reckon with the wicked burden of the university’s past sins. This begins with tearing down the monuments the university continues to center—names, statues, and symbols alike.

Like many enterprises with ties to historical wealth, Georgetown’s rise in international pedigree has been predicated on the sacrifice and marginalization of many, key among them enslaved Black people. Collectively, the Georgetown and Maryland Jesuits owned and exploited several hundred enslaved persons across six plantations, and considered enslaved labor and the slave trade central economic drivers.

Perhaps the most well-known of its propagation of enslavement is Georgetown’s sale of at least 272 Black men, women, and children of the Jesuit plantations to cotton and sugar plantations in Louisiana in 1838. Often referred to as the GU272+, the enslaved persons faced awful conditions in the Deep South—many were beaten, raped, killed, or sold off again. The university pocketed the profits, making $115,000 (roughly $3.3 million in today’s currency)—money critical to keeping Georgetown’s doors open. Georgetown thus exists only as a result of the involuntary sale of Black people, a fact that the university must continue to reckon with to this day.

Physical reminders of this history with enslavement, both big and small, are littered throughout campus, as articulated in “The Price of Georgetown” digital walking tour developed by the Booth Family Center for Special Collections. The famous speaking venue Gaston Hall is named after the College’s first student William Gaston, who himself enslaved over 200 people and possessed his own plantation. White-Gravenor Hall bears shields commemorating several plantations as well as one that honors Br. Joseph Mobberly, S.J., who managed the brutal St. Inigoes Manor plantation and repeatedly justified enslavement with racist conceptions of Black personhood. The building itself is partially named for Fr. Andrew White, who committed ethnocide by founding one of the first forced missionary schools for Indigenous youth. Freshman dorm Darnall Hall is named after John Carroll’s mother Eleanor Darnall, who kept roughly 100 enslaved people inherited from her grandfather.

Furthermore, Arrupe Hall and the Reiss Science Building sit atop what was formerly College Ground, a segregated cemetery that held the graves of many enslaved persons as well as free Black residents from the Georgetown neighborhood. Although a fraction of the bodies from College Ground were relocated in the 1950s, hundreds of others remain unaccounted for—and built on top of. Despite construction crews finding a human femur during Arrupe’s construction in 2014, the university failed to disclose this history and context with the Georgetown and wider descendant communities.

Georgetown also continues to keep subtle, symbolic tributes to enslavement: As frequently touted by the tour guide society, Georgetown’s blue and gray school colors derive directly from Union blue and Confederate gray as a post-Civil War pledge to “unity.” Confederate symbology, however, is decidedly underpinned by racism—the lynchpin of the Confederacy was a desire to preserve and maintain enslavement as a tool of Black oppression and economic exploitation.

Perhaps the most obvious continued promotion of Georgetown’s past is the Bishop John Carroll statue sitting front-and-center at the university’s gates. He owned at least two enslaved persons, participated in the sale of up to four people, and managed Jesuit tobacco plantations built primarily on enslaved labor. Carroll’s foundational links with enslavement cast a dark shadow over a legacy that should be remembered, but not celebrated.

Even so, a tradition persists at Georgetown that completely disregards this past, incorporating his statue into the university’s popular culture. As a sort of rite of passage, all Hoyas, at one point or another, are expected to sit on John Carroll’s lap. While this may have started as an innocent tradition, it quickly becomes troubling when considering the Bishop’s distressing history. Put plainly, Carroll is an enslaver; being asked to sit in his lap is a deeply uncomfortable experience. Students—especially Black students—should not be socially obligated to sit on the lap of a man who did not believe in Black people’s right to live freely. Not only must this tradition be abandoned, but to truly reflect Georgetown’s understanding of the pain inflicted by its founder, it is necessary to remove his statue or move it to a less prominent location on campus, away from the grandeur of Healy Hall. By doing so, members and visitors of the university community will consider him as simply a part of the history rather than the face of Georgetown today.

Similar steps must be taken to address the namesakes of Gaston, Darnall, White-Gravenor, and all the other buildings tied to a history of enslavement, as well as changing our school colors. Georgetown is long overdue for at least a nominal commitment to atone for its deeply racist history. To actually create and foment long-standing change will require the support and strength of the entire Georgetown community. Critically, renaming these buildings must be done in widely public ceremonies so as to force the student body—and the public—to reckon seriously with university history.

The only notable step Georgetown has taken in regard to its monuments to enslavement was its 2017 renaming of two buildings that formerly paid tribute to notable Georgetown enslavers. Following significant student activism and the recommendations of the Working Group on Slavery, Memory, and Reconciliation, Isaac Hawkins Hall and Anne Marie Becraft Hall were named to honor the first enslaved man listed on the 1838 sale document and a Black woman who founded one of the first schools for Black girls in Washington, D.C., respectively. Yet despite these changes, the Georgetown student body continues to circulate colloquial substitutes—“JesRes” for Isaac Hawkins Hall, most notably—instead of the new building names, effectively dampening the cultural awareness that renaming should inspire. The student body also faces an imperative to honor necessary changes when they are made and to reflect an awareness of Georgetown’s history of enslavement in their own behavior. Calling Isaac Hawkins Hall what it is marks only the first page in a new chapter of reforming Georgetown’s residual honorifics to slavery.

Elsewhere, Georgetown must erect multiple permanent physical memorials dedicated to all of the enslaved persons who were forcefully made to build and fund what would eventually become the thriving university of today. One possibility is a memorial in the place of the John Carroll statue to value the involuntary sacrifices of the GU272+ and their lives. Another would be a memorial for the remembrance of the enslaved persons whose remains were ignored during the construction of Reiss Science Building and Arrupe Hall. While students have erected their own temporary memorials amidst inaction, the university must invest in a permanent display—only then can these stories and histories survive short-term institutional memory. Ideally, there would be a place set aside for descendants of these enslaved persons to reflect on and mourn the fate of their ancestors. This, once again, is merely a drop in the bucket of what Georgetown must do.

Finally, a measure to pay reparations to the descendents of the GU272+ by instituting an additional tuition fee of at least $27.20 per semester was passed overwhelmingly by referendum in the student body in April 2019. University administrators and the Board of Directors, however, have since stonewalled the progress of these efforts. This must change and the university must implement the reparations project in an expedient manner.

To retain the current monuments to enslavement is to pay tribute to slavery as an institution. Leadership must take steps to tear them down. However, the university’s connection to enslavement does not end with the administration. Not only did slave trading continue as a practice on the part of the Jesuits, but a significant amount of the student body also owned enslaved persons as well. Estimates indicate roughly 10 percent of the campus population at Georgetown was enslaved, and about 80 percent of Georgetown College alumni who fought in the Civil War were Confederate soldiers seeking to preserve slavery as an institution. Knowing this, the student body faces its own mandate to advocate and to reckon. As our country and our city consider dismantling their most explicit monuments to enslavers, we, too, must do our part in the long path towards justice. 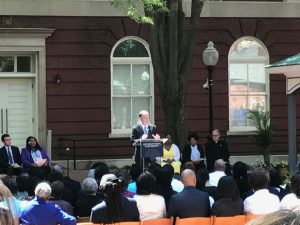