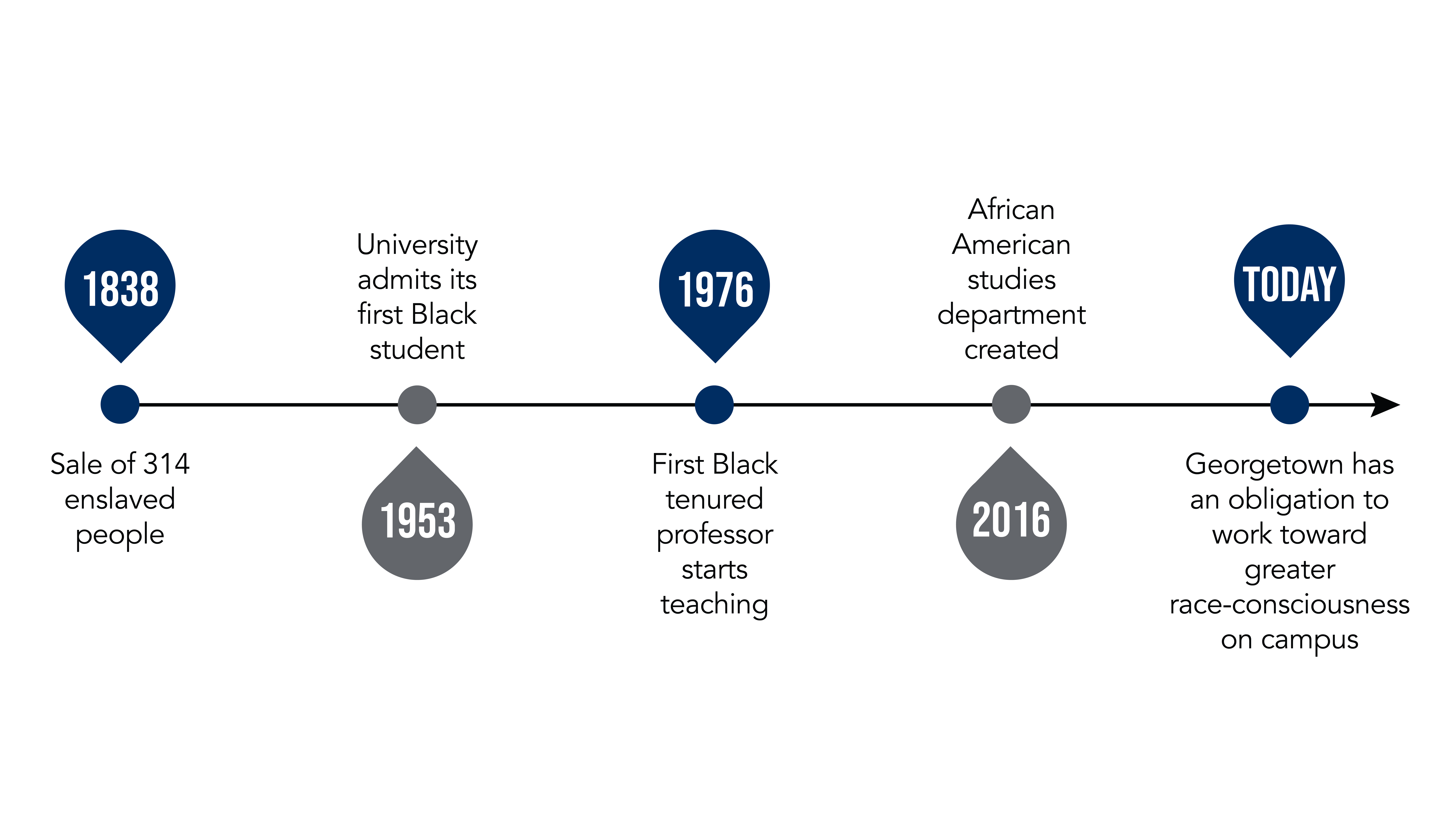 This editorial is Part Two of a four-part series in honor of Black History Month where the editorial board discusses ways in which Georgetown must atone for its history of racism and change the culture of the university when it comes to race. For more, see Part One and Part Three.

Georgetown cannot be an anti-racist institution until it educates its students in anti-racism.

The university’s racist history and its poor treatment of Black faculty, staff, and students blight efforts toward a racially diverse and inclusive academic and social environment. While some of the failing stems from the short institutional memory of its students, Georgetown is complicit in the lack of resources available to critically engage with its racist history and surviving racist policies. The university has an obligation to work toward greater race consciousness on campus.

In one of many steps toward a fundamental cultural shift, Georgetown must reckon with its institutional history and actively integrate anti-racism into its mission. This includes a reflection on past and horrendous wrongs, mandatory racial justice education for the student body, greater support for BIPOC students and scholars, and a good-faith effort at every level of the Georgetown community to reinforce these changes.

Georgetown’s complicity in American racism extends to its founding, including its sale of 314 enslaved people in 1838 and its connection to the Jesuit Maryland slave plantations, which financially supported the university. The administration has continuously failed to reconcile with the descendants of these enslaved people and has refused to establish a permanent memorial or implement the student-led referendum to establish a reparations fund for descendants.

In recent history, Georgetown has failed to take the necessary steps to create a safe space for BIPOC students and faculty on campus. The university did not admit its first Black student, Samuel Halsey, until 1953—and then only to the School of Foreign Service night school. The student population would not include a significant percentage of Black students until much later. The first Black tenured professor on campus, Dr. Gwendolyn Mikell, did not begin teaching until 1976. This historical discrimination has contributed to a disproportionately low number of Black students and faculty today. According to the 2019-2020 Campus Demographic Survey, only 6.3 percent of the university student body is Black, compared to 13.4 percent of the national population and 46 percent of the D.C. population.

Georgetown’s strides toward becoming a more race conscious institution have a short history of their own: The African American studies department did not exist before 2016, and working groups and officers committed to diversity, equity, and inclusion (DEI) have only proliferated within the past few years.

In an editorial published last year, the Voice called for a mandatory class about the GU272+ for all Georgetown students. All who attend this university must grapple with the fact that Georgetown was established and maintained through enslaved labor. Professor Adam Rothman’s course housed in the American Studies Program, “Facing Georgetown’s History,” allows just that, providing students with the opportunity to examine and engage with the Georgetown Slavery Archives and travel to Maringouin, La., where 90 percent of the inhabitants are GU272+ descendants. This semester, Rothman is continuing to educate students on this history in his HIST 099 section of the same name, a course that fulfills a core requirement.

These classes, however, are the only ones to directly interrogate Georgetown’s complicity in centuries of racial oppression, and exist within one of the smaller programs on campus. The burden should not be on the American Studies Program and African American Studies Department to teach about enslavement and racism to the entire student body. Instead, there should be a framework for all professors at Georgetown to incorporate this teaching across programs, in addition to a required class for all students.

Georgetown must also amend its global and domestic diversity requirement to include a class explicitly focused on race. Currently, several classes that do not directly engage with racial histories and transgressions count toward this requirement, which defeats its purpose. This diversity requirement course must be fulfilled on its own and not in conjunction with any other requirements. It is essential that students have a holistic education about race and its myriad interactions with historical narratives and sociopolitical structures before graduating. If Georgetown wishes to claim the cause of anti-racism, it must take active steps to educate its students to be anti-racists themselves.

Furthermore, the SFS Faculty Working Group on Anti-Racism recently released a self-review guide to professors to address biases in their syllabi and evaluate author diversity, subject diversity, and methodological diversity. Mandatory syllabi reviews could ensure professors are committed to teaching about racism. Anti-racism intersects with countless disciplines and must become part of the university’s academic fabric rather than a siloed field of study.

The university’s engagement with Black history cannot be limited to narratives of racial trauma and slavery, but should celebrate Black achievement as well. Dedication to fostering academic research that centers voices of color and avoids monolithic stereotyping is essential.

Along with expanding academic offerings for racial education, Georgetown must do more to foster a community of BIPOC scholars. Without actively uplifting BIPOC scholarship, the university contributes to the whitewashing narratives of Black and Indigenous history and to excluding academics of color.

Currently, there is neither an Indigenous Studies Program at Georgetown nor the opportunity to pursue Native studies in an academic setting. There are only two Indigenous professors employed at the university; professors of color in general are few and far between. The university also lacks programs for Latinx Studies or Asian American studies. Georgetown must create a space for these important fields of study to better support its community and foster an academic environment dedicated to engaging with racism and the intersections of race with all other disciplines.

Additionally, attempts to create a space for BIPOC scholarship often fail to support students. Last year, all of the Patrick Healy Fellows resigned from the fellowship run by the Center for Multicultural and Equity and Access (CMEA), citing issues of racism, sexism, classism, and queerphobia from the board. A program designed to “[address] issues that affect communities of color through a commitment to service, professional development, and alumni mentorship,” became a problematic and unwelcoming space for the students it meant to serve and support.

Georgetown must create and improve research and scholarship opportunities for BIPOC students on campus, paying them for their work and giving them access to the university’s resources and archives. This means an allocation of financial resources to make grants, stipends, and scholarships available specifically to BIPOC students. The university needs to actively publicize the resources they have available to students, particularly in regard to the university’s racial history via the Georgetown Slavery Archives.

Moving forward, it is also essential that the Georgetown community alleviate the burden it has placed on students of color to effect progressive change. Black students and faculty have been tasked with advocating for improvements on their own, including the Black Survivors Coalition’s calls for greater mental health support and resources for BIPOC students as well as improvements to the university’s inadequate handling of sexual assault cases. It is up to the administration, faculty, and student body at large to take action without laying the onus on Black peers. As the main source of institutional power, the administration has a special responsibility to take direct action without the prodding of student and faculty activists.

These actions must be understood in the context of Georgetown’s racial narrative, defined by a tendency to misconstrue its history to fit the social currents of the time. Despite its track record of racism, the university sought to save face following the eruption of Black Lives Matter protests in the summer of 2020, announcing a slew of new DEI initiatives and releasing sweeping statements about commitment to anti-racism. It remains to be seen whether a long-term commitment will back up those words.

Entrenched and systematic repression of voices of color and fragile support networks for BIPOC students will not be instantaneously transformed. These initiatives and others to follow are steps on a long path toward a more just academic and social environment. Any changes in the future will have to reckon with a legacy that makes the university an unsafe space for students of color and constructs barriers for faculty and staff of color.

The responsibility lies with the student body to absorb institutional changes and practice anti-racism in daily life. No amount of racial justice programming or mandatory coursework will create an anti-racist environment without students applying those principles outside of the classroom. But recognizing our shared past transgressions and taking the necessary steps to educate ourselves lays a surer foundation for a long-term and more faithful commitment to the values for which the Georgetown community ought to stand.