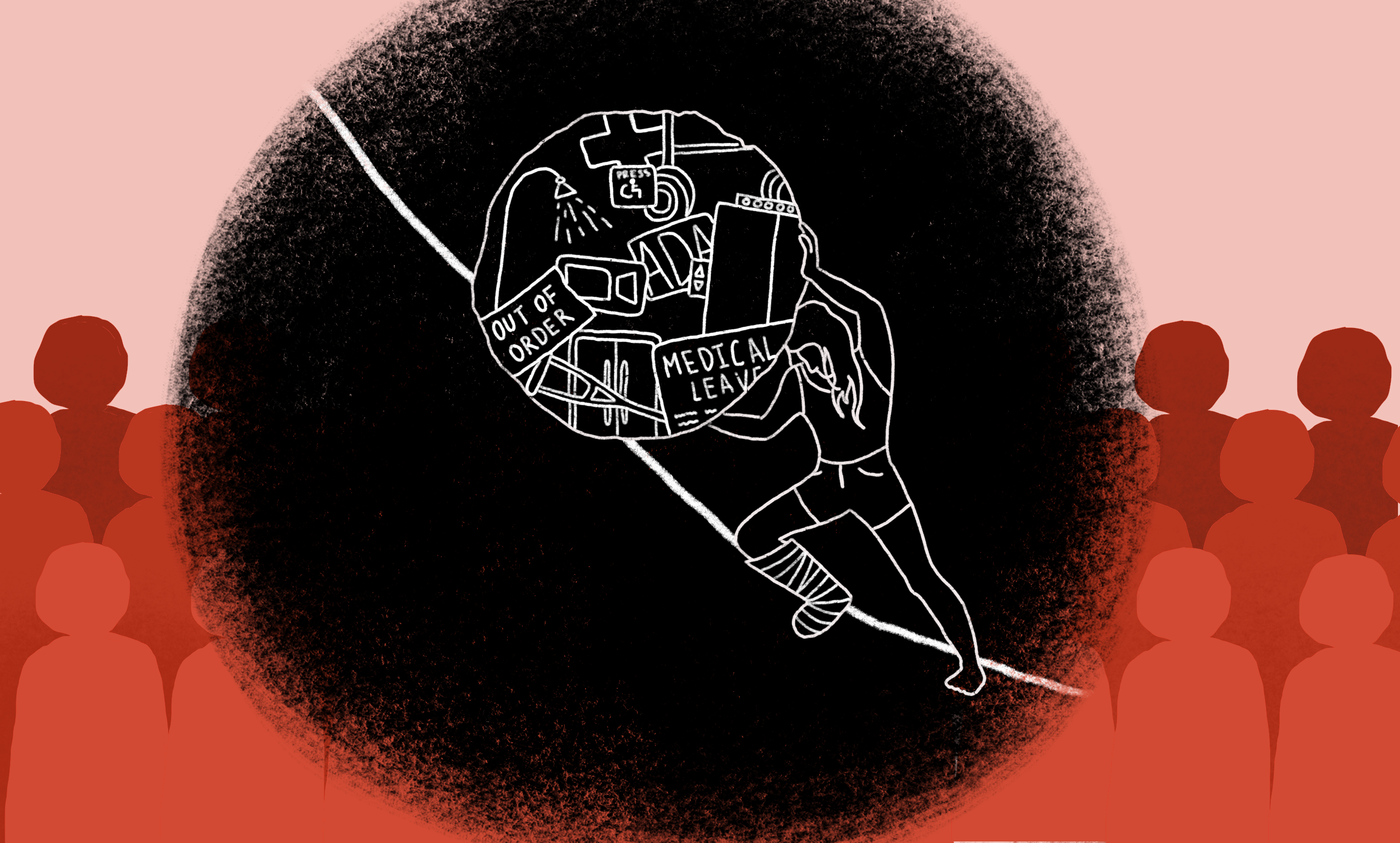 When people think of formative college experiences, I’m sure most don’t imagine trips to the emergency room and fractured ankles. I certainly didn’t, until one sunny Friday afternoon in March when I ate shit on a skateboard in the Village B courtyard en route to obtain a sandwich from Einstein’s. Instead of the sandwich, I obtained a trimalleolar ankle fracture along with a dash of character development and discomforting realizations.

I heard an ominous snap as I fell. Laying on the jagged cobblestones, all I could do was take shaky breaths as I reeled from the white-hot pain. The frat bros dartying a stone’s throw away paid no attention to my crumpled figure. Gritting my teeth through the waves of anguish, I could not help but morbidly wonder if this would be how I died, splattered on the ground with Drake blaring in the background. (Can you imagine dying to “Fair Trade”? That would be terrible.)

Luckily, after what felt like an eternity (time passes slower when one is in the throes of agony) an off-duty GERMS EMT passed by and called an ambulance. The next few hours in the emergency room passed by in a haze as I rapidly cycled through the different stages of grief. First: denial. That dissipated as I tried moving my foot and watched in horror as it lolled limply. Then, the anger and depression pummeled me in turns, until the doctor showed me the X rays, fentanyl-ed me up, and encased my leg in plaster. That evening, I was given crutches and unceremoniously discharged with the promise of surgery within a week’s time.

Breaking an ankle is awful enough; breaking an ankle on the infamously inaccessible campus of Georgetown University appeared to be a death sentence. Most students are vaguely aware of how disability-hostile Georgetown is—we crack jokes about the steep hike from Leo’s to Lau and the perpetually broken elevators—but we don’t often realize the severity of the situation. Just four years ago, Arrupe Hall (where I was living this past year) failed ADA compliance standards in 2018 because its doors require more than five pounds of force to open, with a majority of them lacking automatic “Push to Open” buttons. Student activists have been voicing their concerns and pushing for more accessible facilities for years, which has been a tedious process bearing limited fruit. Now, with a broken ankle and crutches, I would experience Georgetown’s physically inaccessible campus firsthand.

Beyond the unaccommodating infrastructure, university offices were astoundingly unhelpful in helping me navigate the rest of the semester. Without a car, I had no way of getting back to my dorm post-operation, as I would be in a wheelchair. I called GERMS, GUPD, Transportation Services, Safe Rides, literally any agency I could think of, and was met with nothing but cold administrative indifference. Returning to class after my fracture, some of my professors refused to set up Zoom classes and enthusiastically suggested that I take medical leave. Being told to drop out for the semester was discouraging, to say the least. Residential Living was unresponsive to my repeated requests for basic accommodations such as a shower chair. On crutches, it was impossible for me to obtain food at the dining hall without the assistance of another person, and I was informed that the university had no way of delivering food to my dorm (curious, considering that it seemed like the university had no difficulty delivering food to students in COVID-19 isolation).

The combination of the injury and lacking support system plunged me into a deep pit of depression and hopelessness. I was physically exhausted from the daily Sisyphean task of crutching up steep hills and experiencing Arrupe’s ADA noncompliance firsthand (the few automatic doors that Arrupe did have all broke down in April). I was mentally exhausted from the process of trying to glue the shattered pieces of my life back together. I spent hours lying in bed as schoolwork and medical bills piled up in snowdrifts around me (screw the bureaucracy-entrenched hydra that is the American healthcare system). I turned over the memory of falling on those cobblestones and being ignored ad nauseam and felt a righteous rage and loneliness in the face of the frat bros’ inaction.

As the days inched by, I became well acquainted with the feeling of invisibility that I had first experienced lying in the Vil B courtyard. I lost count of how many times people watched me struggle for minutes on end to haul open heavy doors with passive boredom pasted on their faces. I vividly remember one particular struggle: I was balancing precariously on wobbly crutches, when another student brusquely brushed past me and flung the door open. We made eye contact, they turned their head, and the door swung back like a boomerang, painfully clipping my injured ankle. I would fruitlessly pound the button to the Arrupe doors as students piled up behind me, eventually turning around to blank staring faces and meekly asking if they could perhaps offer a hand. It felt incredibly dehumanizing, to say the least. There’s nothing quite like the particular type of frustration that comes with having to beg and fight for every pitiful scrap of empathy.

This invisibility drew me back to a distant memory from high school. A teacher once showed my psychology class a video entitled “The Invisible Gorilla,” which appeared to be of some people passing a basketball, and told us to count the number of passes made. This wasn’t an ordinary basketball video, though. The point of it was that we were so engrossed in counting the passes that virtually nobody noticed the man in the gorilla suit who leisurely sauntered through the scene upon first watch. It sounded ridiculous—how could we have collectively not noticed the gorilla?! Yet the evidence was lying in front of us, a testament to the selective attentiveness of the human brain.

I found myself returning to the memory of that class as I crutched across campus. Perhaps to most onlookers, I truly was invisible. After all, our brains are exceptionally skilled—evolutionarily programmed, even—to process and filter the massive quantities of external stimuli that bombard our senses at any given moment. Perhaps since the frat bros were not expecting to see a girl violently wipe out in the middle of their darty, they failed to consciously perceive the event. The average Georgetown community member doesn’t actively anticipate running into someone on crutches, and so their brain effortlessly glosses over the sight. It would certainly explain the hostile architectural design of Georgetown. The university was built and designed by and for able-bodied people, with accessibility services simply a hastily slapped-on afterthought.

But while some of these depressing realizations chipped away at my faith in humanity, there were also many heartwarming moments that made me feel a sense of community and acceptance. Friends and acquaintances dropped off food or accompanied me on the arduous journey across campus to Leo’s. People held my hand and hugged me as I wept, lent me their ears as I blubbered incoherently and aired out my grievances, and offered shoulders to lean on (both literally and figuratively). Strangers would stop and strike up a conversation, recounting similar injuries of yore and offering me a warm smile or helping hand.

Once, a girl stopped me in the hallway and informed me that she had been in my exact position last semester, knee scooter and all. “Hang in there,” she said, “it’ll get better. You’re doing great.” I went on with my day, clinging on to those words like a lifesaver. I took comfort in the knowledge that other people had gone through this and survived, too. If they could do it, so could I.

So slowly but surely, I began to feel less alone. Perhaps it takes one to know one, but I found myself increasingly coming across similarly injured people on campus. Sometimes, it was in line waiting for the elevator; other times, I would spot someone in the wild slowly hobbling across campus.

In hindsight, I’ve come to the somewhat uncomfortable realization that I am also guilty of filtering out of consideration the experiences of others on campus—it would be nothing short of excessive hubris to deny doing so. Losing the ability to walk, I was thrown from a place of considerable privilege with no choice but to relearn how to live in a world not built with mobility-limited folks in mind. I think my initial discomfort and loneliness was quite indicative of how little concerns surrounding accessibility touched my life before the fracture. I never imagined that it would be possible to spend so many hours sending emails, making phone calls, and tracking down professors and university offices. Small things—more transparent communication between students and administration, updated websites and links to resources, more accommodating deadlines—could significantly make our community more accessible.

I hope that I haven’t been the other party in the various door-slamming incidents I’ve experienced. After all, nobody likes to think that they’re the bad guy. However, I suppose it isn’t fruitful to dwell too much on past actions and inactions. What matters is how we act going forward, and I’ve certainly noticed my behaviors shifting post-fracture. I’ve begun chatting with strangers that I bump into, whether it’s passing a compliment or a smile. Now, when I open doors, I make sure to always glance around for anyone nearby who might need a hand. And whenever I cross paths with another injured person, it feels like we’re united in a shared language, two members of a secret society with our casts and scooters serving as the identifying insignia. We’ll look at each other with a twinkle in our eyes and a smile tugging at our lips, a lighthearted exchange between two parties who share the knowledge of mutual suffering.

Breaking my ankle was a thoroughly miserable but eye-opening experience. I emerged from the ordeal more resilient, perceptive, and understanding. Let my experience be a reminder to all of us to be a little more conscientious of our surroundings and a little kinder to the people we cross paths with. I know that I certainly will be rooting for everyone that I see on a knee scooter or crutches. Life is hard when you’re mobility-limited, especially on a college campus that actively makes your very existence a daily battle. When the simple act of leaving your dorm is a task of monumental difficulty, something as small as a smile from a stranger can be the reassuring encouragement needed to get through the rest of the day.

Sitting in Lau during Finals Week this past semester, I was furiously typing away at a paper when I suddenly caught sight of another student slowly scootering across the library carpet, her foot wrapped in a plaster cast that matched mine. Seeing my situation mirrored back at me, I was struck with how far I had come over the course of the semester, and I couldn’t help but smile at the resilience of the mobility-limited community here at Georgetown. I’m rooting for both of our recoveries and a more accessible and open-minded school and social environment at large. The road ahead for both of those will be long, but every one of our individual actions carry weight and have the potential to create communal change.