Boo-Yah! Forward Boo Jackson leads the Hoyas to Victory in her First Game Back from Injury 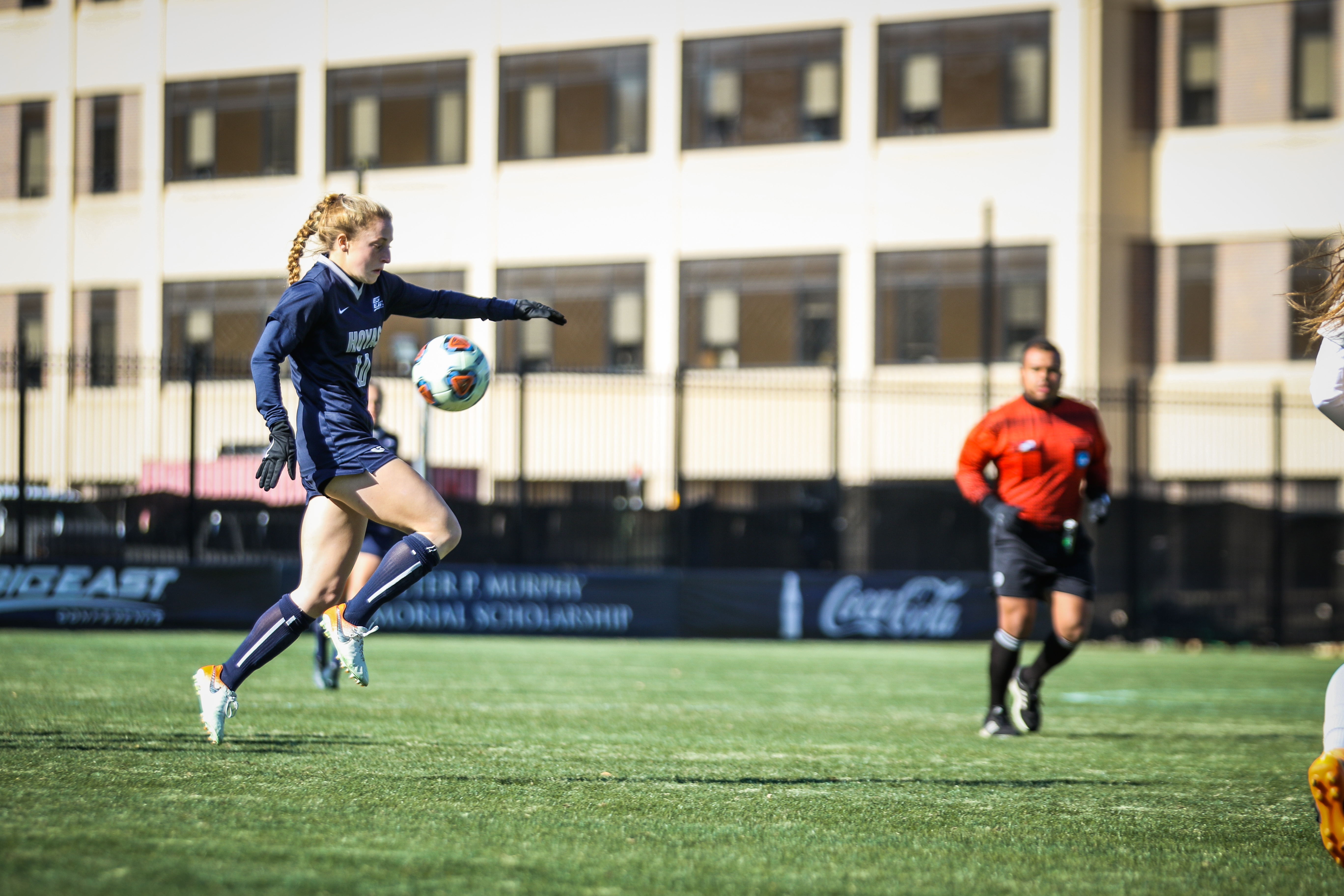 After drawing at University of Maryland (1-0-4) last week, the No. 17/13 Georgetown Hoyas (2-1-3) returned home to take on the Columbia Lions (1-1-1) on Saturday. Right from kickoff, the Hoyas put pressure on Columbia, with a shot on goal from senior forward Gia Vicari less than three minutes into the match. Georgetown’s fierce offensive attack was on full display all afternoon, with the Hoyas dominating possession for much of the game. To the Lions credit, they stopped a number of good scoring chances, blocking a shot from freshman forward Natalie Means in the fourth minute and a rocket of a shot off the right leg of freshman forward Henley Tippins in the 15th minute.

Although the Hoyas controlled the game for the first half, the Lions took every opportunity to counterattack, with a couple of high danger chances on breakaways, including a narrow miss by sophomore midfielder Sophia Cavaliere in the 9th minute. Despite a couple of uncharacteristic Georgetown turnovers, Columbia was unable to capitalize, all the while the Hoyas continued to apply pressure courtesy of junior midfielder Erin Martin who was seemingly always in the center of the action directing teammates and setting the table for the Georgetown offense.

In the 34th minute, head coach Dave Nolan opted to get Vicari some extra rest, subbing in graduate forward Boo Jackson, playing in her first match of the year after dealing with injuries at the end of the 2021 season. Jackson made her presence felt immediately—going up high to finish a beautiful crosser from sophomore midfielder Eliza Turner—less than a minute after subbing in. 1-0 Georgetown.

Georgetown ended the first half with nine shots (three on goal) and six corner kicks. Columbia meanwhile only had three shots (one on goal) and two corners, showing how dominant the Hoyas were through the first 45 minutes. The Hoyas forced Columbia to spend the majority of the first half on their heels, as Columbia rarely got any strong possessions on the offensive side of the ball.

Trying to even the score, the Lions came out guns blazing in the second half. The Lions pushed the attack with an increased tempo, attempting to get rushes down the pitch. The aggressive approach caught Georgetown off guard, as a bad touch on a Georgetown throw-in led to a Columbia corner kick in the 54th minute. On the ensuing kick, freshman goalkeeper Cara Martin made a fantastic save, batting the ball out of the air and preventing any chance for a Columbia header to tie up the game.

The Lions’ newfound aggressive tempo clearly took some getting used to for the Hoyas. In the 56th minute, Columbia freshman forward Maia Tabion had a rush up the left side of the pitch with room to run, but was fouled by senior midfielder Julia Leas, who was subsequently issued a yellow card—her first of the year. While Leas stopped the transition, the free kick following the foul set up an eventual Lions corner kick and  an open scoring chance for junior midfielder Grace Hurren. Hurren missed the net just high, but the pressure was on Georgetown.

The Hoyas were able to regain composure after the initial Lions rush, coming out of halftime with a couple counterattacks of their own. In the 68th minute, the pressure from Georgetown got to Columbia goalkeeper Elizabeth Matei who—in trying to prevent another corner—deflected the ball right to Georgetown sophomore forward Maja Lardner, who casually scored an insurance goal to put the Hoyas up 2-0.

Georgetown kept their foot on the gas with some beautiful team passing to move the ball all around Columbia’s half of the field, leading to a shot on goal by Eliza Turner in the 75th minute. Just a few minutes later, graduate defender Maya Alcantara came inches away from heading in a corner, but the Lions’ keeper was able to make the close save.

Columbia was down to their final 10 minutes, needing multiple scores to walk away with a draw, but the Hoya defense kicked into overdrive with next to no passing lanes open for the Lions. As Georgetown clamped down, chants of “Hoya Saxa!” and “We are Georgetown!” rained down from the crowd watching the game on the hot September afternoon. The final whistle sounded with the Georgetown Hoyas winning 2-0, moving to 2-1-3 on the year and the Columbia Lions falling to 1-1-1.

The Hoyas’ next game will be Sunday, September 11th, at 1 p.m. on Shaw Field against William & Mary. The home game will be an important proving ground for the Hoyas as they inch closer to conference play, which begins later this month. Follow @GUVoiceSports on Twitter for more updates and continued coverage of all Georgetown sports. 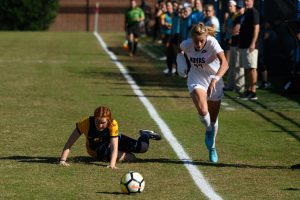 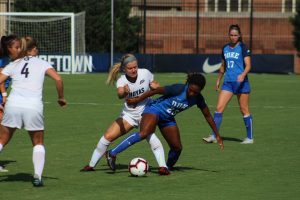