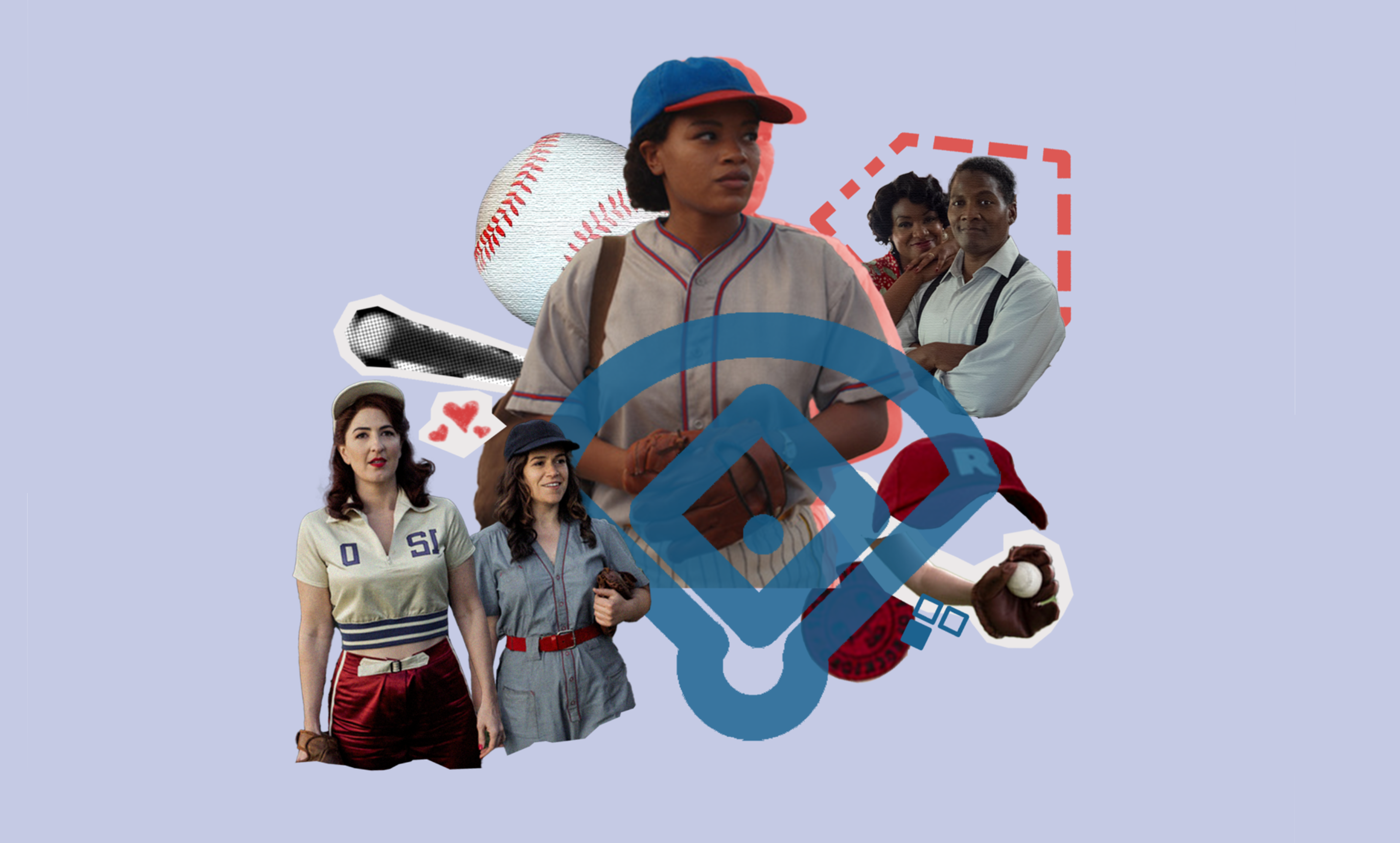 The year is 1943. With most men off at war, one question remains on every American’s mind: Who will play baseball? Enter the All-American Girls Professional Baseball League (AAGPBL), recruiting women across North America to play ball. A League of Their Own (2022) reframes the true story told by the classic 1992 film of the same name, paying homage to the well-loved movie while highlighting the stories of marginalized folks—especially that of Black and queer folks— in women’s baseball in 1943.

A League of Their Own, an eight-episode series released by Prime Video in August, primarily follows two baseball players—Carson Shaw (Abbi Jacobson), a white woman from rural Idaho, and Max Chapman (Chanté Adams), a Black woman from Rockford, Illinois—as they navigate the world of women’s baseball. Shaw’s effortless journey to success, as she quickly becomes the  unofficial coach of the Rockford Peaches, is juxtaposed against Chapman’s, who—despite her undeniable pitching arm—is barred from even trying out for the league due to racism on account of her skin color. Chapman’s refusal to back down leads her to eventually travel the country pitching for Wright’s All-Stars, a Negro League semi-professional team.

There may not be crying in baseball, but there is plenty of laughter. Loyal to its original namesake, the new series preserves some of the most iconic scenes, including the Peaches’ ladylike montage for the press and the dance sequence after the girls sneak out on night one. Heart and humor intact, the new show’s longer format—compounded by its brilliant writing—allows for deeper character development, and even more hilarious one-liners. Viewers will fall in love with Clance’s charm; cheer on Esti (Priscilla Delgado), a sweet-as-pie teenager from Cuba, as she learns English; and laugh with the team about Shirley’s (Kate Berlant) latest neuroses. League is truly a joy to watch.

While the show highlights the joys of baseball, camaraderie, and chosen family, it also tackles the challenges that came with being a Black queer female athlete in the 1940s. The decision to portray Max’s story alongside that of the Rockford Peaches distinguishes the series from its 1992 predecessor. In the original film, Black representation is reduced to a 15-second scene in which a nameless Black woman throws the ball back onto the field. The remake of League chose to fashion an entirely new protagonist to represent the strife of Black women in baseball in 1943, nearly five years before Jackie Robinson—the first Black man to play in the Major League—began playing for the Brooklyn Dodgers.

This refusal to shy away from suppressed stories also translates into a more expansive picture of sexual identity. League represents love between women—both romantic and platonic—with care and grace. The writers worked with the original Rockford Peaches, as well as other players, to tell their stories of queer existence in America in the 1940s. The result? Many varied portrayals of what “queer” could look like in this time—each complex, unique, and beautiful.

After falling in love with one of her teammates, Carson must reckon with her sexuality and reevaluate her marriage. Carson’s story unfolds alongside that of Greta (D’Arcy Carden) and Jo (Melanie Field), a pair of queer best friends who have lived in hiding for years at a time when queerness was perceived as a crime. Similarly, Max has spent years sneaking out at night to meet women in her mother’s hair salon. She struggles to find community as a Black lesbian until her uncle Bertie (Lea Robinson), whom she had previously known as her estranged ‘aunt,’ reveals to her how many others like him have managed to live authentically in spite of the discrimination queer people have faced.

League’s queer characters from generations ago don’t just exist, but also live and love. Historically, queer representation in media is lacking, and the stories of queer folks—especially queer women—that are actually told tend to be disproportionately trauma-based. League challenges these harmful tropes by displaying queer characters whose existence is neither an anomaly nor a plot device for straight characters. Greta and Carson fall for each other over the course of the season, sharing sweet stolen kisses and secret dates. Bertie and his longtime partner host events for other Black queer folks. Towards the end, Max goes on the road to play with her new team alongside Esther (Andia Winslow), with whom she has a budding romance. These relationships between queer people depict intimate moments with love and care at the forefront.

Despite League’s masterful portrayal of love between queer people, a portion of fans of the original film have flooded its reviews with negative and even hateful commentary towards the LGBTQ+ community. One-star reviewers have commented that the show represents “the woke agenda and its lies” and “an indoctrination film,” and is “offensive to girls who aren’t lesbians.” These comments make up a sizable 15 percent of the reviews—demonstrating how our culture is very much resistant to inclusive representation.

League also brings multiple beautiful examples of female friendship to the table. Max’s best friend Clance (Gbemisola Ikumelo)—an eccentric aspiring comic book illustrator—supports her through every rejection, and cheers the loudest for her victories. Conversely, Max also comforts Clance after her husband leaves for the war, and stands up for her at the market when she is ignored because of her race. Their platonic unconditional love fuels Max to keep pursuing her baseball career despite opposition, knowing she will always have a support system to fall back on when she stumbles. This honest portrayal of female friendship felt so impactful because it is not tied to any man or gossip, and instead exemplifies pure love and support.

Francesca Theofilou
Francesca is a junior in the School of Nursing, and the Halftime Leisure editor for The Voice. She has been described by friends as a "jester," and has a love for the 2005 Mousercise CD.

By Nathan Chen and Roman Peregrino