As Americans await the results of the general election, Hoyas prepare for an election of their own: GUSA elections. Three candidates are running for the Executive, the branch of GUSA responsible for overseeing policy chairs and cabinet operations; they also act as the student body’s primary form of communication with the administration. Polls open on CampusGroups Thursday, Oct. 10, at 10:00 p.m. and will close Saturday, Oct. 12, at 10:00 p.m. The ballot uses a ranked choice voting system similar to last year’s, meaning that students will rank the candidates.

Each of the three tickets shared common themes, including increasing GUSA’s transparency,  communicating with student groups and platforming the work of student activists’ work, and acknowledging the limitations of the Executive. The Voice sat down with each ticket to talk through their key policy platforms, budget plans, and overall goals. 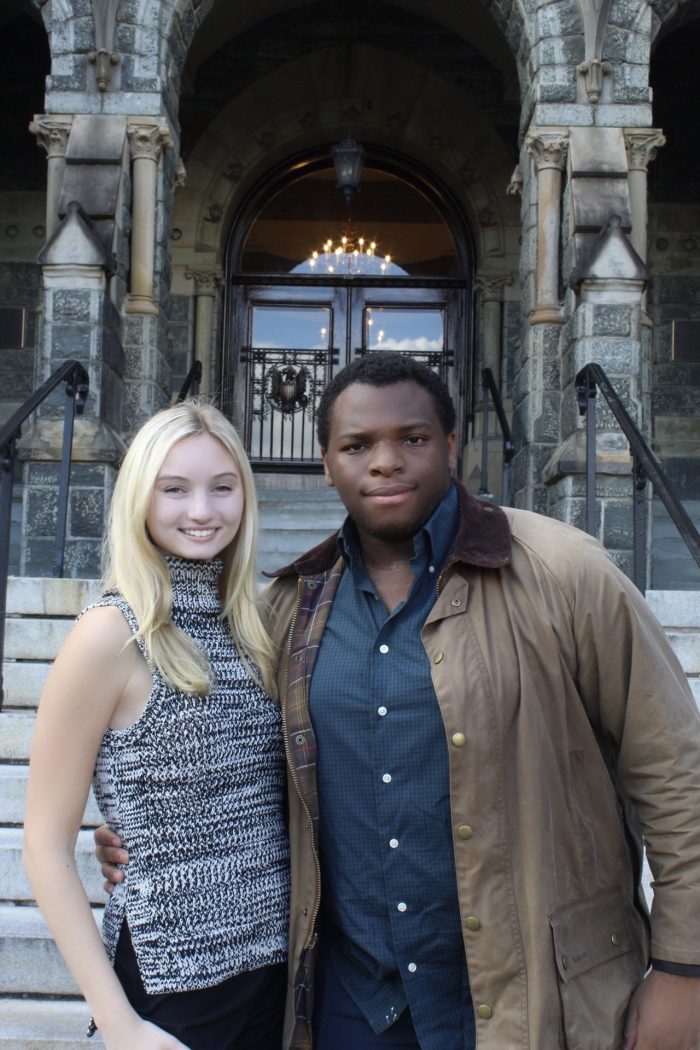 Photo supplied by the Pasieka/Achebe campaign

Achebe and Pasieka are both familiar with the inner workings of GUSA. Achebe served as a senator for a year and currently serves as the Vice Chair of Finance and Appropriations, and Pasieka is a member of the current Executive’s senior staff.

The two have begun conversations with organizations on campus like Georgetown Renewable Energy and Environmental Network (GREEN) and the Coalition for Workers’ Rights, and aim to reach out to every campus group if elected. They hope to take up an “easy-to-implement” plan to increase communication with student groups as well as transparency and trust in GUSA: weekly or daily Instagram posts to record every event happening on campus. “We hope to have an open line of communication with every student group that wants to talk with GUSA,” Achebe said.

“Kids are so siloed based on what they’re studying,” Pasieka said of how events are advertised to students in different schools. The duo hopes the Instagram initiative will also increase representation for marginalized groups on campus.

Their platform also includes creating a better relationship between students and facilities staff, who the two highlight as “underpaid and underserved.”

The two also critiqued the administration’s recent pledge to provide $400,000 to support community-based projects in response to the GU272+ petition, arguing that it took a significant amount of time, without significant student input, and that the amount of money may not be sufficient. “We want students to be able to give feedback [on initiatives],” Achebe said.

“This needs to be a Georgetown for everybody,” Pasieka said. “It’s not going to happen overnight, but it starts with putting money where our mouth is.” 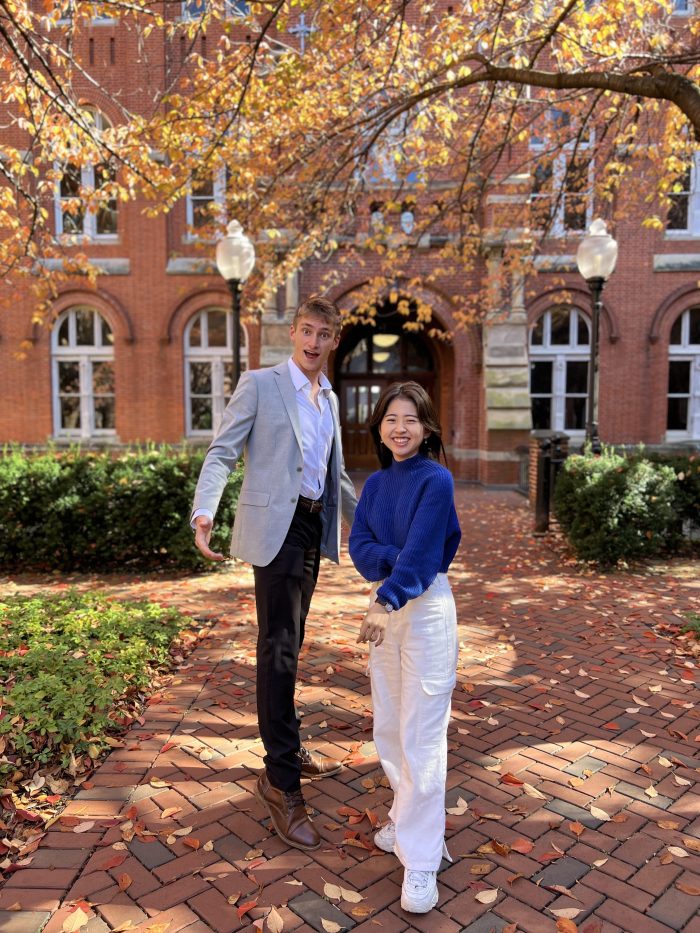 Photo supplied by the Vincent/Hirai campaign

The Vincent and Hirai ticket emphasized their experience in GUSA. Vincent, the current Speaker of the Senate, has been a senator since his freshman year, and Hirai has been a GUSA senator-at-large for the past two semesters. “We want an executive that knows what they’re doing, knows which projects are feasible and not,” Vincent said.

The two have spearheaded GUSA initiatives in the past, and plan on continuing several projects. Hirai is in the process of developing implicit bias training for underclassmen in collaboration with the current GUSA Executive and the SFS Diversity, Equity, and Inclusion (DEI) Office and other faculty. Vincent was a key player behind the Metro U-Pass pilot program that launched this fall. The two highlighted their experience as an asset. “We know who to talk to,” Vincent said.

The duo hopes to tackle the lack of transparency within GUSA. They have created a three pronged strategy to increase communication with the student body: FAQ documents for salient student issues, updating the GUSA newsletter, and relaunching the GUSA website.

The two also plan to utilize GUSA’s budget to allocate more to direct impact initiatives as well as organizations like the Hoyas Advocating for Slavery Accountability (HASA) and mutual aid groups—organizations that don’t receive university funding.

They also hope to redirect more funding to Georgetown Scholars Program (GSP) students for extracurricular activities that the university may not consider necessities—like basketball tickets. “There are so many issues that disproportionately affect people in GSP and other underprivileged communities,” Hirai, who is a GSP student, said. “We want to see a student government that works for the interests of our students.” 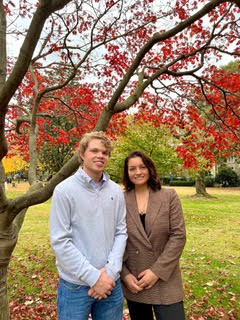 Photo supplied by the Woodall/Caraiani campaign

Woodall and Caraiani have adopted an approach focused on both GUSA experience and fresh perspectives. Woodall is a GUSA insider—he is currently serving as Vice Speaker of the Senate. Caraiani, by contrast, is a GUSA outsider. “Spencer has so much experience and so much drive, and I provide an outside perspective as someone who is a club leader and a part of several affinity groups on campus,” Caraiani said of the duo’s strengths.

The two have a unique strategy for achieving some of their goals: reorganizing GUSA’s executive discretionary budget. By eliminating the pay for an executive officer—and replacing their position with the unpaid labor of a senior staffer—as well as reducing the allocated money for GUSA retreats, the two hope to free up nearly $1,000 to put toward their proposed initiatives.

“We have a lot of wasteful spending on the GUSA budget,” Woodall said. “There are a lot of areas we could cut back and put back into the students.”

The duo hopes to put this money towards affinity groups looking to host cross-cultural events, a quiet room for disabled students, and more trash cans on campus. Caraiani, who runs Prospect Records, noted that there are several underfunded clubs on campus, with reallocating GUSA’s budget serving as an important first step towards achieving financial equity.

Their platform also includes advocating for increased Counseling and Psychiatric Services (CAPS) funding and mental health awareness on campus. They also want to develop a meal exchange program where underclassmen on the All Access plans can donate swipes to upperclassmen to reduce food insecurity on campus—potentially inspired by the meal swipe drive organized by Students Advancing Food Equity (SAFE).

The two also plan to unify advocacy for the GU272+ reparations through the Executive, although it was unclear the role student advocacy groups like HASA, who are actively working on the issue, or descendant groups, would play in this scenario. “The main way of getting the administration to do anything is if we’re the main advocacy group for the student body as far as getting the GU272 project done,” Woodall said. “We have a very important voice, and if we can get the rest of the student body behind us, that’s how we’re going to best solve this.”

They hope to avoid stonewalling from the administration by relying on them less and making GUSA more respected. “We’ll be outside the box thinkers,” Woodall said of placing pressure on administrators.

The two hopes their platform galvanizes votes through their realistic promises. “We can put stuff into action. We don’t care about perception,” he added. “It’s not about us, it’s about what we can do to help the student body.” 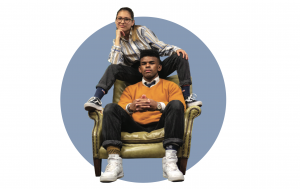