Two tickets are vying to be the next face of Georgetown’s student body, Nile Blass (COL ’22) and Nicole Sanchez (SFS ’22) and Daniella Sanchez (COL ’22) and Leo Arnett (SFS ’22). Whichever is elected as the new GUSA executive team will be tasked with representing undergraduate Hoyas—some of which the Voice surveyed about GUSA’s performance from Feb. 2020 to Feb. 2021.

The GUSA executive election, which will be held over the next two days,  marks the end of Nico Feretti (SFS ’21)  and Bryce Badger’s (MSB ’21) term as president and vice president. It comes after a year of fluctuating student opinions of GUSA as the student government responded to the issues of COVID-19 policies, financial aid, representation in the Senate, and racial justice.

The survey conducted by the Voice found that 45.5 percent of student respondents currently believe the GUSA Executive effectively represents the student body, while 18.2 percent disagreed, 21.6 strongly disagreed, and 14.8 percent had no opinion. Both tickets recognized the need to build trust and support in the student body, which has historically felt GUSA was ineffectual at best.

Both the Sanchez-Arnett and Blass-Sanchez campaigns aim to improve GUSA’s communication with and representation of students. Daniella Sanchez and Arnett are promoting a Student Bill of Rights, which includes ten statements to guide student relations with the administration and outline what students can expect from Georgetown.

“The Student Bill of Rights would fundamentally change the relationship between the administration and the student body,” Daniella said. “Right now a lot of the activism and advocacy work gets swept under the rug so easily, but with the student Bill of Rights implemented, we would have greater negotiating power for example, one aspect would be to have voting rights within different meetings.” On top of this, Sanchez-Arnett plan to restructure the GUSA Senate and draft a news governing document for the government.

These calls for change go along with student criticism of the GUSA Senate, composed of elected officials from each class year. Only 3.4 percent of respondents strongly agreed the Senate effectively represents students. 33 percent strongly disagreed and 28.4 percent disagreed, resulting in a disapproval rating of 61.4 percent. The class of 2021 was most critical of the GUSA executive, with 69.43 percent of senior respondents disagreeing or strongly disagreeing with its effectiveness.

GUSA, particularly the Senate, has come under criticism in the past for failing to represent racially diverse Georgetown communities and identities. In the 2021 survey, 20.9 percent of students agreed  the organization reflects student identities, and 43.2 percent disagreed. The rest of respondents abstained from answering the question.

One respondent commented on the improvement in GUSA’s reflection of student identities over the last year. “It is getting better! I feel more reflected by the women, low income, and students in the disability community too being there,” they wrote. 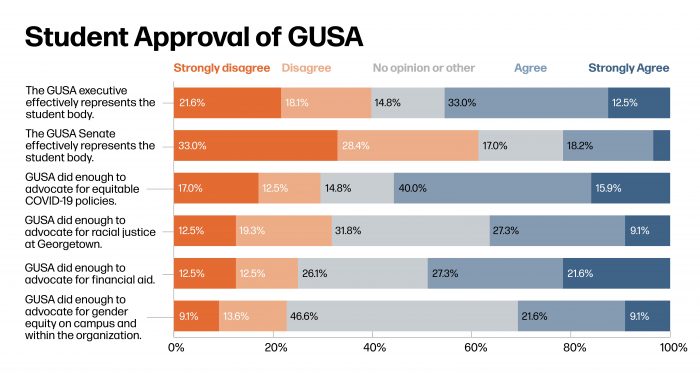 Blass and Nicole Sanchez have also responded to these criticisms, hoping  to improve student representation through a complete restructuring of GUSA. The ticket pointed out that GUSA’s main power lies in demanding meetings with administration that allow students to address issues directly, granting different student groups opportunities to communicate their own priorities. The candidates have a long term plan to begin abolishing certain elements of GUSA, including reforming the Senate and the executive.

Blass and Nicole Sanchez pointed to a culture of elitism and bureaucracy in GUSA that prevents real work from being accomplished. In their ideal world, GUSA would use a system where the organization’s power in demanding meetings with the administration is made more available to students outside GUSA. “I think that is GUSA’s biggest problem, is this bureaucracy, is this elitism, this thinking that they are people who have some real power,” Nicole said.

“That’s what the restructure is really all about. It’s about shifting the narrative, even shifting the power structures. A lot of the people that are on the restructure are student activists and student organizers. They’re people who have always felt excluded from GUSA, have always felt GUSA never spoke to them, have honestly screamed, abolish GUSA, that is what the movement is about,” she added. Nicole has been one of the senators leading the push to restructure GUSA over the last year.

In 2020, GUSA gained student support due from working with the administration on COVID-19 policies that impacted students. While one respondent pointed out that GUSA’s power is limited, 55.7 percent of respondents strongly agreed or agreed that GUSA did enough to advocate for equitable COVID-19 policies for students. 12.4 percent disagreed, and 17 percent strongly disagreed.

One student did not believe GUSA to be historically effective, but felt that the GUSA executive responded relatively well to the COVID-19 crisis. “The senate seems to be more concerned with internecine sniping, but the executive this past year actually seems to have gotten stuff done in this regard,” they wrote.

As part of their platforms, both GUSA tickets have plans to advocate for a safe return of students to campus in the Fall 2021 semester. The Blass-Sanchez ticket has emphasized COVID-19 response as one of their top priorities for the beginning of their term if elected. Both Blass and Nicole Sanchez have been involved in pushes that ensure Georgetown Scholar Program students and low-income students are supported during the pandemic, including extended deadlines for tuition payments. The candidates were also involved in meetings with the administration to secure loans of CRRSAA funds to students based on expected family contributions.

The ticket is also emphasizing employee rights during the pandemic. According to their website, the campaign wants to improve the “tools, resources, and institutional support necessary to remain in compliance with COVID-19 social distancing recommendations.” The ticket’s dedication to workers extends to those contracted by Aramark, according to Blass.

“We’ve been in several meetings in regards to workers’ rights and redeploy Georgetown and what’s happening with direct staff, but also Aramark contract staff and ensuring that they’re getting that living wage,” Blass said.

When it comes to COVID-19 policies, Daniella Sanchez, who is the current director of COVID-19 response,  and Arnett hope to focus on student accommodations and the grading system as students transition back to campus in the fall. They plan to ensure every student has an opportunity to get vaccinated, improve mental health resources, alleviate the burden on GERMS, and work with the administration to set on-campus health policies. According to their website, the ticket “will advocate for increased awareness of medical housing, and for the university to implement equitable health precautions that make all students feel safe.”

The campaign also aims to improve transparent communication between the university and students regarding university response to COVID-19. “What’s the testing plan? What’s the vaccine plan? So these are the immediate questions that we’re going to be asking and following through with and consistently pushing for,” Daniella said. “Communication from the administration is horrible and lacking even internal communication.”

When it comes to racial justice, 36.4 percent of students thought that GUSA did enough advocacy work, while 31.8 percent disagreed. During the summer of 2020, GUSA passed a resolution in support of the Black Lives Matter movement and passed an act in December to strengthen GUSA’s relationship with the Black Leadership Forum (BLF).

One respondent wrote that they believe some groups “just aim to get people to virtue signal so that they fit in with the narrative. The majority of the actions of GUSA and the Georgetown student body fit into this later category.”

Daniella Sanchez and Arnett’s campaign is committed to promoting racial justice on campus, and plans to continuously support the BLF fund, improve academic flexibility for activists, publicly communicate the results of the Race and Cultural Climate Survey from the spring of 2020, and pressure the administration to entirely implement the GU272 referendum.

Arnett believes that the results of the Race and Cultural Climate Survey will help GUSA listen to the needs of students rather than passing legislation that is not helpful to communities. “I think in the past, GUSA, and it’s kind of overbearing, usurping rule as it has in the past, has ignored really that understanding aspect and it’s just tried to implement,” Arnett said. “It’s a huge resource for us to actually understand the experiences that students are going through in order to better inform our policy,” he added.

The Blass-Sanchez campaign also offered a series of policy ideas to promote marginalized racial communities both on and off campus. The team hopes to partner with D.C. businesses for farmers markets, establish Georgetown holidays to celebrate racial communities, work with Asian and  Pacific Islander students to form an Asian American Studies Program, support Black arts, and increase the numbers of BIPOC professors on campus. The candidates have previously been involved in GU 272 advocacy, and are committed to demanding action regarding slave memorialization, community-based projects with descendants, and increased acknowledgement of Georgetown’s history in New Student Orientation.

Blass and Nicole explained that their experience in activist spaces, such as the Black Survivors Coalition, GU 272 advocacy, Black Student Alliance, or Black Lives Matter D.C.,  has shown them that communities on campus are clear what they want to advocate for, and GUSA’s role is to give students a seat at the table.

“People are very aware of their own situations,” Nicole said. “when you bring them into the rooms, and you ask them what they need, they can be very specific, and what they need, what resources they need you to provide, and in what dynamics you need to be involved in how they’re dealing with administration.”

“Center BIPOC voices by voting for us,” Blass added.

During the COVID-19 pandemic, one of the most pressing issues for many students is financial aid. Reduced student aid packages at the beginning of the fall 2020 semester resulted in pushback from students, and demands for increased transparency by the financial aid office. The university granted a 10  percent reduction in undergraduate tuition, which some members of GUSA argued would fail to help students with expected family contributions. Concerns over financial aid also come after the university announced a four percent increase in tuition for the upcoming academic year.

Daniella Sanchez and Arnett want to focus on increased transparency for financial aid as well as improving aid for undocumented students and LGBTQ+ students who may not receive financial support. “The university has the opportunity to provide creative solutions and simply provide these students with more money. Instead, they provide little to no assistance,” their website states.

The Blass-Sanchez campaign also wants to improve transparency for students seeking financial aid, especially as the pandemic impacted the economic circumstances for many families. “Post COVID, there are people who are typically upper middle class, both parents lost their jobs, their 2019-2020 records that Georgetown is using to calculate their need and their assessment there,” Nicole pointed out.

In addition to COVID-19, GUSA restructuring, racial justice, and financial aid, both the Blass-Sanchez and Sanchez-Arnett have extensive policy ideas regarding sustainability, Title IX, the disability community, LGBTQ+ resources, and the establishment of more academic programs. Polls for the GUSA Executive election will open at 10 p.m. ET on Feb. 25 and close Feb. 27 at 11:59 p.m. ET.