The New Face of DPS

On January 18, 2003, Kevin Curry, an African-American student at the University of Texas, had been playing the piano in the student union before a fraternity meeting when a white UT Police Department officer approached him. According to Curry, he left to go to his meeting. The officer followed him into a stairwell.

“I asked the guy for his information because I was going to report him, and he laughed in my face,” Curry said in an interview on Sunday.

Curry eventually reported the first officer for racial profiling, saying that no one needs identification in the student union because it’s a public building—so public, he said, that a wedding was held there the same day.

When the alleged profiling took place, Dr. Jeffrey Van Slyke, Georgetown’s new Director of Public Safety, was the chief of the UTPD. The Daily Texan, a student paper, reported on February 7, 2003, that the officer said Curry looked “suspicious” and “furtive.” The paper also spoke with Van Slyke about Curry’s racial profiling claim.

“I cannot change how somebody feels,” Van Slyke told the Texan in the February 7 article. “We are not here to be a feel-good people. People want to vent, and they feel like they have been mistreated. Truth and reality are different than how people feel.”

Years later, Curry is still angry about Van Slyke’s reaction, telling the Voice that Van Slyke dismissed his claims without serious consideration. In an interview on Monday Van Slyke declined to discuss the Curry incident.

A task force set up by UT’s president to deal with racial issues later recommended more diversity training for officers and a further review of possible racial profiling, according to a December 1, 2004 article in the Texan.
Curry was not surprised that the internal investigation did not find any evidence of racial profiling.

“Of course I know they’re not going to find anything. [Van Slyke] didn’t even care about it!” he said.

During the interview with the Texan, published on February 7, Van Slyke also chafed under laws that forced his department to make a report to the Board of Regents about the ethnicities of people to whom UTPD issued citations.

“If you are living in a predominantly black or Hispanic area, who do you predict will be stopped?” he said. “So when you release statistics on that, what do you think people can claim? There is no point of reference in how you can determine if there is any racial profiling.”

Statistics from UT’s Office of Institutional Research show that during the fall semester of 2003, a semester after Van Slyke complained about reporting ethnicity, African-Americans and Hispanic students made up just over 16 percent of UT’s student population.

Van Slyke became Georgetown’s Director of Public Safety on June 1. Letters sent to students and their parents touted Van Slyke’s experience with university security—running the police departments at UT and the University of Mississippi, as well his PhD in education from UT.

“Dr. Van Slyke came highly recommended from not only his references but from our research and questioning of individuals from the other universities and communities,” Vice President for University Safety Rocco DelMonaco wrote in an e-mail. DelMonaco said Van Slyke also received recommendations from law enforcement officials he did not work with and people he interacted with at his jobs.

Alleged racial profiling was not Van Slyke’s only brush with controversy during his six year leadership of UTPD, from 1999 to 2005. Under his watch, according to articles published by the Texan, the department was sued for using unnecessary force (article published July 11, 2003); investigated for misconduct by a university task force (April 19, 2001); and discovered to have sent an officer to report on a student group meeting (October 17, 2001). UTPD also bought shotguns and semi-automatic rifles, according to receipts obtained by Utwatch.org. Van Slyke himself was named in a civil suit for his alleged indifference to a sexual harassment complaint about an officer; the officer was later charged with sexual assault and acquitted, according to the Texan (December 9, 2003; June 18, 2004).

On Monday, Van Slyke refused to comment on his career at UT and Ole Miss.

“I’m not going to respond to any of the things that I’ve done in the past at other universities,” Van Slyke said. “I’d rather focus on what we’re doing here at Georgetown.”

The night bombs started falling on Iraq in 2003, UT graduate student Jonathan Bougie was on campus, chalking messages about an anti-war rally. Bougie said he knelt next to a concrete planter to write and felt a hand on his head.
“My head got slammed into the planter, and down to the ground,” Bougie said in an interview on Tuesday. “He put his knee on the back of my head.”

The man with his knee on Bougie’s head was a UTPD police officer. The officer claimed Bougie was about to flee and had to be subdued.

“I didn’t know what was happening, except that basically I was getting beaten up,” Bougie said. He said that the officer gave no warning, and did not identify himself as a UTPD cop until he was already on top of Bougie. Some officers charged him and his friends with criminal mischief, even though other student groups chalked the area with no repercussions, according to Bougie. He said the criminal mischief charges were eventually dropped.

Bougie filed suit against the officer, saying he used unnecessary force. In a March 21, 2003 Texan article, Van Slyke supported the officer, saying that he had followed police department procedure. According to an article published in the Texan on December 1, 2004, the officer admitted not following UTPD procedure by not identifying himself. He also said force was not needed. The officer was acquitted.

UTPD had clashed with activists two years before, in February 2001. A pro-life group, “Justice for All,” had set up an 18-foot tall display with pictures of aborted fetuses. Pro-choice protesters, including Professor Mia Carter, held a counter-protest in front of the display. Carter addressed the crowd with a bullhorn until it was confiscated by UTPD. She told the Daily Texan that the police hurt her face and neck in the scuffle (article published February 21, 2001).

A few days later, UTPD Lieutenant Julie Gillespie attended a pro-choice group’s meeting. She wrote a report for UTPD about the meeting, describing the group’s plan to continue protests in front of the 18-foot display, and Carter’s intention to sue the university. Gillespie’s report was revealed after UT’s student government filed a Freedom of Information Act request. The report was covered by the Texan on October 17, 2001.

The same article reported that the student government had filed a similar request the year before when a speech by Henry Kissinger was canceled. Trying to block the request, UT lawyers appealed to the state’s attorney general and current U.S. Senator, John Cornyn (R-Tex), saying that the documents, if released, could reveal the names of informants who had given the police information about planned protests of Kissinger’s speech. Cornyn granted the university’s request to hold the documents.

“There was definitely a sense of a close eye being kept,” Debbie Russell, the president of American Civil Liberties Union-Central Texas, said in an interview on Tuesday. Russell worked with student activists at UT while Van Slyke led UTPD.

On Monday, Van Slyke would not rule out using student informants at Georgetown.

“What I’ve done on other campuses doesn’t necessarily mean that’s going to happen here, and my focus is on what’s best for Georgetown University,” he said.

Professor Tina Fryling, the chair of Mercyhurst College’s Criminal Justice Department and a specialist in criminal justice ethics, said she did not know how often informants and officers are used to report on campus groups.

“I would say it shouldn’t be common, because the whole point of having a college atmosphere is for people to explore their beliefs, their ideas, do whatever they need to do within a group,” she said.

Georgetown President John DeGioia said yesterday that he only approved of the use of student informants and infiltration in rare circumstances.

“I could probably count on one finger in 20 years of knowledge when we’ve been comfortable with having somebody engage in a way that would not be rather transparent,” he said. He added that he was not familiar with Van Slyke’s use of informants.

When Van Slyke took over as the head of UTPD, officers already had pistols, but in 2002, UTPD added to its armory by buying ten AR-15 semi-automatic rifles and ten shotguns, according to a receipt obtained by UTWatch.org through an open records request. Van Slyke defended the purchases to the Daily Texan, saying that the department’s needs evolved over time. For example, he said, UTPD did not have pistols during a 1966 massacre of fourteen people on the campus and had to call the Austin Police Department for help. An FBI study released in 2001 ranked the University of Texas third-lowest in violent crime among America’s largest universities.

Van Slyke received his PhD in Education from UT last fall after successfully defending his dissertation about law enforcement ethics. In the dissertation, he describes unethical behavior he witnessed in university security forces: a cop plays Russian roulette with his revolver in front of colleagues, an officer and her boyfriend sneak into her boss’s office to “be tutored in biology,” and a policeman solicits prostitutes from his cruiser.

The dissertation also describes an incident of oral sex between a student and a campus police officer.
In Van Slyke’s dissertation, an officer discovered a woman after her car hit a stop sign.

The situation described in the dissertation bears similarities to an incident that occurred at UT in 2001, in which a UT student claimed that she was forced to perform oral sex on UTPD officer Sellers Bailey. In court, it was revealed that her blood-alcohol content at the time was 0.17. The officer was fired from UTPD (Daily Texan, May 2, 2003) and was eventually charged with sexual assault. He was later acquitted, in part because of his victim’s high BAC.

Van Slyke left UT in 2005 and took over the University Police at Ole Miss. His time there was notably quieter than at his last job. Van Slyke announced his resignation from Ole Miss in February, saying he wanted to move into academia, according to a Daily Mississippian article published February 18, 2008.

“The academia opportunities were not as prevalent as I first thought,” Van Slyke said on Monday. Instead, he became DPS’s Director on June 1.

DelMonaco, selected Van Slyke, according to an e-mail from University spokesperson Julie Green Bataille. Other administrators and students interviewed Van Slyke and other candidates and offered DelMonaco their advice, according to Bataille. In his e-mail, DelMonaco said a search committee reached a consensus on Van Slyke as their first choice.

Taylor O’Neill (COL ‘08), a former member of the Student Safety Advisory Board, is one of the students who met Van Slyke during the selection process.

“I was incredibly impressed,” he said. O’Neill felt that Van Slyke’s college-age children—his daughter is a senior at Ole Miss—gave Van Slyke experience in dealing with students.

O’Neill said controversies about Van Slyke’s past were never discussed during the interviews.

“I don’t know where that stuff came from, whether it’s true or not,” he said. O’Neill said he does not think Van Slyke’s past will be a problem at Georgetown.

While DeGioia would not comment on Van Slyke’s actions at other universities, he said the Department of Public Safety was committed to openness.

“We’re pretty public in our public safety,” he said. 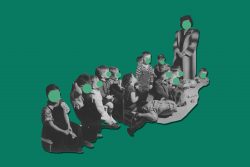 When it comes to child care, Georgetown must step up