In 1931, construction on Georgetown’s newest dormitory, Copley Hall, hit an unexpected roadblock: workers who were clearing a heavily overgrown area 100 feet north of the planned residence hall had uncovered a long-forgotten cemetery.
“Crumbling headstones are scattered over the ground haphazardly,” the Washington Star reported on January 24, 1931.  “Great slabs that once covered the graves of pioneer residents of old Georgetown have been shifted aside, exposing leaf-filled vaults, and sections of twisted ornamental fencing lie rusting on the ground.”

The graveyard, located on the land now home to the Reiss Science Center, had been used by the nearby Holy Trinity Church throughout the nineteenth century. The plot was small, though, and after the church purchased the larger Holy Rood Cemetery on Wisconsin Avenue, use of the older cemetery was phased out. By the 1930s, it had been forgotten and had fallen into disrepair.

Looking at the orderly, well-maintained Jesuit Cemetery that stands between Harbin Hall and the Intercultural Center, it’s hard to believe that Georgetown once also owned such a decrepit and overgrown plot. But the truth is, the University’s history of cemetery ownership is much more uneven than the tidy rows of austere, uniform headstones and the well-manicured lawn of the familiar Jesuit Cemetery suggest.

Its cemeteries are not without their own ghostly legends, either. Despite the decay and disrepair of the rediscovered cemetery, a few fairly famous names were still legible on the crumbling gravestones, like Jane Brent, the daughter of Washington’s first mayor, Robert Brent.  The most fascinating person interred there, however, was Susan Decatur, the wife of famed naval commander Stephen Decatur.

Decatur’s victories during the Barbary Wars and the War of 1812 made him a national hero.  After his military service, the Decaturs moved to Washington, where he served as Navy Commissioner, and the pair established themselves in the capital’s social scene, building the stately Decatur House for entertaining in 1818.

After Decatur was bested in a duel and expired of a gunshot to the abdomen, newly widowed Susan rented out the grand home to visitors and retired to a small cottage, located near the current site of White Gravenor. She converted to Catholicism in 1828, and when she passed away in 1860, she was buried in the small cemetery. Although her gravesite may have been forgotten, her legacy lived on at the Decatur House.  The building is frequently cited as one of the most haunted homes in the city, with many visitors claiming to have seen Stephen’s face in the window of the room where he died and heard Susan’s disembodied sobs.

Just a few years after being unexpectedly uncovered, the graveyard also became an established part of campus lore.  In February of 1939, The Hoya ran an article claiming that a century earlier “the burial place was a playground of strange apparitions known as ‘Witch’s Heads.’”  On hot nights, “transparent, luminous globes” floated over the cemetery, terrorizing students.

The Hoya’s explanation for these “Witch’s Heads” was that at the time, bodies were buried unembalmed in crude coffins, so their decomposition released gases, particularly phosphorous, that seeped through the ground and would hover above the graves.

Having rediscovered its graveyard, the University vowed it would not disturb the graves there, and would spruce it up. For over two decades, Georgetown honored its promise to preserve the cemetery, but by 1953 the pressures to develop the land became too great.  The University transferred some the remains to Mount Olivet Cemetery in Maryland, while others, including those of Susan Decatur, were sent to the other Georgetown-owned cemetery, Holy Rood Cemetery.

Holy Rood has served as the primary burial spot for members of the Holy Trinity Church during the late nineteenth and early twentieth centuries.  There are over 7,300 people buried there today. Most were from Irish working-class families, but many were black, including some slaves.

The deed to the cemetery had always been owned by then-Georgetown College, as was the case for most of Holy Trinity’s property.  In 1942, all of Holy Trinity’s properties other than Holy Rood were transferred from the University to the Archdiocese of Baltimore. The Arcdiocese “declined to accept” the deeds for Holy Rood, according to Georgetown University Archives’ records, “apparently in order to avoid the costs of upkeep.”

While the older cemetery may not have been the best-kept graveyard in town, it’s hard to imagine that Holy Rood Cemetery was an upgrade. Georgetown has been a less-than-enthusiastic caretaker of the grounds.  The patchy, browning grass is dotted with headstones and funeral monuments, which are mostly toppled over or sinking into the ground.  Weeds break through the asphalt path that winds around the hilly graveyard.  Leaves remain unraked, and untrimmed bushes overwhelm gravestones.  Although a sign on the ripped chain-link fence at the entrance instructs visitors to contact University Facilities for admittance, the two-foot wide gap between the fence and the cemetery wall makes it clear that the University does not seriously enforce this rule.

In 1984, the University announced it would be halting all burials at Holy Rood and closing the cemetery’s gates to visitors, except by special request.  Holders of burial rights sued, forcing Georgetown to honor their contracts. Family members of those buried at Holy Rood have long accused Georgetown of wanting to remove the graves and develop the property—and their suspicion was not unmerited.  Recently, local historian Carlton Fletcher found a 1984 letter from then University President Timothy Healy, S.J. declaring that, “The University must be allowed to convert this property from cemetery property to some other use.”

University Spokesperson Julie Green Bataille wrote in an e-mail that Georgetown currently has “no plan to develop the land for [U]niversity purposes.”

And Holy Rood isn’t the only cemetery Georgetown has considered repurposing.  Even the Jesuit Cemetery in the middle of campus—the oldest of Georgetown University’s graveyards and the resting place of over 350 members of Georgetown’s Jesuit community, including 17 former Georgetown presidents—has been eyed for its development potential.

In a 1964 memo to then-University President Edward Bunn, S.J., Georgetown’s Business Vice President T. Byron Collins, S.J. wrote that he had looked into the possibility of moving the bodies buried there to the cemetery at Woodstock College in Maryland. It would cost approximately $78,000, he concluded, but would free up an extra acre in the heart of campus, a property that would be worth “nearly half a million dollars.”  He recommended the project “for long range planning purposes.”

“Frankly, cemeteries are not the University’s business,” Charles Meng, then-Vice President for Administration and Facilities, told the Washington Post in 1984 when discussing Georgetown’s plans for Holy Rood.

For a University that has long been limited by space constraints, the open acres of undeveloped terrain are tantalizing.  But the logistic and legal challenges of removing remains have ultimately made development of the graveyards unfeasible.  Fifteen years after Meng’s declaration, a little more than 200 years after the first burial at the Jesuit Cemetery, cemeteries are still very much Georgetown’s business. 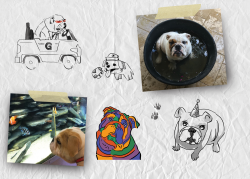 I just wanted to express my appreciation for being cited in your article.

The Wash Post archives show that on Dec 10, 1911, one Mrs. Nannie Franklin Polk was buried in the cemetery on campus. Wonder where her remains are today…