Imagine the soundtrack to a neo-noir thriller set at an upscale fashion show. Chances are you’ve thought of something pretty close to the Dum Dum Girls’ new album Too True. It’s at once glam-and-gloom, classic Blondie back from the grave, with frontwoman Dee Dee giving vivacious voice to palpable heartache.

Dropping into a lower register than previous releases, in the first track, “Cult of Love,” Dee Dee makes it clear that this is a serious endeavor with some banal truisms that pepper the album. They are present in lines like, “There is such bliss when you’ve no plan” in the track “Evil Blooms.” But Dee Dee infuses her lyrics with such gravitas that she manages to elevate the inane to the insightful.

And, despite the presence of these poppy clichés throughout Too True, Dee Dee also shows her chops as a lyricist. With lines like “Every moon is atrocious / Every sun bitter / Sharp love has swollen me up,” Dee Dee paints us a powerful picture. These words come from “Rimbaud Eyes,” an allusion to the French poet.

Raunchy reverb is present on most tracks in Too True, and it is highly effective. “In The Wake Of You” features highly danceable distortion. It’s a perfect track to get you out of those bad date doldrums. The album features a number of tracks that are both hazy and upbeat, especially “Lost Boys and Girls Club,” which has gotten a lot of attention throughout the blogosphere over the past few months, and for good reason. With a heavy kick drum and an ethereal pedal strum, it’s a lot like Imagine Dragons’ “Radioactive”: heavy and dark and angsty and oh-so-satisfying—particularly for anyone who’s just been dumped.

Though most of Too True is compelling, some tracks, like “Under These Hands” and “Are You Okay?” get trapped in the haze. Their dreamy synth and ever-present reverb feels lazy, like filler for what should have been an EP (like most of the Dum Dum Girls’ previous releases) rather than a full-length album. “Trouble Is My Name,” though thematically unifying, is, in this same vein, a boring end to the album. Rather than a satisfying caesura, its fade-out ending is like a half-finished sentence. Dee Dee declares “I had a vision” multiple times in the track, reaffirming the Dum Dum Girls as definitional dream pop. But, too often Too True gets stuck in its own dreamy ether, despite some truly artistic tracks. 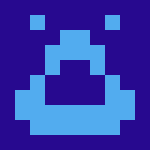