The words are printed on an unassuming white wall at the entrance of of Touch Me, the current exhibit in The Flashpoint Gallery. This new creation from the minds of installation artists Emily Biondo and Bradford Barr creates an interactive environment of light from the most basic form of human interaction: touch.

The exhibit’s composition is simple. The walls are lined with flickering white and blue lights, which are captured in translucent white cloth that is formed into pyramidal masses. Between these two grand masses are three pairs of plain woven gloves, hung from the ceiling by braided arrangements of copper wire and spaced roughly six feet apart.

Gently place glove on right hand, the text at the entrance read. I inserted my hand into the glove, noticing that the palms and fingertips were covered by metallic fabric. Touch glove hands with a person wearing the glove across from you. I held the hand of the person across from me, and looked around the room.

According to the description of the installation provided by the gallery, “individuals will have an immediate and dynamic effect on their surroundings by simply touching another person…the installation will begin to glow, change and flash, immersing viewers in a lit geometric space built by their own touch.”

I looked to the walls around me, hoping to see a glow, a change, a flash, but did not witness any noticeable difference. The space did not become markedly brighter. I stood in the middle of the installation, awkwardly holding hands with the person next to me, until the absurdity of the situation overcame us and we let go of each others grip.

In Touch Me, I observed negligible changes to the lighting of the installation, which was supposed to be sensitive enough to detect not only the actual holding of hands, but even the movements of hands within this basic interaction.

To be fair, it is possible that these changes would have been much more apparent if all three pairs of gloves were being utilized. But if that were to be the case, than the exhibit misses the true beauty of hand holding, which is a shared experience between only two people.

The exhibit felt as if it had been placed fairly haphazardly, and not in a positive, organic way. The wiring that connected the hanging gloves to the light bulbs along the walls was entirely exposed in its journey to the lights. It gave off a sense of disorder that did not seem conducive to the expression of something as pure as hand holding.

Ultimately, Biondo and Barr’s Touch Me was underwhelming at best. While the underlying concept behind the exhibit was interesting, albeit familiar, the execution was lackluster and prevented the installation from really achieving its potential.

This article originally appeared in the print edition of The Georgetown Voice. 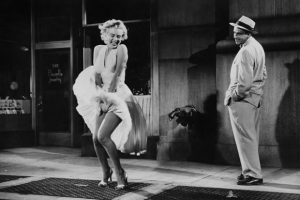