While I sincerely meant my reflections last week on how Netflix’s House of Cards has aligned with a deep public cynicism toward American politics, they were, nevertheless, a bit myopic in scope. Call it a kind of televised Americentrism, or maybe American exceptionalism adapted for the small screen—the idea, first, that America is all that matters and, second, that Americans’ perspectives on America are the only ones that carry weight. Veep, HBO’s venomous half-hour black comedy starring Julia Louis-Dreyfus as a gaffe-prone U.S. vice president whose ineptitude is outdone only by that of her entourage, repels this notion with flying colors. Created by Scotland-born satirist Armando Iannucci, the series, which concluded its third season this summer and will return next year, is proof that sometimes the most piercing insights come from those who stand apart and look in.

Veep’s success—the show has been nominated three years running for Outstanding Comedy Series and Louis-Dreyfus has twice taken home an Emmy for her performance—is also proof that the melodramatic Scandal and the weighty House of Cards haven’t yet cornered the market on the tone for televised depictions of DC. Indeed, a satire that still says something vital about the town—and about those for whom it is both office and home—might, in fact, do it best; Veep has been praised by politicos for its fidelity to how Washington insiders actually behave. If the truth is stranger than fiction, at least in the case of Veep, it also may be just as funny.

It is also consummately democratic, both because it doesn’t rely exclusively on the particulars of American politics as fodder for jokes and because it prods irreverently at nearly every conceivable character and demographic in equal measure. In an interview with Jon Stewart, Louis-Dreyfus highlighted the lack of any identified political party to which her character belongs and a lack of explicit parallels to politicking beyond hot-mic gaffes, modernity, public backlash, international schmoozing, closed-door negotiating, publicity stunts, and dealing with the public. Veep wisely parodies political generalities rather than specifics—the only format for the latter has already maxed out with HBO’s Last Week Tonight with John Oliver and The Colbert Report and The Daily Show on Comedy Central. The show both universalizes and universally satirizes.

Like any enterprising politician or DC-based networker, Veep hasn’t been shy about leveraging its connections to attract a loyal grassroots audience. Louis-Dreyfus as Selina Meyer recently appeared in a comic video intro to the 2014 White House Correspondent’s Dinner alongside real-life Vice President Joe Biden. But if Veep is about the family of politics, it’s also about the politics of family. One of the show’s greatest effects has been to transpose, though satire, the rarefied world of politics into its baser, more human impulses: arrogance, jealousy, and dysfunction, yes, but also heart, courage, and family. A positive development has been the increased screen-time of Catherine Meyer (Sarah Sutherland), Selina’s alternately neglected and downtrodden college-age daughter who has come into her own as a strong force on her mother’s personal and political life this season especially. The show’s rapidly expanding cast as Selena’s presidential campaign gains momentum has mainstreamed several other formerly peripheral or itinerant characters, including polling analyst Kent Davidson (Gary Cole), the oft-antagonized White House staffer Jonah Ryan (Timothy Simons), and Selina’s businessman ex-husband Andrew Meyer (David Pasquesi).

Trafficking favorably in the more humanistic drivers behind even the most cold-heartedly ambitious public servants, Veep is an apt choice for Hoyas accustomed to the Hilltop’s political vibe as well as a subtle salve for newly arrived students not quite over their homesickness. But be warned: Veep’s brand of comfort comes with an edge. In the eighth episode of season three, entitled “Debate,” while the campaign staff contemplates leaking information about a rival candidate’s extramarital affair to the press prior to a televised debate, Catherine pipes up: “Call me naïve, but isn’t that unethical?” to which Amy responds, “You’re naïve, welcome to politics.” In Veep—and maybe in life—politics is never far from a punch line. 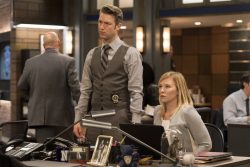