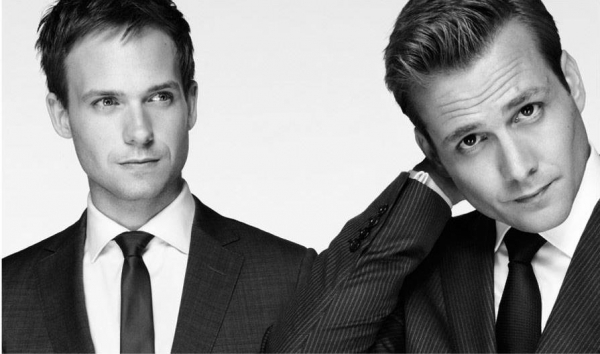 USA’s Suits has made a name for itself as one of the most clever dramas on television. The show’s premise concerns a brilliant college-dropout who lies his way into an interview for a top-tier law firm and ends up being hired by a partner. The show just wrapped up its fifth season, and it has proven to be an incredibly versatile and entertaining series, thanks to realistic storylines and likeable characters. Season 5, however,  proved to be a departure from the realism that made the show successful, and it is unfortunately clear that Suits should wrap up its run in the near future.

The first thing that makes the show likable is the characters. Creator Aaron Korsh proves adept at creating characters that audiences will instantly fall in love with, even if the writing can become repetitive. Leading the show is Patrick J. Adams as Mike Ross, the brilliant yet fraudulent lawyer. There is an interesting contradiction at the heart of the character: for a man who conned his way into becoming a lawyer, Ross oftentimes finds himself acting as the moral axis of the show.

His mentor, Harvey Specter, is memorable for his cocky demeanor and his win-at-all-costs approach to the problems he faces. Gabriel Macht gives a competent, if sometimes wooden, performance as Specter. Rick Hoffman steals entire episodes as Louis Litt, the overly-eccentric counterpart to Harvey. Louis is repeatedly used as the show’s wild-card, but his characterization is all over the place in later seasons. Louis goes from relatable to sympathetic to nasty in the span of a few episodes, and it becomes frustrating to watch inconsistent writing squander a fantastic performance.

The female characters of Suits are more of a mixed bag. The always incredible Gina Torres portrays Jessica Pearson, the leader of the law firm. While Torres’ performance is great, Jessica becomes a bit of a one-note character. Her characterization is extremely similar to Harvey’s, but seeing the two work together is still enjoyable. Sarah Rafferty’s Donna Paulsen is probably the best overall character on the show. Donna is smart, witty, and loyal to a fault. Although she is a little too competent at times, her character becomes surprisingly layered as the show progresses.

The final major female lead in the show, Megan Markle’s Rachel, is arguably the weakest character. Rachel starts off strong, but there just is not much chemistry between Markle and Adams, which makes the romance between Mike and Rachel extremely hard to care about, especially when their impending marriage becomes the focus of the show. The viewer never really gets to know Rachel outside of her undying love for Mike, which feels a little unrequited at times. This is probably Suits’ biggest flaw, as the relationship that is integral to the show’s success is often difficult to invest interest in.

The first three seasons of Suits are excellent examples of television drama. The will-they-won’t-they tension between Rachel and Mike works for the most part (the relationship really hits a wall when they get together), the season-long arcs are grounded in reality, and the characters are given fantastic villains to face off against, highlighted by the slimy Daniel Hardman. However, the show’s formula is wearing a bit thin at this point. Every single scene is essentially the same: a character walks into an office or meets another character, the two talk, and then one of the characters leaves after saying something dramatic. The most recent villain, Anita Gibbs, is annoyingly written because of how omniscient and evil she is without any real motive.

Moreover, the show has moved from realistic law-related plots to fantastical arcs. Is it really that hard to prove that Mike never went to law school? Plot threads, like Mike going to work in investment banking and Donna switching from working for Harvey to working for Louis are dropped and rarely referred to again. The show is still entertaining because of the characters, but it lacks the quality writing that made the first few seasons so successful. Suits was once a great source of legal drama and a somewhat plausible show, but now, while still entertaining, the show has become so overly dramatic that its end should be near.

The Case for Community: Part II