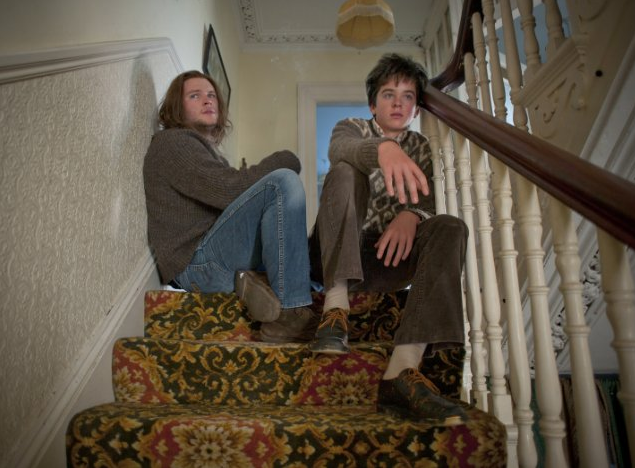 As Duran Duran streams from an old television set, The Cure crackles from record players, and cigarettes dangle from the lips of every Irish schoolboy, the setting for Sing Street comes into focus: Dublin, 1985. Music was big, and hair was even bigger. Director John Carney’s (Once, Begin Again) newest music-themed film explores the burgeoning music video industry in the ‘80s and its effects on the young and in love in Ireland.

Part coming-of-age story and part musical, the film follows fifteen-year-old Conor (Ferdia Walsh-Peelo) as he navigates the troubles of adjusting to a new school in the face of his parents’ seemingly imminent divorce. To distract himself from the bullies and harsh schoolmasters, Conor tries to get the attention of the gorgeous Raphina (Lucy Boynton) by asking her to star in the music video of his non-existent band. After scrambling to assemble a ragtag bunch of musicians, the band gives their first attempt at what turns out to be a both awkward and hilarious music video.

Walsh-Peelo does a remarkable job capturing Conor’s transition from a timid schoolboy to a confident and creative artist, with his initial trepidation giving way to a willingness to take firm control of his life. Boynton’s Raphina works surprisingly well with Walsh-Peelo’s Conor, given what seemed at first to be an awkward coupling. Raphina—sophisticated, beautiful, and mature—seems to belong with anyone but the gawky Catholic schoolboy. However, as Conor grows into himself and as Raphina is able to strip away the layers of makeup and indifference she has piled up over the years, their relationship grows into something both sweet and natural.

The most important relationship in the movie by far is Conor’s relationship with his older brother Brendan (Jack Reynor). Reynor slips easily into the role of protective older brother. From lending Conor records to listen to as “homework” to distracting him during their parents’ screaming matches, Brendan’s love for his younger brother is apparent. Brendan’s endless support for Conor, despite his frustrations over his own shortcomings, makes their relationship the most sincere in the movie.

Director John Carney has created a movie that charms yet lacks any true depth.  We hear about the death of Raphina’s father and the manic-depressive disorder of her mother, but we never really dig deeper into these issues or find out how Raphina has coped with them over the years. Despite failing to expand on the more serious issues in the film, Carney’s inclusion of musical interludes adds another layer of depth to the film. Carney succeeds through crowd-pleasing numbers such as “Girls” and “Brown Shoes,” and more poignant tunes like “To Find You.” Scenes in which Conor and his best friend Eamon (Mark McKenna) scramble to write each song whenever inspiration strikes possess both the innocence and the creativity evident in childhood. Moments in which Conor is truly immersed in the music allow him to step away from the troubles of his own life, even if only a short time before he crashes back into reality.

Despite a somewhat unrealistic ending, Sing Street triumphs in taking us back to a different time. The film is steeped in nostalgia without being overwhelmed by it. Although the plot is anything but original, the love story is heartfelt, and Conor’s call to music and journey to find himself make for an exciting adventure. After wowing audiences at the Sundance Film Festival, Sing Street will no doubt continue to remind viewers that to fail to pursue a passion is to not really live at all.