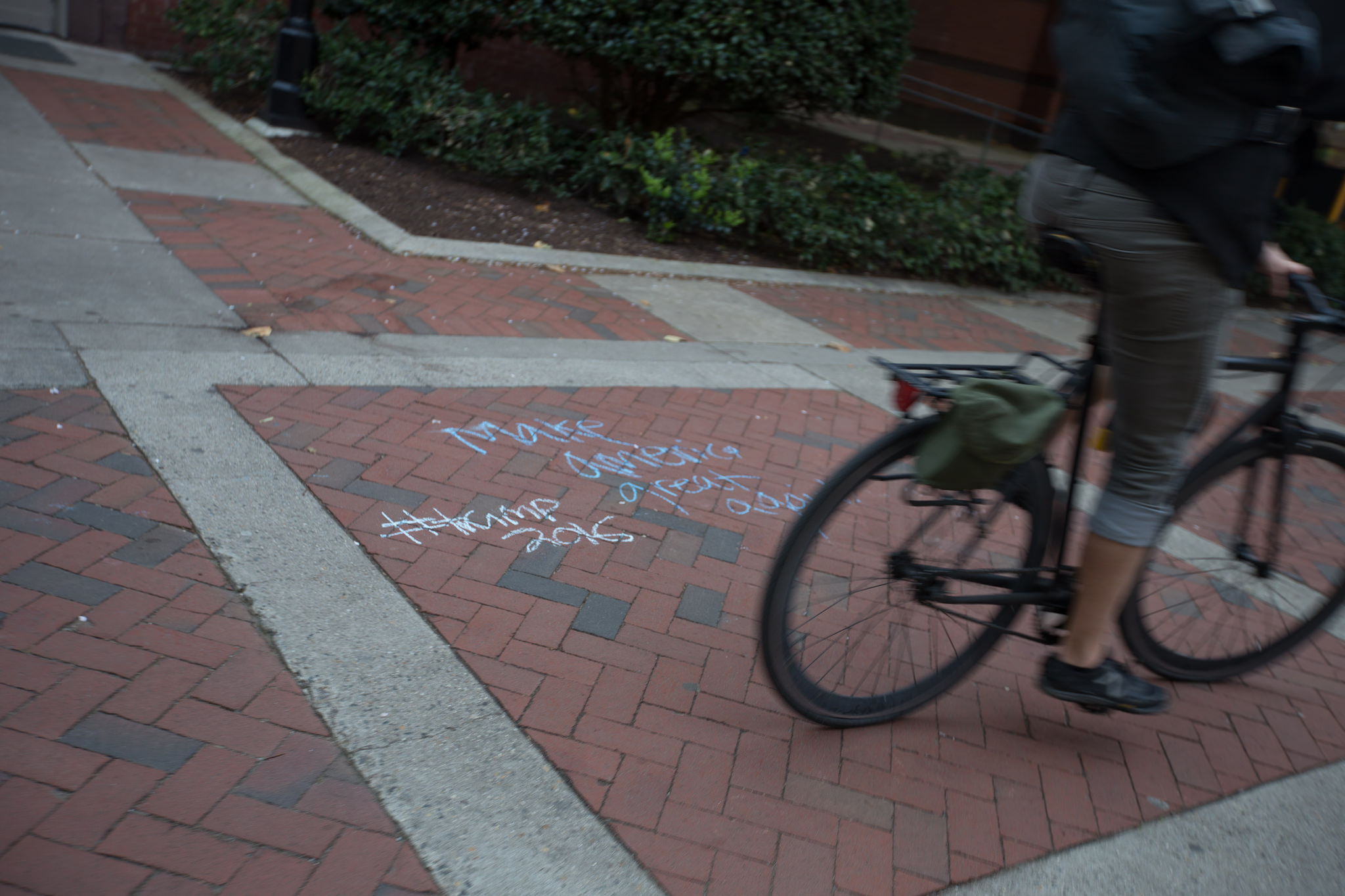 The death knell of irony may have officially sounded last month. In the wee hours of April Fool’s Day, a group of students slipped out of Darnall Hall to execute their plan. Chalk in hand, they scribbled satirical pro-Donald Trump slogans outside the ICC. That day, visitors to Red Square found a new table set up, where students in colonial uniforms with a hastily-assembled poster of Trump encouraged passersby to “Make America Worse Again!”—a pastiche of Trump’s actual slogan.

A clever observer would note that this all took place on April Fool’s Day. Or perhaps that the students manning the table were advising students to “Vote Trump, Greater of Two Evils!” But apparently, the joke missed its mark for a few people. The Tab, a student-run news platform, ran a hesitant article on the issue, unsure of whether the Trump table was a prank. It certainly didn’t help that Dan Scavino, Trump’s campaign director for social media, tweeted a picture of himself next to the chalk, thanking Georgetown for supporting the “#TrumpTrain”.

It may be a bad omen that Trump’s social media manager apparently failed to notice that his candidate was being mocked. Still, he could hardly be blamed for missing the April Fool’s prank. In what is being referred to as the “#Chalkening”, students all across the country have drawn all over campuses. Students at U.C. Santa Barbara and University of Illinois found their campuses covered in the messages “Make America Great Again” and “Build a Wall”, mostly outside of the Latino student union. Emory University raised a national outcry when students discovered the word “Trump” chalked on every flat, reachable surface.

When Donald Trump first announced his campaign for president, I cracked jokes about it just like everyone else. I’ll admit, though, those jokes became a lot less funny when Republican after Republican dropped out of the race, now leaving only Cruz, Kasich and The Donald. Although some of the chalkings have been humorous, it certainly wasn’t funny when the graffiti at USCB and Illinois harassed Latino students.

Even so, at least in the cases of Georgetown and, more importantly, Emory, it’s important to realize when a joke is a joke. Unlike USCB, these case had no victims, targeted no students. At least the worst that can be said about our Hoyas is that the joke went over a couple people’s heads. That was not the case with Emory. After raising a national stink about the graffiti, students met with school officials and demanded they investigate the perpetrators of the graffiti. A student newspaper was quoted in the Daily Mail when they ran an editorial saying that they “do not take lightly the fears and pains of those students who felt victimized” by the chalk. Another student apparently told the Daily Beast, “I thought we were having a KKK rally on campus.”

But there is no indication at all that the Emory graffiti, which seems to have consisted entirely of the word “Trump” occasionally followed by “2k16”, was anything but a joke. Even if it wasn’t, and the chalkers truly support Donald Trump without the slightest hint of irony, so what? Does it offend people to be reminded that Trump is, in fact running for office, and that some people do support him? While the words of Donald Trump himself have been overwhelmingly offensive, does the harmless statement of a name warrant university investigation? For my part, I can’t even believe I typed the phrase “victimized by chalk” in the previous paragraph with a straight face.

If you firmly believe, as I do, that Donald Trump should not be president, then do the American thing and don’t vote for him. Take offense at the things that matter, yes. But chalk graffiti is, at most, a minor annoyance, and that no one will vote for a president just because they saw his name written on a wall. And if it truly bothers you? Chalk comes off with water.

You claiming these chalk drawings are occurring primarily around Latino student unions is complete and utter libtard bullshit…Making up garbage like this is what divides people, not Donald Trump…What a pathetic little snowflake you must be