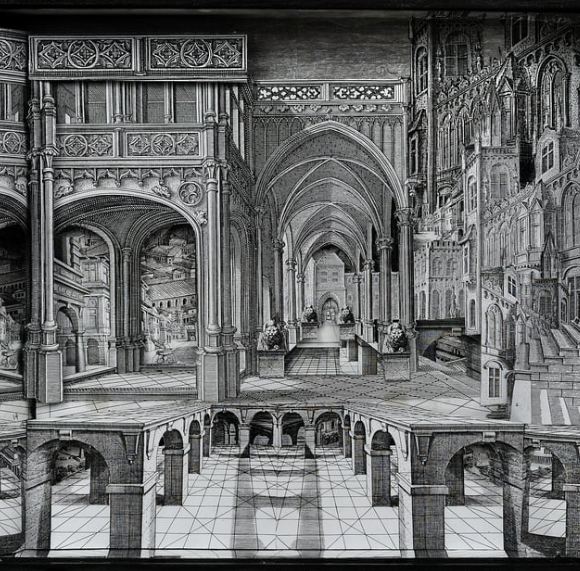 On October 7th, 2016, David Alfuth premiered his latest exhibit, Perspective, available at the Touchstone Gallery through the month of October. It features a combination of framed, three-dimensional, architecture-inspired works as well as elaborate pieces such as cabinet miniatures encompassed by an assortment of images that will enchant audiences with complicated detail and structure. Each image is entirely unique with specific details in the form of geometric patterns or distinct objects such as windows and pillars. Because each work uses a variety of different patterns placed against each other, there are several facets for the observer to study.

Alfuth is influenced by 15th century artists as well as books on perspective drawing. His travels around the world inspire him to draw from art and architecture from many different cultures. Alfuth’s work particularly reflects gothic and classical architecture through the use of unique collages made up of detailed architectural prints. One piece called “Architecture with Perspective No. 11” exemplifies these influences with its many columns, pointed arches, and sculptures of lions and archaic dragons busts. Nonetheless, Alfuth does include some pieces that are not as easy to categorize. Compared with the pieces that obviously look like the inside of a building, “Column Detail No. 2” identity is nearly impossible to discern. It shows columns flipped on their sides, large spiral shapes, and subtle vegetal patterns. Even though there is a variety of style choice among the pieces in Perspective, they are each similar in that they feature maze-like images are combined in such a way that catches the eyes of observers with an almost hypnotic effect.

Alfuth began his work on this project about two years ago. He was teaching for 8th grade and had just started to talk to his students about surrealism. Alfuth brought in a bunch of materials for his students to work with and encouraged them to use their imaginations and create stories. Alfuth found himself to be strongly influenced by this lesson. Once he started working with these materials in a school lesson plan, he could not stop.

As opposed to drawing, Alfuth uses a simple Xerox to copy selected images for his works, using a scalpel and glue to cut and paste them into a wide range of imaginative pieces. All of his images are black and white, allowing observers to focus their energy on the precise patterns that are the main focus of his work. Many of his works feature imagery of seemingly perpetual hallways, depictions of ancient statues, and a variety of different geometric patterns. Additionally, his art tackles the concepts of angle and perspective, in accordance with the name of the exhibit.

It is difficult to pinpoint just a few pieces from “Perspective” that stand out among a series of unique works. All the same, one particularly interesting piece is “Inside – Out – No. 2” which is constructed on base in the shape of a castle and wrapped in printed images. Although it is physically a small piece, the countless fine details and layering in the work make it truly intriguing in its inherent complication. An observer might take note that the images surrounding the castle feature a wide array of different patterns while the images inside the castle create the appearance of never-ending corridors. With regard to the dark black and white coloring and gothic style, there is an eery feeling that accompanies this work. That feeling is puzzling, if even morose, and it is noticeable in most of the exhibit. 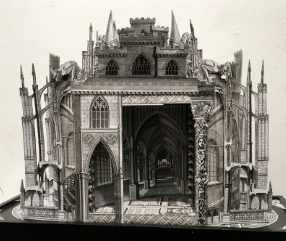 In all of Alfuth’s art featured in “Perspective,” the images are deliberately and creatively juxtaposed against each other. Even the the framed works seem to jump off of the walls. Alfuth’s exhibit features a collection of diverse art, from works that feature a more traditional angle of architecture, as opposed to a gothic style, like “Architecture with Perspective No. 11” to works that depict ceilings like “Ceiling with Perspective No. 5”. David Alfuth’s exhibit is both rare and striking. All of these works are tied together in this dark, complicated tone applied across a broad range of styles. It reflects a deeper morosity in works that seem to stretch on indefinitely. 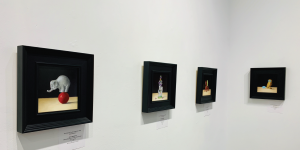 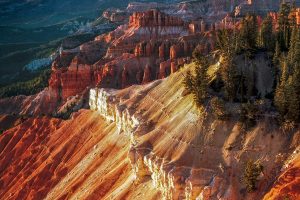 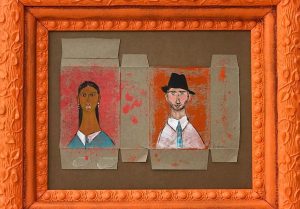 Colorful Worlds and Colorful Faces at the Touchstone Gallery