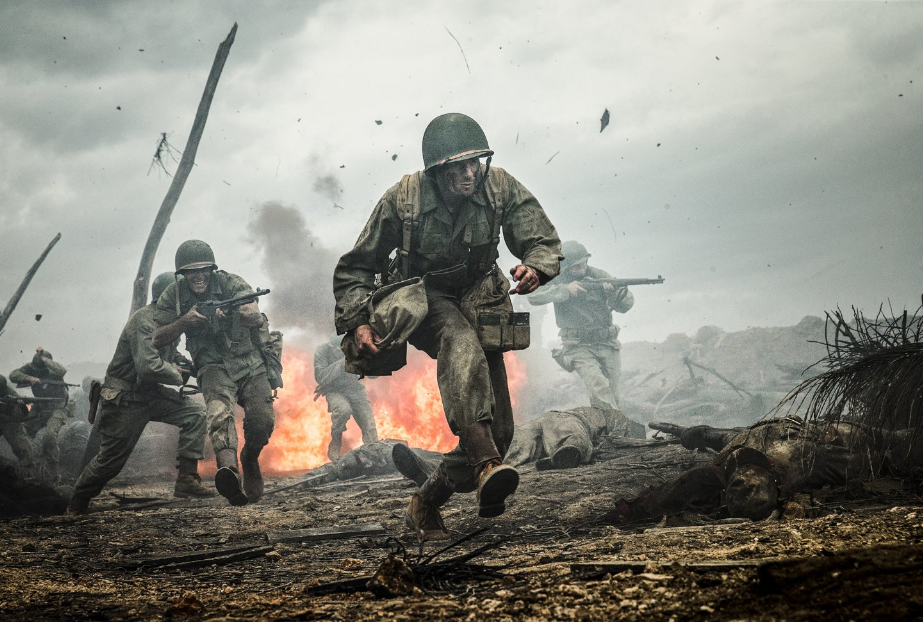 Hacksaw Ridge, directed by Mel Gibson, tells the story of Congressional Medal of Honor recipient Private Desmond Doss (Andrew Garfield). Doss, a conscientious objector to violence, heroically saves the lives of 75 wounded men at the Battle of Okinawa.The film comes after Gibson’s ten year directing hiatus, and he proves with this moving and at times grotesque picture that he’s still a talented director. His signature violence, rich subject matter, and essence-capturing cinematography are present in full force in Hacksaw Ridge. Hacksaw uses specifically crafted shots and symbolism to tell its message against judging others for their beliefs. The film is moving, inspiring and filled with complex characters played by actors who manage to capture their essence without unrealistic exaggeration.

Doss wants to serve his country, but without touching a gun. His patriotism conflicts with his religious pacifism, but he still ultimately joins the armed services as a medic. The first half of the film centers on his childhood and young adult life, wrought with the hardships of an unhealthy home. When Doss decides to join the army against the wishes of his family, he swears to follow his faith by not killing. He heads off to basic training with a bible and a picture of his new fiance, Dorothy (Theresa Palmer), tucked into his pockets. Once there, the innocent Doss becomes an outsider from his fellow comrades who think that his promise is one of cowardice. He’s tortured emotionally and physically for his conviction, and he becomes angry at his situation and questioning of his faith. Doss has to make a choice: conform or continue to be harassed. After a long fight, Doss is allowed to go to the front lines without a gun to join in the Battle of Okinawa.

Hacksaw’s first and second half are wholly different in both tone and content. Once Doss reaches the front lines, the tone shifts from light to pitch dark. He transitions from an innocent, young, southern Christian to a complex and scared, yet brave character. The frontlines scenes are packed with symbolism relating to Doss’s religious beliefs and the horror of war. Volumes of grotesque, wounded bodies are used throughout the lengthy battle sequences to symbolize Doss’s inner struggle with his conviction.This is where Gibson really impresses, using graphic images to make the war sequences as realistic as possible to put audiences on the same emotional level as Doss. Garfield shines in the later acts of the film as he has to show his character’s shift from conviction to action driven.

The cinematography enhances the content of the scenes in part through creative camera positioning. In Hacksaw, Cinematographer Simon Duggan (The Great Gatsby; I, Robot) and Gibson use overhead shots to suggest a divine point of view and service the film’s message of limitless faith. In this vein, during a scene in which Doss refreshes after his night of rescues, the camera is slightly lower than eye-level to symbolize his triumph. There’s also a particularly affecting shot in which a truckload of bodies passes by, revealing a group of men, including Doss, who have been sent to replace them. Dynamic shots like this prove the large amount of thought that was put into the construction of the film.

Though Hacksaw is successful, it’s not flawless. During the final battle scenes, Gibson included a two-shot sequence which shows a Japanese surrender ceremony. It breaks up the length of the battle, but it feels deliberate, like the result of an underdeveloped side story. Gibson rightly saw the need for a break from the battle, but the solution detracted from the focus of the film. Additionally, the roadmap-esque first half does not match the impressive nature of the film’s second and longest act. Each scene has a specific agenda, and the result is a mechanical feeling of build up. It also doesn’t include enough focus on Doss’s faith, on which the complexity of the latter half is based. It has a different tone entirely, which is fine except that it feels in each scene as if the film is holding its breath for the later action scenes.

Despite its flawed beginning, Hacksaw stands strong. The poignant battle sequences in the later scenes are packed with short, emotional moments between Doss and numerous wounded men which create a heavy, hopeful mood. Gibson and Garfield did justice to Private Doss’s history of heroism, faith, and perseverance while illuminating a little known event within a well known battle. There’s a poignant line in the film, “In peace sons bury their fathers, in war fathers bury their sons.” This line is illustrated in Hacksaw challenges of the spirit and the notion fatherhood and brotherhood in battle.