The Hoyas began the day lethargically. Opposed by a St. Francis team that played like it had nothing to lose, the Hoyas were on the defensive within the first five minutes. Sophomore goalkeeper Arielle Schechtman had to come out with her fists for an early cross, but the eventual shot that the Red Flash managed was a 20-yard pea-roller that Schechtman collected easily. This was Schechtman’s only recorded save of the match, and St. Francis only had one other shot.

Georgetown started to assert its dominance in the game largely because of its three center midfielders. Corboz and fellow juniors Taylor Pak and Chloe Knott seemed to be everywhere, bolstering the Hoyas’ offense and limiting opportunities from St. Francis. The entry of graduate student forward Crystal Thomas added an extra burst of pace to the Hoyas’ attack as the team peppered St. Francis’ sophomore goalkeeper Julia Hernan’s goal.

In the 30th minute, Corboz, who had already tested the St. Francis back line with several through balls, found Damaska in stride. After letting the ball bounce once, Damaska slotted past Hernan to put the Hoyas up 1-0.

“They were staying close to our forwards, so when defenders do that it’s easier to slip balls through to our forwards running onto it, and our forwards did a good job of making runs so it was easy just to play those balls to them,” Corboz said.

At the end of the half, Thomas wreaked more havoc down the left hand side, crossing for Knott who dragged her shot wide in the 44th minute. The next minute, Thomas again played a dangerous cross, this time beyond Hernan, into freshman midfielder Carson Nizialek. Nizialek couldn’t keep her shot down and skewed her shot over the bar from three yards out with the goal gaping.

The Hoyas only strengthened their iron fist on the match in the second half.

In the 52nd minute, Paul beat Hernan to a Corboz corner kick, and the referee decided that the contact between the two was part of a normal fifty-fifty challenge. The Hoyas led 2-0.

This was just one of the 19 corners the Hoyas had on the day, most of which were served into the six yard box by Corboz, but the players in the box couldn’t quite seem to get on the end of them.

“With corners it’s about delivery and it’s about desire to get on the end of it, and I think Rachel (Corboz)’s delivery has been good. I’m surprised we haven’t scored more,” said Nolan.

Thomas saw a cross deflected by a Red Flash defender onto the crossbar in the 71st minute before Damaska saw her curling effort in the 86th minute stay out off the bottom of the crossbar. Despite the 2-0 scoreline, Georgetown was never troubled in a thoroughly comprehensive victory. In all, the Hoyas amassed 24 shots (10 on target), forcing Hernan into eight saves.

“Give their kids credit. They battled and they made it difficult for us. they got numbers behind the ball, and they always seemed to have someone in the way,” Nolan said. “I’m always happy with performances more so than results. If we’d have won 10-0 today and played awful, I wouldn’t have been happy; I actually thought we played really well.” 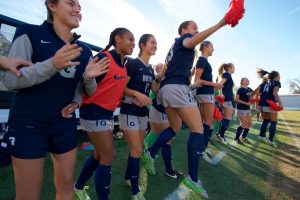 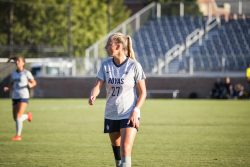