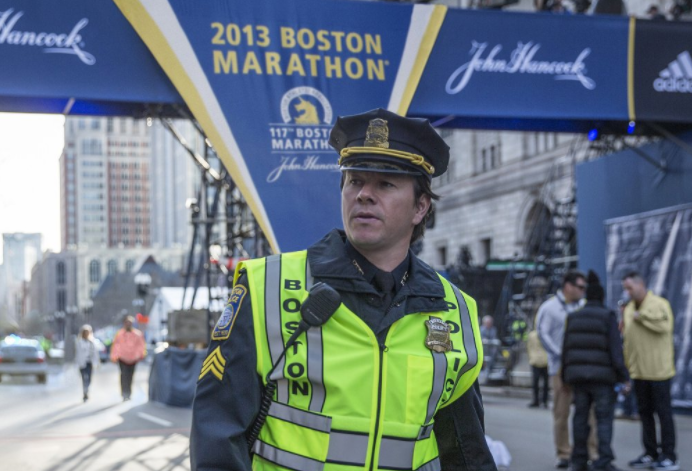 Director Peter Berg’s Patriots Day covers every aspect of the 2013 attack. It shows the before, during and after and follows the survivors, the police and FBI, the bombers, and the victims along the way. The result is a comprehensive picture, one which stays true to the facts and is only “cinematic” by means of making the film feel more real through various creative a refreshing techniques. The value of Patriots Day is multi-layered; it properly immortalizes the Boston Marathon bombing, shows the process of dealing with an act of terrorism, and illuminates the lives of the attackers without forgiving them.

The main focus of Patriots Day is the multi-day investigation that followed the bombing. The film follows Tommy Saunders (Mark Wahlberg), a Boston police officer who worked at the marathon and on the investigation that followed.  Saunders is on patrol at the finish line when the bombs go off and is involved in the most important investigative events in the following days.Tommy is the audience’s access into the process of dealing with terror attacks, a process led by a refreshingly non-dictatorial group of FBI agents. Boston PD is headed by Commissioner Ed Davis (John Goodman). The FBI work to find the bombers, helped along the way by various civilians whose characters illuminate the vital role that Bostonians played in the eventual captures. There’s a storyline for the bombers as well, Tamerlan (Themo Melikidze) and Dzhokhar Tsarnaev (Alex Wolff). There’s absolutely no salvation for either of the bombers in the film, but they are portrayed as having a brotherly relationship, albeit one in which Tamerlan is violently controlling, which makes their actions that much more difficult to fathom. There’s a bit of sympathy for Dzhokhar, who is only 19 and under his brother’s thumb, but both of them are acting of their free, violent wills.

Berg uses real cell phone and security camera footage, which reveal the effort that went into making the film true to the real events. The videos are cut in with scenes of the bombers and explosions, and additionally, real photographs are used during scenes of the investigation. The footage feels completely different from how one may have experienced seeing it on TV, since within the context of the film it is a part of a larger narrative and shows off exactly how many details were cut out by the media. The use of real footage and photos is becoming characteristic of Berg’s films. He started integrating real footage into the movie with his film preceding Patriots Day, Deepwater Horizon. The use of real footage and photographs forces the filmmakers to make the film look as similar as possible to the real events. The fewer obvious dissimilarities, the more real the film feels.

Sound is another strong point of this film, disregarding a few bad attempts at Boston accents. Berg cuts out sounds at different points, once when the city is shut down to hunt for the bombers. When he uses this technique, it fits with and enhances the narrative. The music is also done tastefully; there’s a refreshing lack of mood music that’s usually used in tragedy films like Patriots Day. A later storyline follows Dun Meng (Jimmy O. Yang) who was kidnapped by the bombers in their attempt to get to and attack New York City. In one scene, tense music builds to an uncomfortable volume, which signals the pivotal moment. The music in the scene isn’t present to help along lazy writing or plot moments, but rather to create tension using only images and sound. The result is an extremely tense scene that helps to keep the pace of the film brisk during its midpoint.

Cinematic elements of Patriots’ Day recreate the bombing. There are long scenes shot using a handheld camera and minimal cuts that transport the viewer to ground zero with Tommy. A popular film technique to convey chaos is rapid cuts that barely give enough time for the audience to see a blur, let alone focus on the subjects within the frame. Patriots Day doesn’t rely on this overused method, but in true cinematic form places its focus instead on what is included in the frame. It is during these shots that the most graphic results of the bombs are shown. The blood, and in one shot, a severed leg, is not the subject of the shot, rather an element of it. The viewer isn’t instructed what to look at by shots of just the gore, but rather sees frames the way Tommy does, with different elements: a hurt person, smoke, blood, other people, and debris. This way, the viewer gets to independently notice different things in the frame, which makes for a more sophisticated, and enjoyable, viewing experience.

The only real weak element of this film is the accents. The attempts at sounding Bostonian by Goodman and Michelle Monaghan, who plays Carol, Tommy’s wife, are bad at best and distracting at worst, but luckily neither of them speaks much. Wahlberg, a native Bostonian, has an accent authentic enough for both of them.

Patriots Day doesn’t have a deeper, political message to shout. The goal of the film is to respectfully and accurately immortalize a terrible experience which brought out the best of Boston. It tells the stories of the survivors, victims, and police who were affected by the bombing, and therein provides a comprehensive understanding of the event. It’s not an entirely sad film; Berg lightens it by including one liners at precisely timed moments. They’re not distasteful but instead fit with the characters who deliver them and make the film more realistic, since even in tragedy someone is bound to crack a smile sooner or later. Patriots Day is tasteful, smart, and important; it’s an example for later films about real tragedies to follow.