Split: Back to Form

By Luis Borrero and Brynne Long

M. Night Shyamalan’s movies are known for their twists. Looking at his résumé, it is not hard to see why audiences have come to expect that final, shocking revelation that changes everything, for better or for worse. In Split, Shyamalan surprises by crafting a convoluted, yet intriguing story from beginning to end. He wastes little time introducing the characters, which works to his advantage as he is able to spend the rest of the film slowly unspooling the intricacies of the plot. He is in total control of the material and the plot flows smoothly from scene to scene, from horrific moments of tension to comedic moments of relief. Impeccably shot, some of the most hair-raising sequences are constructed with deft editing accompanied by haunting strings in the background that creep into your skin. Perhaps the twist this time is that Shyamalan has finally created a compelling psychological drama with thrills along the way.

The scariest scenes in Split are entirely reliant on James McAvoy’s performance as Kevin, a man with multiple personality disorder. The scenes which most allow McAvoy to shine are the ones during which Kevin speaks with his therapist, Dr. Fletcher (Betty Buckley). For these, Shyamalan put McAvoy in high light in front of an eye level camera to draw focus to his face. McAvoy’s facial expressions during the dialogue-heavy scenes reveal Kevin’s inner conflict, despite the lies and false assurances he tells Dr. Fletcher. Tiny facial adjustments including eye movement and twitches, as well as expertly timed expressions all make the nine personalities he plays in the film feel entirely different from one another. The voices of the various personalities change, as does their clothing, but McAvoy’s face is the powerhouse of the performance- he would have been able to play this role with his hands behind his back wearing the same outfit for each character.

Betty Buckley and Anya Taylor-Joy, fresh off the indie horror hit The Witch (2015), give solid performances as well. Buckley portrays a character who, if played by a bad actress, would have made the film entirely unrealistic. Dr. Fletcher believes in her ability to help Kevin without resorting to institutionalization, and that goal makes many of her choices seem irresponsible and naive. Buckley does the script justice, however, and performs in a way that make Dr. Fletcher’s choices land successfully as flaws of the character, rather than flaws in the writing.  Unfortunately, some of supporting cast is not as impressive. Haley Lu Richardson portrayal of one of Kevin’s victims, Claire, was entirely unconvincing, and the same can be said of Jessica Sula, who plays Marcia, another victim. Perhaps some of the cornier dialogue is to blame on a few occasions, but nevertheless their performances are embarrassingly unrealistic; they seem more annoyed than scared of their situation.

There are three main character arcs in the movie: Kevin, Casey and Dr. Fletcher. Three’s a crowd, at time making the narrative feel overstuffed. Of the three, Kevin´s arc is the most complete as, by the end, the viewer is able to understand his trauma and what drove him to what is essentially madness. While several of his final scenes become increasingly hard to believe, there is a nuanced combination of both pathos and dark humor lurking around, making these moments ultimately enticing to watch. Regarding Casey, after the girls are kidnapped she starts having flashbacks about her childhood that illuminate her reserved nature. These short episodes, scattered throughout, give a necessary background to Taylor-Joy’s character, who responds to her kidnapping in a more collected way than Claire and Marcia, who run into trouble for attempting to escape. Yet after a heavy handed climax in the flashbacks, that storyline is left hanging, and there is little payoff to Casey’s character arc. It may be poetic, but at the same time quite frustrating. Likewise, Dr. Fletcher, warmly interpreted by Buckley, uses her scenes to make the audience question their beliefs regarding the way mental illness is viewed, albeit to uncertain results. Her character brings some thought-provoking points to the table, however they are largely (and rather sadly) refuted by the final moments of the film. Her personal arc is lacking and does not amount to anything meaningful.

Split is shot by cinematographer Mike Gioulakis, whose recent work includes the horror film It Follows (2014). Not many shots in this film stay completely still; many include slight zooms that occur nearly unnoticeably, creating an unsettling effect. There are also a few well-placed God’s-eye view shots that hint at the coming of “the Beast,” a mysterious figure who has a God-like authority over Kevin’s personalities. At the film’s midpoint, Kevin walks down a spiral staircase following a difficult session with Dr. Fletcher. For this, the camera  faces upwards through the middle of the stairs, a position which symbolizes Kevin’s downward spiral as the Beast nears. There are many other interesting camera effects and placements; it’s refreshing to see some carefully considered technicalities in a Shyamalan film.

The ending, despite some annoying aspects, was suspenseful. Throughout the film, Casey interacts with Kevin in a way that is similar to Dr. Fletcher’s interactions with him, but she has a different motive. Dr. Fletcher thinks that she can help Kevin by engaging with his different personalities, whereas Casey plays into Kevin’s illness to try for a chance of escape. At the end, however, for the sake of suspense, Casey’s character unrealistically changes. By all accounts, her interactions with Kevin’s personalities up to a pivotal end scene were for survival, not because she actually trusted his personalities. For suspence’s sake, when it counts most, she risks her own life to interact with the original Kevin, an act which strikes as highly unlikely and unfitting to her otherwise resourceful character. The result is suspense and a disturbing dialogue, but the cost is realism, and it feels like lazy writing.

Despite the ending’s partial reliance on unrealistic character decisions, Split is a good film and a fun watch. Many have claimed that M. Night Shyamalan is finally back with Split, considering his misfires in recent years. It certainly is one of his better films, and some may think it up to par with The Sixth Sense and Signs. Split raises ideas about the way the mentally ill are treated, what it’s like to be trapped, and the significance of human suffering, all while looking, feeling, and sounding amazing. Whether Shyamalan is back or not is for you to decide, yet not being impressed by the skill and competence displayed on screen would certainly be a misjudgement. 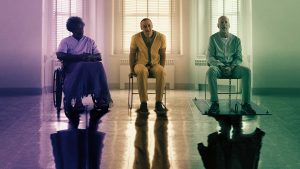 Trailer Takes: The Christmas Chronicles, Glass, and The Best of Enemies