I’m three or four years old, holding up a popsicle stick cross I made in day care for my mom to see. I had colored it using pink washable marker and draped fake ivy around the arms. She smiles and puts it in a craft supply box. Over the years, it’ll be shuffled deeper and deeper into our basement.

Stepping into a church for the first time, I look around. It’s beautiful in a foreign, exotic way. The stained glass angels stare at me, telling me with their judging eyes something I already know: I don’t belong here. But I follow my teacher down the aisle, up the three short steps, onto a wooden stage where a gorgeous grand piano beckons to me, its lid invitingly open. I sit and warm up as my teacher sets up the recording equipment. He presses the red circle and the angels fade as I start to play, my music filling the space.

We’re sitting at the dining room table. I’m sipping my water, wondering if we’re allowed to start eating, when everyone suddenly holds hands. My best friend turns to look at me, cocked eyebrow but soft expression, and I hold out my hands to complete the circle. As her father says grace, I start to panic. Do I say “Amen” with them? I’d feel like an imposter, but I don’t know if it’s impolite to abstain. I end up mumbling something incoherent and keep my head bowed for a beat longer, not wanting to see if anyone noticed. Once we start eating, though, it doesn’t take long before the entire table is talking and laughing again, and I forget about my anxiety.

“Did something happen to you?” It’s out of my mouth before I can stop it, but it’s the only thing that makes sense to me in that moment. I’m lying on my parents’ bed with the phone next to me, speakerphone on, as I listen to my brother tell me about his conversion, or, as he calls it, “acceptance of Christ.” I can’t help but imagine a sort of “Jesus take the wheel” moment, but he tells me nothing happened. Honestly, I shouldn’t be so surprised; he’d been helping at a friend’s church for years, and it really was only a matter of time. Later, my mom tells me he’s hardly the only one—apparently grandma likes to listen to Christian radio in the sanctuary of her Shanghai home. Mom’s tone then was laced with the slightest derision, but reflecting over the past three years, I can’t quite remember the last time I heard it there.

It’s the first week of class and I read the syllabus to see the first reading: Encyclical on Climate Change and Inequality. I’m at a Catholic university now. Sitting at lunch with some newly made friends, I’m skipped over as they discuss their understandings of faith. Days later, I’m at my computer answering that same question for Problem of God. The words come easily.

I found that old popsicle stick cross over winter break. It was sitting in the same craft supply box my mother had put it in. The pink faded but the ivy is pristine, safe from the cobwebs that decorate the rest of the cupboard. I turned it over to discover my name on the backside, bookended by two small hearts. As I sit here writing this now, I think back to all the times I’d been reminded of the depth of American religiosity, and I reflect on how my journey, just like those of thousands of other children, started with a simple craft project. I may not believe in God, but I believe in people and the incredible capacity they hold.

Kaei is a sophomore in the SFS. 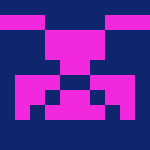 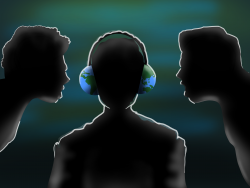