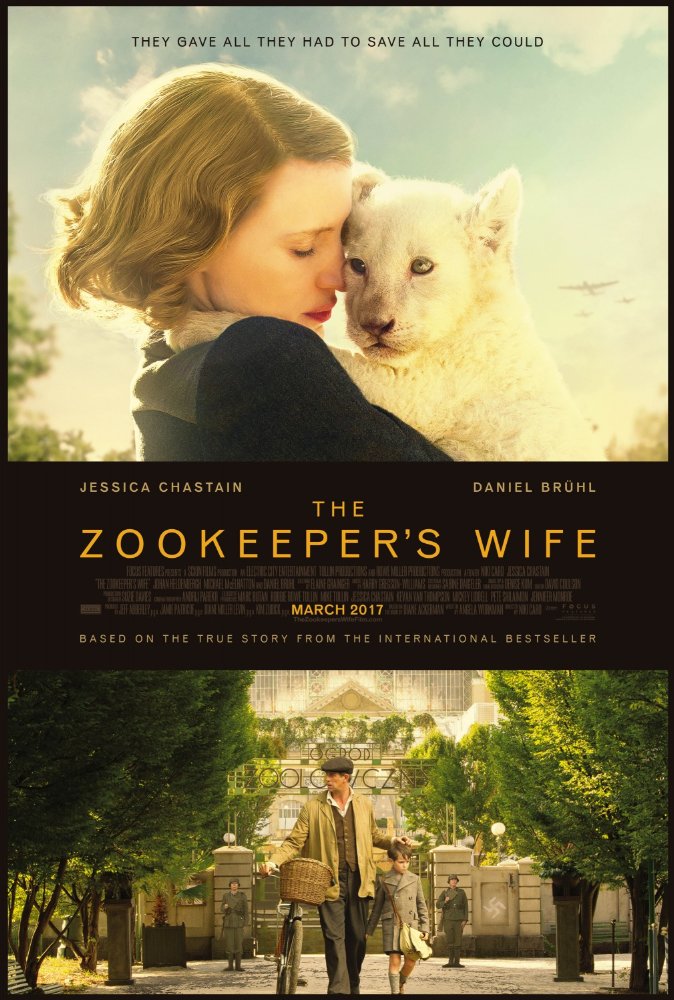 Holocaust movies are often tough to watch, be it for the imminent death scenes lurking around the corner or the constant violent, even exploitative, displays of injustice, torture, and overall inhumanity. That said, The Zookeeper’s Wife is the untold story of Antonina Zabinski, a Polish woman whom with her husband, Jan, and young son, Ryszard, decides to shelter Jews in the facilities of their vacant zoo during the Nazi occupation of Warsaw. Though brutal at times, the film subtly presents a hopeful image of a dire situation.

The movie is handsomely told through bleak, grayish tones, with suitably understated period costumes and minimalist production design. It is small in scope, but grand in its message. The initial scenes set the stage with grace and sweetness, presenting the everyday life of this rather unusual family. However, all hell breaks loose once the bombardments start and tanks gradually fill the streets of the city. Niki Caro’s competent direction in these scenes makes for a series of intense sequences, accompanied with some grisly images of the animals’ deaths as violins mournfully harp in the background. All this effectively establishes the gloomy tone for the rest of the film.

Soon after, Antonina and Jan start carrying out their secret scheme, trying to keep Nazi zoologist Lutz Heck, who has a special interest in Antonina, and the German troops at bay. The scenes that follow have a familiar air, from the almost-getting-caught moments to the rising tensions between husband and wife due to an unwanted intruder to the final confrontation. By the end, everything falls into place and the audience cannot help but grin while reading the epilogue. The villain has been defeated and the main heroes have survived.

The standout is without a doubt Jessica Chastain, sporting a refined Polish accent and an expressive face that brings much heart to an otherwise grim movie. When she smiles, we smile; when she cries, we cry. Her voice cracks at just the right places while her tears of despair take center stage in emotional moments; her agonizing screams fill the room during the tense final sequences. Chastain’s paused and layered line-delivery in one particularly powerful scene, as she comforts a child holding a rabbit, is so good you cannot help but feel that this tour-de-force should belong to another movie that is on par with such talent.

The supporting cast does an adequate, though largely unremarkable, job playing the people that fill Antonina’s daily life during these hard times. Johan Heldenbergh brings earnestness and pathos to her role as Jan, a character that feels regrettably underwritten. Tim Radford is fittingly innocent as the young Ryszard, while Val Maloku gives an unsatisfying performance as the older version of the character. His performance lacks urgency, despite some fine emotional work towards the end. By far the best performance of the supporting cast belongs to Shira Haas who plays Ursula, one of the Jews that’s being sheltered. Her story is a tragic one; her haunting introduction to the film will certainly leave many speechless. She imbues her role with complexity and emotion, presenting a full-rounded human being who is fighting for survival in the midst of adversity.

Sadly, the biggest disappointment is Daniel Brühl’s turn as Lutz Heck, which brings about one of the major flaws of the film. Instead of trying to play on the ambiguity surrounding the character and his complex relationship with Antonina, the film insists on making him the central antagonist. Brühl has more than proven his worth by now, especially in Rush and Inglorious Basterds, but the problem remains on his recent character choices. In The Zookeeper’s Wife, he once again takes on the part of the ‘villain,’ even though technically his character is not a vile person. His role is supposed to echo that of the evil Nazi officer, but Lutz does not even explicitly represent the ideals of the Third Reich. He is merely a man of science with some foolish ideas, among them recreating already extinct species, taking advantage of both his position of power and personal acquaintance with the Zabinskis. Similarly, his fixation on Antonina comes off as naïve and misguided rather than creepy, for which his actions towards the end, though certainly extreme, evidently come out of anger for her breaking his trust rather than actual evilness. Overall, their entire relationship is undercooked, making their entire storyline feel amateur and melodramatic. One could say that Lutz is employed as a tangible symbol for the actual villain of the film, i.e. Nazi Germany, but his characterization and actions do not fit the stereotype, making his entire arc feel underwhelming.

Furthermore, the film also suffers from weird pacing and editing at times, especially as it nears the final act. There is a tagged-along subplot regarding Antonina’s pregnancy and a rushed sequence regarding the Warsaw Ghetto uprising. They are fine inclusions, though not overly necessary. To its benefit, the film does not linger on these episodes for long, but they would have certainly worked better had they been given a proper and more elegant build-up.

The Zookeeper’s Wife is not a thematically complex nor profound film. There are some nice subtleties scattered throughout, like the parallel between the Zabinskis’ owning a zoo to take care for their beloved animals and the Nazi perception of the Jews as animals. However, for the most part it remains straightforward and simplistic in its approach. Some may be disappointed by its lack of depth, but the movie remains engaging and heartwarming throughout. This is direct, unambiguous storytelling, and a welcomed addition to the Holocaust films repertoire.