Developing An Argument is an Ambitious, Disjointed Realization 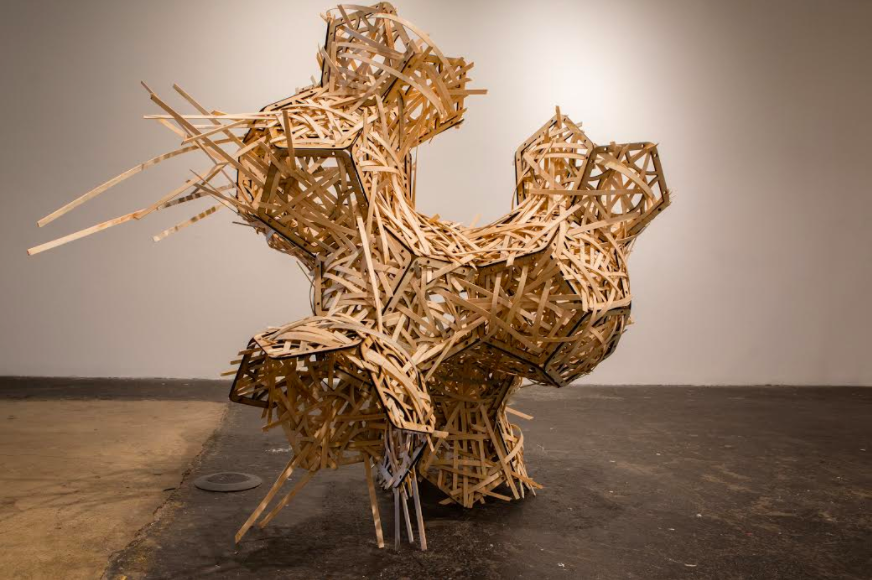 Christian Benefiel makes art that’s not meant to last. Not only does he use the natural supportive structure of his sculptures to keep them together, foregoing glue, nails, or any other  binding material, but he also deconstructs his sculptures once their exhibition life is up. In his show at the Flashpoint Gallery entitled Developing An Argument, he incorporates this momentary nature into the theme of debate, showcasing point and counterpoint in covertly meticulous woodwork.

Benefiel’s main idea is the contrast between balance and tension, a central concept within argumentation. His three sculptures on display at Flashpoint exemplify this contrast, with each piece balancing on and against itself. The first piece, titled “On the Outside, Looking in, To a hole,” is large, wooden, and wheel-shaped, with shards jutting out in all angles, but which holds a solid and sure form. The hole in the center of the piece is like a hole in an argument; the piece is not a strong debate, but instead a circular argument.

The piece is definitely more conceptual than intricate. It doesn’t feel as if there is any sort of purpose to where the shards of wood are going or where they are placed except to find balance in the piece itself. Yes, this is artistic and meaningful within itself, but it does leave more to be desired from the sculpture.

The last piece in the gallery, “A way through or around” is a long tube-like object with wooden shards jutting out of all sides, similar to the first sculpture. However, this one is different in that it is the only piece that includes color. By creating an ombre effect with blue and pink hues, the artist said he is showing gradation and movement rather than representing a larger metaphor. This work is definitely his strongest, with its subtle curvature contrasted by the chaos of the wooden shards. The sculpture feels both tough and fragile since it is only connected to itself, alluding to more than its physical form in the way it emphasizes the constructive process of sculpting.

“I look at my work as being in a frozen state of collapse; it’s not to be preserved,” Benefiel said at an artists talk on March 26. “It’s a very egotistical thing to say ‘this art is meant to outlast me.’”

The construction and concept of his work is tremendous. There is an intense intricacy to what Benefiel does, and his background in metallurgy and woodworking shows through his impeccable designs. Though his sculptures are abstract, there is a definitive meaning and assemblance to it all. Furthermore, using the theme of argumentation to inspire physical entities is especially encapsulating. Benefiel’s sculptures force the viewer to think about their own style of debate, and whether or not their ideas flow or sharply emerge, mirrored in the structure of the pieces.

However, Benefiel denied that his exhibit at the Flashpoint is a collection. He explained that there is more to the theme than just those three pieces, explaining the feeling that something is lacking from the works on display. While they are individually thought-provoking, they are not as cohesive as one would hope. And while the wheel and the tube-shaped works have a definite connection, the middle piece, a grounded sculpture that lacks the same striking, jutting angles of the other two, feels amiss along the much larger eye-level pieces.

Developing An Argument is definitely a masterwork in meaning. The simultaneously obvious and unconscious message of debate is incredibly thought-provoking, ambitious, and deliberate. Though it lacks in cohesion, the pieces mean more individually than they would as a group. Overall, Benefiel proves himself to be a powerful force in the DMV art scene and a strong addition to the Flashpoint.