For when you just want to stay in bed, removed from the world, here’s a group of soft and sweet covers, and (mostly) equally pleasant originals.

Frank Ocean’s “Thinkin Bout You” is arguably the best genre-spanning song to ever be released. It’s sad and slow and full of emotion and brutally honest and most of all, beautiful. It’s hard to cover because Ocean’s voice is so powerful, so while Typhoon’s version isn’t nearly as good as the original, it’s a good take and puts in a more indie-tech space, whereas Ocean’s is part-R&B, part jazz, part something formerly unbeknownst to music.

The magical lyrics of “Gypsy” make it so that you could change any aspect of the underlying song (vocals, beats, etc.) and it would still be magical. So in Tigers Jaw’s cover, the electric guitar in place of the steel guitar and harp (at least I think it’s a harp) pair well with lead vocalist Ben Walsh’s angsty, raspy, yelling vocals. It’s at first off-putting because his voice sounds out of place in such a smooth song, but when paired with his counterpart Brianna Collins’ sweet voice, it’s unbelievably adorable, and still magical.

In honor of HAIM coming out with their newest album, here’s this gem. And yes I know I put this on a previous playlist, but can you blame me for loving either version of this song? HAIM slows down an already brutally slow song, and in this painful speed comes absolute perfection. Their soft, silvery voices float through the background beats to accomplish a powerful song of apology.

4. “How Deep Is Your Love”: Bee Gees/the bird and the bee

This 70s classic can be a little ridiculous to listen to because, well, it’s the Bee Gees. But the bird and the bee soften the song with flowy female vocals and a chime in the instrumentals. It’s a quintessential love song and is arguably better than the original, but I’m sure oldies fanatics are rolling in their graves as I give the bird and the bee such high praise.

Okay so nothing can top The Beach Boys’ original version of “God Only Knows” because it’s amazing and the harmonies are so tender and, I mean, it’s The Beach Boys. But JR JR gives it a stripped, minimalist take that turns the song into something more modern while maintaining its initial perfection. 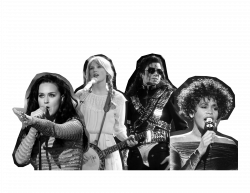 Twelve Glee songs that are better than the original (and counting)

Critical Voices: The Pains of Being Pure At Heart, Days of Abandon