Carrying On: Sexism in the City

You are most likely to encounter the New York City bitch during rush hour. Lifted chin, overall polished and professional appearance, determined gaze, assertive posture, eyes staring straight forward. This bitch will shove you out of the way for a place in a packed subway car. This bitch is used to having to assert herself at every possible opportunity because this bitch knows she has to fight for every inch of space. This bitch is familiar with wandering hands on subway cars, with humiliation, with violation. This bitch has developed a hardened exterior. This bitch is intimidating. And yes, this bitch is always a woman.

Last summer, I commuted with my mom, who has carefully cultivated an unshakeable image and demeanor over more than 20 years traveling from Long Island to the financial district using public transportation. While commuting alone, I learned to see why she acted this way: it doesn’t matter if we’re alone, with a group of friends, or with a significant other.

This summer, I rode the train every morning with a female friend my age and then walked to my office, a building across the street from the Empire State Building, alone. On the first-day, I was catcalled seven times during the 10 minute walk from Penn Station.

As I said, it was my first day. Feeling unsafe during my commute added one more thing to first-day nerves. Every woman I know can tell me multiple stories off the top of her head of harassment experienced while in the city. A young teenager is groped on the street while walking with a physically imposing male friend. A man tries to grab a girl’s breast while she walks with her mom. A woman’s purse is insistently poked by a man sitting on the subway as a nonverbal signal telling her she’s not allowed to take up space. A girl is bothered repeatedly for her Instagram username by a stranger sitting across from her on the subway. A young woman is followed for 10 blocks by a man into a Starbucks, where she cries and pretends to be on the phone dealing with a family emergency to get him to leave her alone. No one intervenes.

A middle aged man approaches me in my favorite crowded pizza restaurant near my office. He immediately begins asking me personal questions about where I live and work, insisting that we share food, telling me I look like a “nice French girl,” whatever that means. He steps too close for comfort and puts his hand on my bag. My hands begin to shake, my heart races, and my palms sweat. No one intervenes.

I, the outspoken feminist who wanted nothing more than to give him a piece of my mind, felt my tongue shrink back into my throat. I reverted to the ingrained defense mechanism of smiling and responding civilly, demurely, agreeing with whatever he said because there was no way of knowing what reaction a contrary response might produce. Thankfully, he let me leave without much protest. I was so frustrated with myself in that moment for not being able to speak up. I never went back to that restaurant because even thinking about going in made the feelings of stress and discomfort return.

“You can deliver my package any day,” says the Wall Street bro sitting across from me on the subway, a stunning display of wit in response to the fact that I was carrying a box. His eyes shift side to side, seeking the approval of the other young men in perfectly tailored suits and sunglasses sitting with him. An immature boy looking for a bit of amusement at the expense of a young woman’s comfort; cue the fist bumps and self-congratulatory laughter. A relatively mild and absurd experience, it was easy to brush off, but encounters like this are not always so mild or non-threatening.

There’s this sense among bystanders that because the harassment is taking place in a public space, intervention is unnecessary because there’s no way that men would commit actual violence with so many people around. But verbal harassment is a form of violence. Will the confrontation really end when the girl leaves the store? Don’t the targets of this harassment deserve assistance from people who are able to provide it?

As a young woman who had not yet developed the city bitch persona, I rode the subway this summer as women are expected to. We hold our bags as closely as possible to our bodies, wary of taking up more space than is absolutely necessary. We are hesitant to push forward when trying to enter or exit subway cars and meekly say “excuse me” while we worry we won’t make it off the crowded train before the doors close. That’s one of the main differences in the ways in which men and women are socialized: women are taught to take up as little space as possible, physically and verbally, while men are taught they are entitled to it.

That’s what this whole issue comes down to: a woman’s right to take up space. Women have the right to exist just as much as men do, which should be obvious, yet we are constantly told the opposite. Every time a man yells at us from across the street, he is telling us that the sidewalk doesn’t belong to us. Every time a man crowds us, insisting we reveal personal information in a busy restaurant, he is telling us that he owns the space in which we’re simply trying to exist. Every time we are groped or shoved on the subway, it communicates a message of shame and unworthiness.

By the end of the summer, I walked down city blocks confidently, headphones in place to drown out the noise, chin slightly elevated, a fledgling city bitch just learning to take flight. But I learned that projecting a hardened exterior doesn’t always work, that all women are subject to harassment regardless. Some days were more intense than others. Some days, I wasn’t bothered at all. But we should not have to feel grateful for the days we are not harassed, and we should not stop talking about the harassment we face. I will keep talking about this until women can commute to their jobs without fearing street harassment, until the city bitch exterior is no longer necessary, until women can claim their fair share of public space as their own. 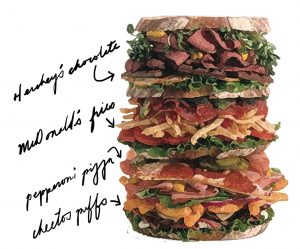 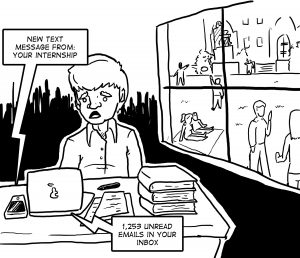