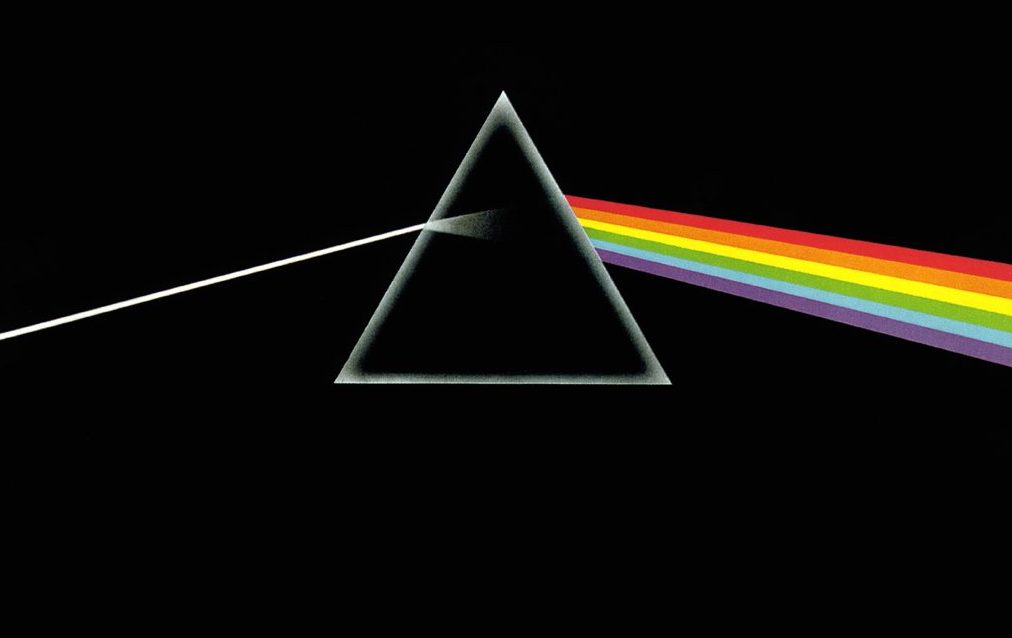 Take a look around Lauinger Library, or anywhere college students congregate. Amongst the myriad of laptop stickers and logos on t-shirts, you will see Storm Thorgerson’s drawing of a prism refracting a beam of white light into the whole spectrum of color. That drawing has adorned college dorm rooms everywhere since it first appeared on The Dark Side of the Moon in 1973.

Like its famous cover art, Pink Floyd is ubiquitous. Earlier this month, their debut album, Piper at the Gates of Dawn, celebrated its golden anniversary. Recorded by four London architecture students in 1967, it was the beginning of one of the most successful and best selling bands of all time, and the start of a musical journey that reached deep into space and then back into the confines of life on Earth.

The sound that songwriter and frontman Syd Barrett conceived matched the kaleidoscope portrait of the band on the cover of Piper. It was space rock, a way for the band to explore the cosmos of sound they could produce with their instruments, and a vehicle for Barrett’s sci-fi lyrics. The swirling and shrieking guitars of “Astronomy Domine” and the instrumental “Interstellar Overdrive,” showed where rhythm and blues could go once it left the United States and headed for outer space by way of the London underground music scene.

Unfortunately, Barrett’s own personal exploration with mind altering drugs and concurrently deteriorating mental condition led to his alienation from his band members, and eventual replacement in 1968. Drummer Nick Mason, keyboardist and vocalist Richard Wright, and bassist and singer Roger Waters added David Gilmour to the group, at first to fill in for Barrett’s guitar and vocals, and eventually to replace him.

Even with his departure from the band, Barrett never really left Pink Floyd. The band stayed on their cosmic trajectory on 1968’s A Saucerful of Secrets, made while Barrett was still associated with the group, expanding their sound to match the vast expanses of space that an alien ship might hurdle through. “Set Controls for the Heart of the Sun,” with only one repeated lyric, the title, became a vehicle for extended improvisation, often doubling in length during live performances.

With Waters as the driving creative force, the band orbited this sound until 1971, when they reached the end of their cosmic journey. The final song of that year’s Meddle opens like the ping of a distant satellite sending messages to Earth. “Echoes” lasts twenty three and a half minutes, and takes listeners to a distant planet where an ocean swells and alien seagulls cry over the sound of the waves. Unusual studio effects create guitar squeals and swirling organs, and lengthy instrumental interludes harken back to the band’s early days. Waters’ lyrics, however, are not about the planets spinning through space, but people spinning through life. It is a culmination of their space exploration, and the beginning of a new chapter in their work.

The Dark Side of the Moon (1973) was released less than two years later, when this new vision was fully formed. The band was firing on all cylinders, playing, singing, and producing their way to one of the greatest albums ever made. With lyrics more human and relatable than their space adventures, and music more accessible than their psychedelic experimentation, Dark Side examines facets of life that everyone experiences. “Time” and growing old, “Money” and greed, and “Brain Damage” and mental illness (a nod to the condition of Barrett) all speak to different people in different ways.

Pink Floyd had became the internationally recognizable band they are today, but they did not stop and bask in the glory for long. They put out 3 more critically acclaimed albums before the end of the decade.

Wish You Were Here (1975) is a tribute to Barrett: the title track is a song for a lost friend, and “Shine on You Crazy Diamond,” the 26 minute, 9 part suite that opens and closes the album, is about his fall from grace. Here is where the band begins expressing their distaste for the music industry that they were suddenly the darlings of. “Welcome to the Machine” and “Have a Cigar” show the band feeling pressure from executives and outside influences.

After another success with Animals (1977), the alienation of fame and pressure to be marketable led the band to create another masterpiece in 1979, a rock opera in the style of The Who’s Tommy from a decade earlier, The Wall. The band had returned all the way from outer space, and finally retreated into their own heads. The character in The Wall slowly builds up a facade as a defense against outside threats to his self esteem, until he realizes he has trapped himself in a prison of his own design, resulting in a mental breakdown and internal struggle in an attempt to break free.

Unfortunately, the work put into the album and the creative differences that arose during recording ultimately built walls between the band members themselves. At the height of their fame, Wright was fired, and Waters left a few years later. The albums that came after are not bad, but they fail to come close to the behemoths before them.

The Final Cut (1983) is a response to the Falklands War and practically a Waters solo album. It features “When the Tigers Broke Free,” one of the most emotional songs in the band’s catalogue, about the death of Waters’ father during World War II, but the rest of the album is rather melancholy. Following Waters’ departure in 1985, Gilmour took the reigns, and released the aptly named A Momentary Lapse of Reason (1987). While “Learning to Fly” and “On the Turning Away” receive plenty of radio air time, they are the lone standouts on a drab Gilmour solo record. Gilmour continued this trend with The Division Bell (1994) and the most recent, and final Pink Floyd album, The Endless River (2014).

The band played together one last time in 2005 for the Live 8 benefit concert in London, but the scars left behind by the band’s split still lingered, as the band, or rather Gilmour and Waters, have yet to make amends and reunite again. But a reunion would still be without Wright, who died in 2008, and Barrett, who passed two years earlier.

Despite the never ending march of time, Pink Floyd’s myth has only grown. They have sold 250 million records influenced countless bands. They bankrolled the production of Monty Python and the Holy Grail (1975) with the profits from Dark SIde. Storm Thorgerson’s album artwork is iconic and will be hung on walls by teenagers for many years to come. They will always be one of the bands your dad likes that is cool to like too, and will be for another 50 years, and more.

The Weekly List: Seven Unrelated Songs to Throw Together to Meet a Deadline

The weekly list: The lessons I learned from my parents’ music