After spending most of her time on tour for the last few years, Molly Rankin, frontwoman of indie band Alvvays, decided to escape to Toronto Island. There, she found inspiration to begin writing the band’s new album, Antisocialites. On the surface, it is a simple pop album about heartbreak. However, this is just a stage—what Rankin refers to in an interview with NME as her “fantasy breakup arc”—that masks darker meanings. True to its name, Antisocialites reflects on loneliness and relationships while artfully weaving in faint strands of existentialism.

The first two tracks ease the listener in with indie sounds similar to those of the band’s first album. The soft, beachy melodies lull the listener into a state of calm that nearly disguises the complexity of the lyrics.“In Undertow” oscillates between sarcastic lines and more sinister ones like “Meditate, play solitaire, take up self defense / When you get old and faded will you want your friends?” These lyrics begin to crack the faux setup of a breakup song. Likewise, amidst the telling of a trite love story in “Dream Tonite,” Alvvays seamlessly slips in the theme of the album: “Antisocialites watch a wilting flower.”

The core of the album takes a sharp diversion from the dreamy tones of the beginning with edgy guitar riffs and angsty choruses. The rebellious energy of the “Plimsoll Punks” amplifies saccharine lyrics in which the narrator compares her ex-lover to an ice cream sundae. The album gets more creative with “Your Type” and “Lollipop (Ode to Jim). “Lollipop (Ode to Jim)” appears to be a silly song about an electric love. Underneath the fun, upbeat rhythm, however, a voice repeatedly cooes “You’re alone in this picture / And it swallows me whole.” The line is so faint that it is hard to hear, but is striking once noticed.

It is not until the final track that the album feels like a cohesive piece and the narrator steps out from behind her mask. While other songs seek to hide sinister lyrics among seemingly lighthearted stories and catchy beats, “Forget About Life” is candid about existential anxiety. Rankin temporarily satisfies her angst by throwing in the towel and repeatedly asking “Do you want to forget about life / With me tonight?” The narrator solves the “antisocialite” dilemma by deciding to take a break from being alone in deep reflection and share in some ignorant bliss with another person. In the words of Rankin herself during an interview with Stereogum, “The record ends with living in the moment. Things may not be perfect, but here we are, regardless.”

While maintaining their classic indie pop sounds, Alvvays created a piece of art that surpasses their successful first album. Rather than writing a single story arc, Alvvays strings together a series of vignettes that share a single narrator. Although Antisocialites appears to be about dealing with a breakup, the themes run much deeper, mixing easygoing humor with profound thoughts about life and loneliness. Because it is intended to resemble a series of short stories, Antisocialites is compiled so that each track can stand firmly and beautifully on its own—but this cannot compare to the complicated and poetic narrative weaved by connecting them all together.

Voice’s Choices: “Dream Tonite” and “Saved by a Waif” 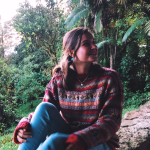 Critical Voices: Sia, This is Acting