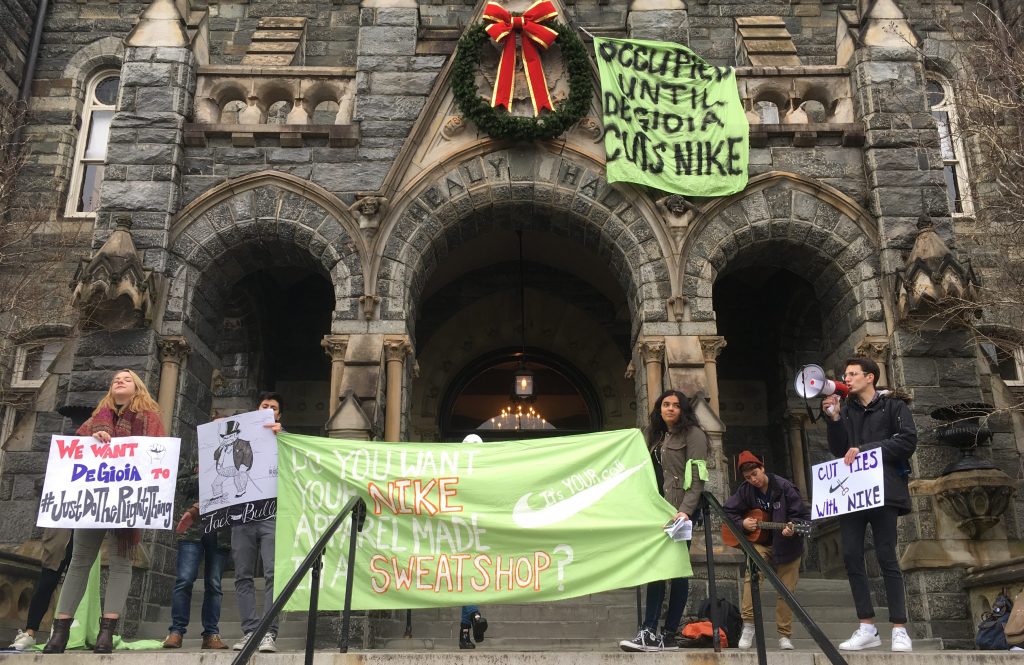 Two weeks ago, after years of negotiation, mediation, and student activism, Georgetown University signed a new licensing agreement with Nike, Inc, allowing the company to resume producing Georgetown apparel. Nike has faced scrutiny from the student body and from activist groups over its labor practices. The new contract now establishes a protocol between the company and the Worker Rights Consortium (WRC), a labor rights monitoring group for colleges and universities. The WRC will be ensured independent Nike factory access and remediation measures to monitor labor conditions where collegiate apparel from their 190 affiliate universities, including Georgetown, is produced.

The administration verbally agreed last December, in response to a student sit-in of nearly 35 hours, to let their licensing contract with Nike expire on Dec 31 and to not re-sign with the company until they ensured independent monitoring access for the WRC.

Over the course of 2016, some students became increasingly concerned with workers rights abuses and labor conditions in Nike’s supplier factories, specifically in the Hansae factory in Vietnam, which employed 8,500 people.

The WRC conducted customary off-site interviews with Hansae employees in October 2015, and found extensive wage theft, denial of sick leave, illegal restrictions on worker bathroom use, and dozens of health and safety violations, including many cases of workers collapsing.

Factory management did not allow the monitoring group to visit the premises afterwards, and Nike declined to facilitate access. Nike is not the only buyer from the Hansae factory, but was the only one producing collegiate apparel at the factory. Over a year later, in May 2016, the WRC released a preliminary report on conditions at the Hansae factory, based on off-site interviews.

In November, students went without shoes as part of an event titled “Better Barefoot than Nike,” to protest the university’s involvement with the company. The same month, Georgetown Solidarity Committee held a mock celebration on the issue, singing songs and asking participants to pin the tail of “responsibility” to a picture of DeGioia.

On Dec 6, the WRC published a report from the Hansae factory. The group had not been allowed to enter independently, only in conjunction with another monitoring group, one which activists characterize as being in the hands of corporations.

After the report was released, activism culminated in a Dec 8 sit-in organized by the Georgetown Solidarity Committee. Seventeen students rushed into DeGioia’s office in Healy Hall and refused to leave unless the university pledged to not re-sign their licensing agreement with Nike. From the office window they hung a sign: “Occupied until DeGioia Cuts Nike.” The contract was set to expire about three weeks later, on Dec 31. Just outside the office, dozens of students sat around the foyer Christmas tree in support of the sit-in, preparing for finals and awaiting occasional updates from Joe Ferrara, DeGioia’s chief of staff. Seven out of the original 17 students stayed overnight in the building, even after being threatened with academic sanctions.

Nike spokesperson Sabrina Oei explained that the company believed the WRC was not the ideal monitoring group. “We respect the Worker Rights Consortium’s (WRC) commitment to workers’ rights,” Oei wrote in an email to the Voice during the sit-in, “while recognizing that the WRC was co-created by United Students Against Sweatshops, a campaigning organization that does not represent the multi-stakeholder approach that we believe provides valuable, long-lasting change.”

At the time, protesters rebuffed the idea that the university could convince Nike to facilitate WRC access. They demanded ending the university’s contract with Nike entirely. “The university has zero leverage in this deal,” said Dan Zager (COL ‘18), one of the students in the office. “Nike is a multi-billion dollar company and this contract is pennies on the dollar for them.”

Some believed that even if Nike was willing to change, it was more important to send a message. “It’s too late,” said Sophie Bauerschmidt Sweeney (COL ‘17), a protester in the office. “Nike has had too many violations at this point and it’s not a time for forgiveness or giving them a second chance.”

After over 34 hours in the office and significant conversation with staff and the licensing oversight committee, protesters were given a promise that independent WRC access would be a condition of any new Nike licensing contract. “We can get to an agreement where we can have WRC access. That is what’s best for workers,” Ferrara said.

As the spring semester began, Georgetown hired a mediator for negotiations with Nike. Students who had participated in the sit-in were punished with code of conduct violations and the Georgetown Solidarity Committee was placed into a “restoration” phase, not given a budget and only able to get funding through ad-hoc means.

In the new agreement, Nike is legally bound to allow the WRC access to their supplier factories where they are producing the apparel of WRC affiliates. The WRC has identified to Nike the recommended corrective measures at Hansae and received a commitment from the company to press these steps with factory management.

Nike is still the only Georgetown licensee not to sign the university’s licensee code of conduct, which holds companies to the pledge that they will conduct their affairs in a socially conscious manner.

“Nike has over 1000 university partners, many of whom have their own codes of conduct, all of which are subject to change at any given time,” wrote a Nike spokesperson in an email to the Voice. “Given the volume, speed and dynamism of factory production, signing an individual code would not be sustainable to collegiate manufacturing operations.”

Nike has agreed instead to adhere to the IMG College Licensing (IMGCL) labor code and additional provisions. IMGCL, a trademark licensing agent, conducts retail license agreements for Georgetown. According to Cal Watson (COL’ 07), chair of the licensing oversight committee and assistant vice president of public affairs and business policy, any differences between the university’s licensee code of conduct and the IMGCL’s labor code standards are covered in additional provisions.

The Georgetown Solidarity Committee sees the new contract as a significant step.

“This victory is also testament to the power of student organizing in enacting real change on and off of the Hilltop. It was students who were willing to put themselves on the line while our university sent mixed messages to Nike and the Georgetown community,” the group wrote in a statement. “We are optimistic that this will provide momentum for students across the country to continue to pressure their own institutions and take this victory nationwide.”

Lilah Burke Lilah Burke is the former executive news editor of the Georgetown Voice. She graduated from the School of Foreign Service in 2018.