Hook ‘em. Fight on. When the University of Southern California and the University of Texas face off on the gridiron, it is not only a matchup between two of the most storied programs in college football, but also a showdown between the sport’s most identifiable brands. Trojan Red and Burnt Orange hold cherished places in the Pantheon of American culture, and for good reason. Yet, the Trojans and the Longhorns have only played each other six times throughout their legendary histories. Saturday’s heart-pounding match between a resurgent USC and a rebuilding Texas provides further evidence that we, the fans, deserve this battle every year, even if it comes at the expense of the blood pressure (and livers) of the Longhorn and Trojan faithful. Oh, and a hopped up Gus Johnson on play-by-play only adds to the excitement.

Leading up to Saturday’s game, however, not many had predicted an instant classic between the two sides. The young Longhorns, under the tutelage of first-year head coach Tom Herman, sputtered out of the gate, dropping their home opener 51-41 to the Maryland Terrapins. Texas rebounded the following week with a 56-0 drubbing of San Jose State, but the Burnt Orange had already vanished from the nation’s radar. Meanwhile, USC dispatched their first two opponents, including then-No.14 Stanford, adding to the Trojans’ burgeoning hype carrying over from last year’s Rose Bowl against Penn State. Perhaps a blowout was not in the cards, but Longhorns’ fans expectations were tempered, especially given that the teams would meet in Los Angeles.

As much as I may want to indulge in recency bias, I must make it abundantly clear that this year’s match does not hold a candle to the 2006 Rose Bowl. Saturday’s game was plagued by turnovers, missed opportunities, and youthful errors. And yet, for all that the 2017 matchup lacked in terms of execution and elegance, it made up for in sheer drama. A pick-six by the visiting underdogs to silence the crowd? Check. A rookie hometown quarterback completing a go-ahead throw deep into enemy territory with under a minute to play? Check. And a walk-off field goal, in front of a crowd of 84,000? Check. The end result was a 27-24, double-overtime final score, accentuated by the promise of a myriad of “Texas is back!” headlines being pounded out as soon as the last kick soared through the uprights.

Speaking of the 2006 Rose Bowl, there is never a bad time to revisit the greatest college football game of all time. An undefeated USC facing off against an undefeated Texas, with the former roundly being considered one of the greatest teams in the history of college football. The Trojans entered the title game on a 34-game winning streak, while the Longhorns had gone 19 games without a blemish. Each side featured two future top-ten picks: USC boasted Reggie Bush and Matt Leinart, while Texas featured Vince Young and Michael Huff. Bush won that season’s Heisman Award and Young came in second, while Leinart finished in third. In spite of the Longhorns’ own veritable stature and accomplishments, hardly any analysts picked Texas to pull off the upset. ESPN’s purveyor of mascot-heads, Lee Corso, was one of just a few talking heads to pick the Longhorns.

The game would not only live up to the hype, but also exceed expectations. Flash forward to the fourth quarter, with Texas trailing 38-26 with just 6:42 remaining. Vince Young engineered a one-man effort, as he contributed all 69 yards of a two minute, 39 second drive to pull the Trojans within 38-33. The Longhorns got another stop, this time on fourth down, and the rest is history. Young converted on 4th and 5 with eight seconds remaining to give the Longhorns a 41-38 victory and capping off, as Sports Illustrated put it, “perhaps the most stunning bowl performance ever.” While USC would go on to vacate the entirety of the 2005-2006 season and later claim that it has “never lost” to Texas, the result of the 2006 BCS National Championship Game still rings true.

While the aura and hoopla surrounding the 2006 USC-Texas game may never be matched again by a college football game, it stands to reason that two programs capable of bringing the sport back to its pinnacle are, well, USC and Texas. That rematch certainly will not be coming this year, as Texas looks to salvage Tom Herman’s first season by competing in the Big 12 (and avoiding further humiliation by way of losing to Kansas again), and USC reaches for the stars of the College Football Playoff. However, don’t be surprised to see a potential series between these two programs on the horizon. College athletic departments know where money and exposure lie, and in the case of USC and Texas, the answer could not be any clearer. As fans, we get to sit back and hope for another iteration of football Nirvana. 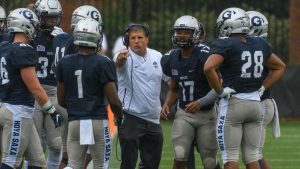