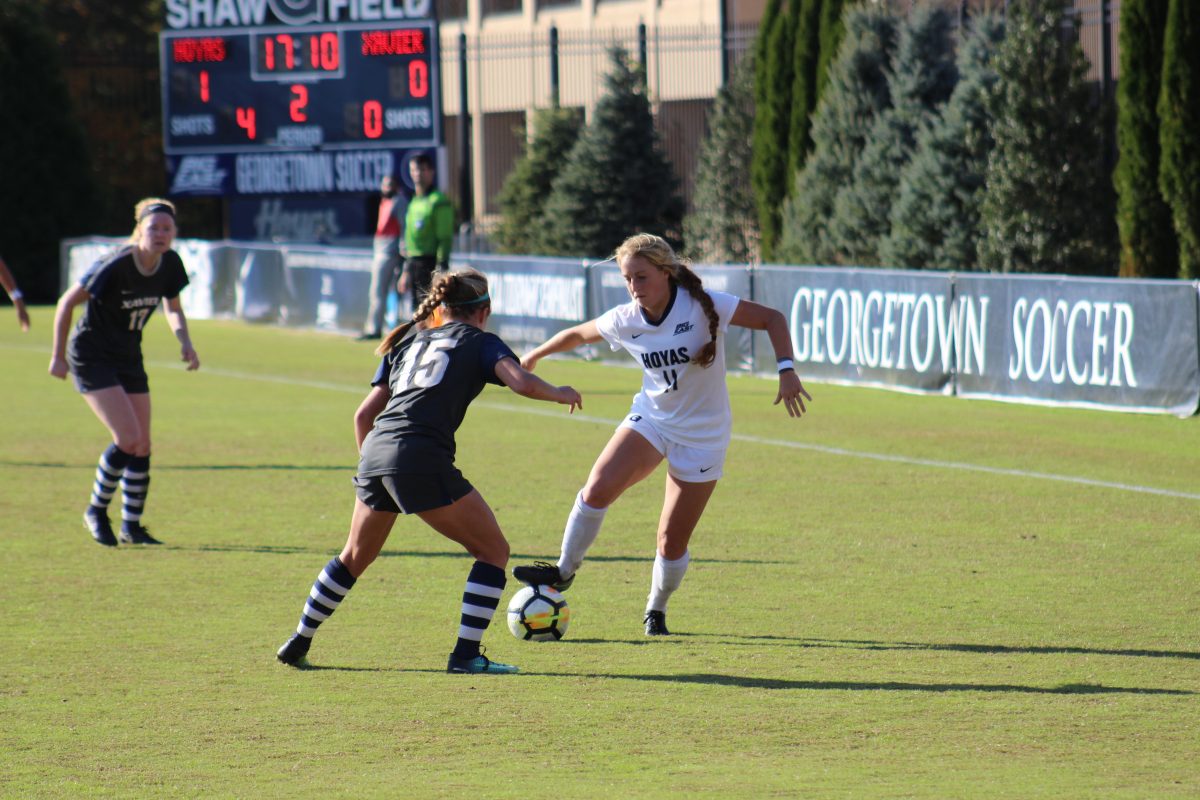 On a sunny Thursday afternoon at Shaw Field, the Georgetown women’s soccer team (12-3-3, 6-1-2 Big East) defeated Xavier (8-7-4, 4-3-2 Big East), 1-0, to clinch the 2017 Big East regular season title on Senior Day. Senior midfielder Rachel Corboz was the difference, netting a 56th-minute free-kick from just outside the penalty area to break the scoreless deadlock. It was a fitting final regular season home game for the decorated senior class, which helped guide the team to the Final Four last season. With the win, Georgetown seals home-field advantage throughout the Big East tournament, in which they will look to defend their title from the 2016 season.

In a game where the Hoyas controlled possession and outshot the Musketeers 19-2, Georgetown struggled to create high-quality chances while Xavier seemed content to primarily defend, and then pick their spots to counter-attack. When asked about his team’s struggles to create goals, Georgetown head coach Dave Nolan said,  “I just don’t think we were firing on all cylinders today. Whether that was the occasion, the fact it was senior day, I’m not really sure.”

With the best chance of the first half, junior midfielder Meghan Shaver’s shot was tipped over the bar in the 29th minute shortly after an effort from sophomore forward/midfielder Paula Germino-Watnick was well saved by the Xavier goalkeeper.

The Hoyas looked dangerous to start the second half, as junior forward Amanda Carolan shot just wide two minutes after the restart. Then, the Hoyas won a free kick to the left of the box that Corboz rifled in, but no Hoyas could rise to meet it, and it fell just wide of the far post. Four minutes later, Georgetown was awarded another free kick and Corboz made no mistake, curling her shot up and over the wall of Xavier defenders into the top right corner of the net with her left foot.

Play opened up after the goal, as both teams saw more quality looks at the net. After senior midfielder Chloe Knott shot wide for the Hoyas, it took a perfectly-timed last ditch sliding tackle from senior defender Elizabeth Wenger to prevent the Musketeers having a one-on-one look with the goalkeeper. Xavier would win another corner in the 80th minute but make nothing of it, and the Hoya defense made it difficult for them to create any chances from open play. The Hoyas nearly added an insurance goal through Carolan in the 85th minute, but held on comfortably as the final buzzer sounded.

The win, and the home field advantage, are hugely important to the Hoyas.

“It feels great to be the first team to [win the regular season title] outright, and we’re super happy about that,” Corboz said. Last year, we had the tournament here and we won it here, and we saw how much it helped us.”

“The home field is crucial, but there’s no point in having it and not taking advantage of it. In the tournament, we’ll play teams that we’ll need to play better than we played today,” Nolan said.

The Hoyas play next in the Big East semifinal at Shaw Field on November 2nd. 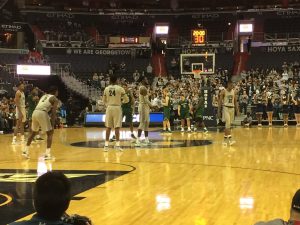 Playing with a Porpoise: Hoyas dispatch Dolphins in Ewing’s debut