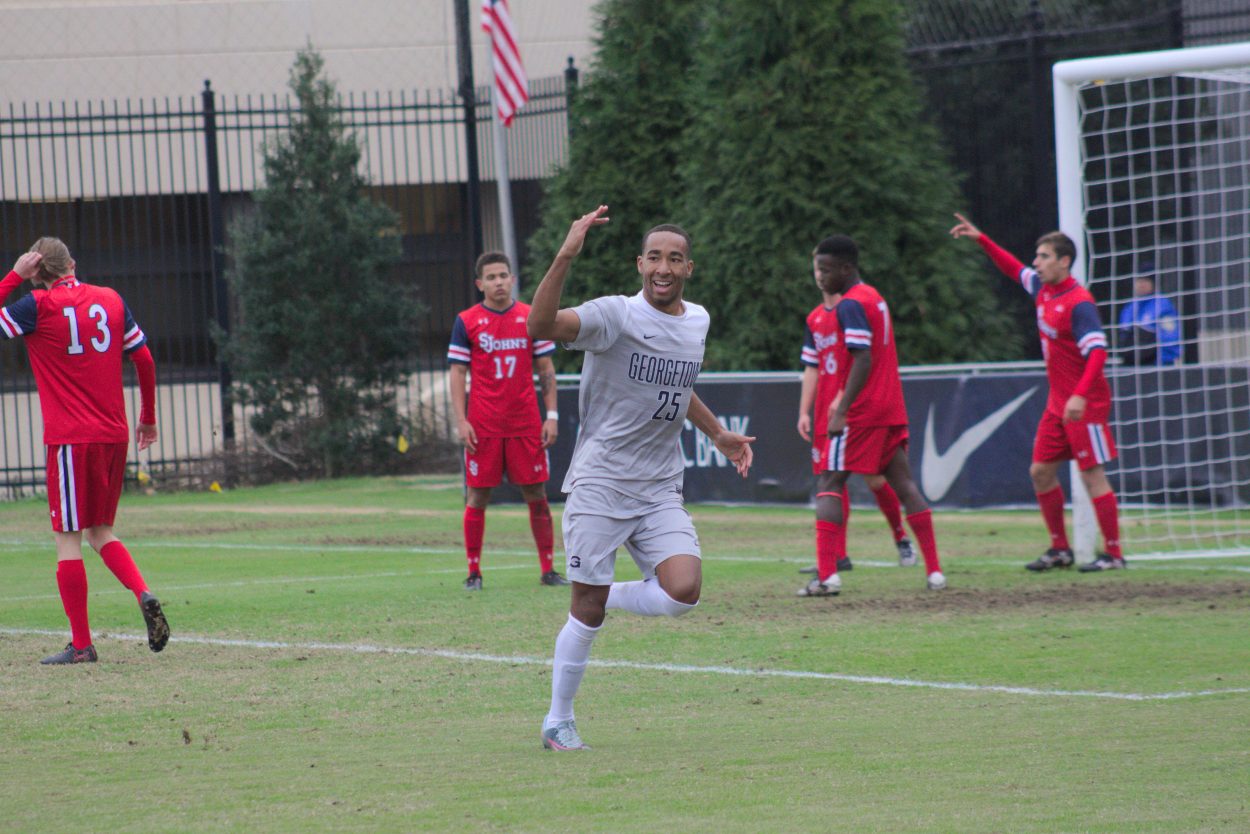 With the win, the Hoyas advance to their second Big East Championship game in three years. In 2015, the team defeated Creighton in a double-overtime thriller at home to claim their first Big East tournament championship in program history. Xavier (12-5-2) defeated Butler (12-5-1) on penalty kicks in the other semifinal, 2-2 (4-1), setting up a Sunday afternoon clash at Shaw Field between the Hoyas and the Musketeers.

It took almost no time for the Blue & Gray to find their stride in the game, as Achara, who made his first start since sustaining a leg injury against Butler over a month ago, found the back of the net just 1:14 after the opening whistle. The ball was initially played into the short corner for senior forward Declan McCabe, who sent a fast and low cross into the box. Achara used his pace to beat the only defender in the box to the near post and directed the ball over St. John’s redshirt junior goalkeeper Andrew Withers to give the Hoyas a 1-0 advantage. 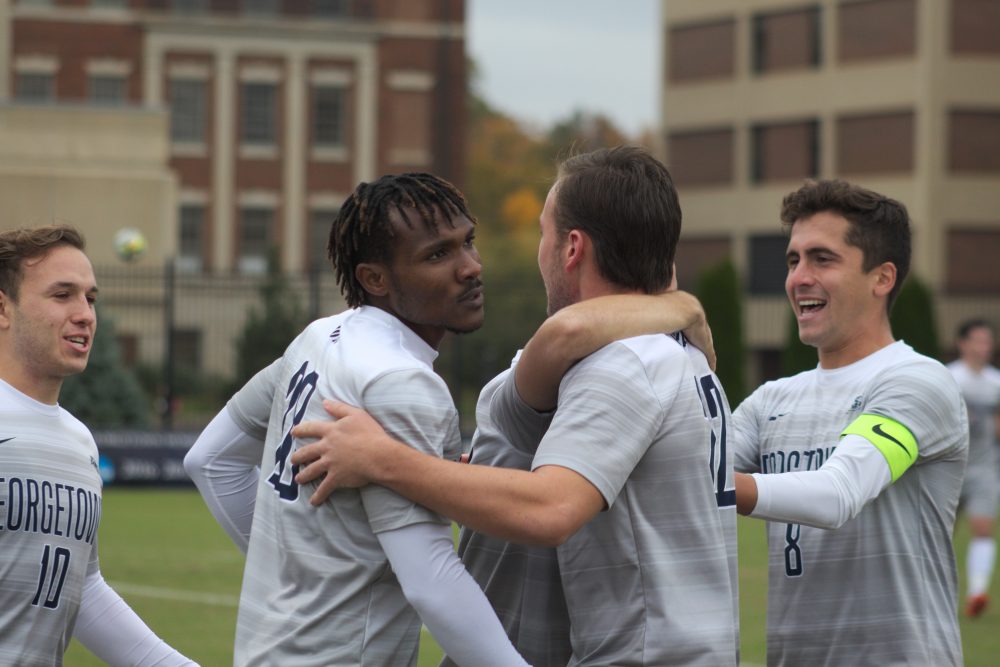 “It feels great,” Achara said of his return to the starting lineup. “I’ve been out for a long time. I’ve just wanted to get back and enjoy playing.”

“It takes off some of the pressure,” Georgetown head coach Brian Wiese said when asked about the early goal. “I think it just relaxes you a little bit, which is good. You’re not sitting there with 20, 15, 10, five minutes to play hunting for a goal.”

Georgetown kept its foot on the gas pedal, with Achara creating another chance in the 15th minute. The sophomore received a through ball behind the defense and side stepped the charging keeper, leaving him an empty net to shoot on. But he was unable to find the goal, sending his shot high with his weak foot. Two minutes later, sophomore defender Dylan Nealis played a low cross into the box, which got past a diving Withers. The goal was left gaping, but a pile-up of Georgetown and St. John’s player made a clean shot difficult, and the result was an attempt that miraculously flew straight into Withers’ arms. The Hoyas held all of the momentum in the half by dominating possession, but were unable to get their brace.

“I thought the first 15-20 minutes, to our guys’ credit, was about as good as we could have asked of them. I think if you’re a little grumpy about something, it’s that you didn’t get a second or third [goal],” Wiese said. “We had two great chances that we really should have scored that we didn’t, which kept the game anxiously close.”

After the halftime break, St. John’s began to press Georgetown higher up the field, searching for a goal to keep their season alive. The heightened pressure came with increased physicality, and the game became chippy early in the second half. Five yellow cards were administered in the half, and play was stopped many more times for various fouls. Emotions on both sides ran high in a classic win-or-go-home Big East slugfest.

“I would have liked to have seen a little more composure out of our guys. I thought we got involved in a few things and let the physical play get a little emotional, which you always have to be really careful about,” Wiese said. “Having said that, it’s a Big East semifinal. You’re trying to end a team’s season, which is never an easy thing to do. So, you’ve got to scratch and claw a little bit and I thought the guys rose to it and managed that decently well.”

“We kind of lost our discipline a little bit. But you just have to match up and be strong and try to do the best that you can,” said Achara.

The Hoyas extended their lead in the 66th minute on a corner kick goal from Dodson, who was named Big East Freshman of the Year earlier in the week. Senior midfielder Christopher Lema played the corner to the near post, where Dodson got a foot to the ball from three yards out for the tap-in goal. Dodson now leads the team with nine goals on the season.

St. John’s didn’t go down easily, however. An errant throw from Nealis in the 77th minute started the Red Storm’s counterattack, and Cooksley made the Hoyas pay. He ran onto a through ball on the right side of the box of the box, making sure to put the ball on his dominant right foot. Cooksley slotted the one-on-one chance past junior goalkeeper JT Marcinkowski into the net, giving St. John’s life, down 1-2.

The Hoya defense would not cave-in, however, and Nealis nearly added a third goal for Georgetown in the 80th minute, but a well-timed save from Withers prevented the insurance goal. In the end, the Blue & Gray walked off the field as 2-1 victors.

The Big East Championship will be decided on Sunday at noon. Follow @GUVoiceSports on Twitter for live updates throughout the action. The game will be televised on Fox Sports 2.