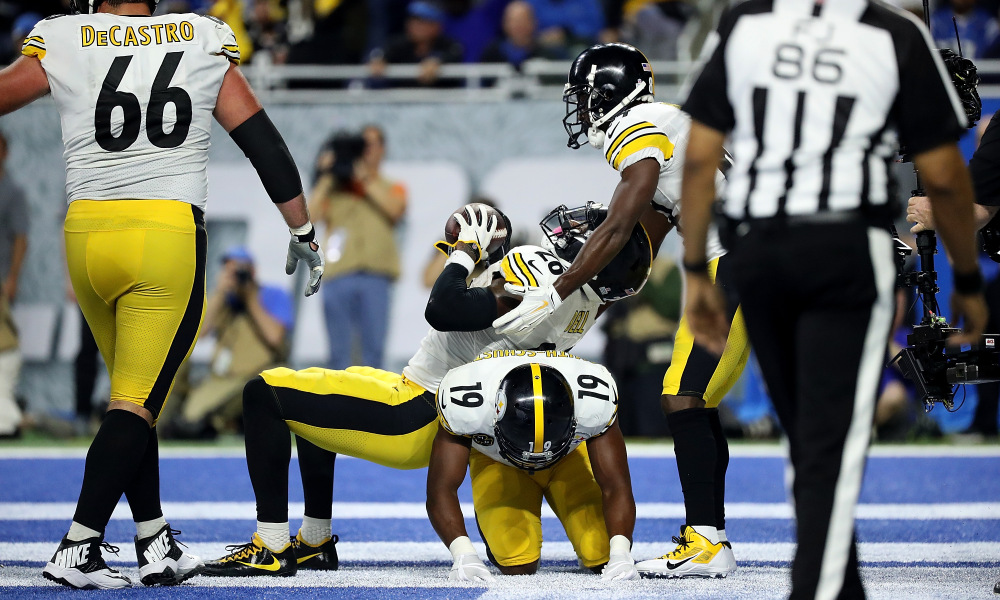 When the NFL relaxed its excessive celebration rules in May, fans rejoiced. Watching Saturday’s USC-Colorado game and seeing three unsportsmanlike conduct penalties for spinning the ball, I was glad that the NFL finally decided to let the players enjoy themselves after a big play. The Eagles like to play baseball, but the real kings of the celebration world are the Steelers. On the iPhones of running back Le’Veon Bell and wideout JuJu Smith-Schuster, lists of celebration after celebration wait to be unveiled to the viewing audiences of the NFL. If the 7-2 Steelers really find their offense, which could happen at any time with all the weapons the team has, we’ll get to see more of the new celebrations.

Through Week 9, here are the top 5 Steelers touchdown celebrations.

Smith-Schuster has already acknowledged that his execution was poor, and it’s clear that the 20-year-old does not have a career cut out for himself in the WWE once he retires. But reenacting Green’s chokehold on the Jaguars corner that led to a double ejection (but somehow no suspension for Green) was a brilliant way to mock a division rival.

Here’s the start of the celebration game for Pittsburgh. In Week 2 against Minnesota (who has now turned out to be good), Smith-Schuster’s first career touchdown was capped by the first group celebration from the Steelers. It led to a delay of game penalty before the PAT, but you have to cut them some slack. They were still learning how long they have. It’s not a great celebration in and of itself, but it let us know to expect more of the same from the Black and Gold.

Here’s the backstory. JuJu Smith-Schuster is the youngest player in the NFL at 20, and only just recently got his driver’s license. During that Sunday night game in Detroit, he wasn’t able to drive, so he biked to practice. Except that week his bike was stolen. Antonio Brown offered two free Steelers tickets to whomever returned Smith-Schuster’s bike so that the rookie didn’t have to walk to practice anymore. It was eventually returned, and Smith-Schuster put a chain around the stationary bike after his 97-yard touchdown to signal his intent to hold onto his bike. And he got to do it on Sunday night football.

These celebrations are a team effort, so when Le’Veon Bell scored a rushing touchdown in same Sunday night game in Detroit, Smith-Schuster took the non-glory role as his bench while Brown set up as the spotter. The offensive linemen were there as the encouraging lifters in the gym, and it’s topped off with Bell finishing his set by powering through the last rep with some help from his spotter.

There’s a lot to be impressed with in this celebration. First, that Bell managed to find a hiding spot in a fairly bare end zone when Smith-Schuster hardly counted to five; second, that Smith-Schuster found his teammate so quickly (probably because there’s only so long before the play clock runs out); and third, that this celebration was apparently spontaneously agreed upon in the Heinz Field tunnel. The only question I have is, if there was a base, would Bell have outrun Smith-Schuster, or would he have been the next seeker?

The 20-year old receiver has brought fun to the Steelers offense (and it’s worth noting that four of the five listed celebrations followed his scores), and he seems to be the creative spark behind the Steelers’ elaborate celebrations. None of them were something that Chad Johnson/Ochocinco did in his career, and he did everything. That’s the most impressive aspect of what Smith-Schuster has done. With all the weapons that Steelers have, there will be more, and hopefully Bell and Smith-Schuster release their lists after the season is over so that we know what we could have missed.