I’ve developed a set of strategies so that staying awake is no longer just a matter of endurance.

Rationing caffeine intake is an artform. Personally, I tend to start with a black eye—a coffee with a double shot of espresso—and buy another red eye—a coffee with a single shot—every few hours. I’ve found that no matter how addicted to caffeine you are, you can still maximize the benefits of coffee by drinking it at the proper intervals. Toward the end of the night, tea or regular cold brew will suffice, as long as you have a steady supply. (The exception is when you work until morning and still have to go to class, which calls for a sigh and a 5-Hour Energy.)

Over time, sleeplessness becomes so familiar that you almost stop thinking about it. To carry on in this way over an extended duration—that is, more than a week or two—takes a completely altered mindset. You surrender any expectation you once had of aligning to a circadian rhythm. You stop caring what the clock says. You accept the incessant body aches. You habitually specify “a.m.” or “p.m.” to refer to single-digit times. You come to accept this strange new reality.

But this reality doesn’t seem so strange in the context of Georgetown. Just walk into Lau some night, and listen closely. The most prevalent sarcasm here revolves around sleeplessness. We repeat “I’ll sleep when I’m dead,” we tell stories of “back when I used to sleep,” we joke about how many Awakenings to buy before Midnight Mug closes at 2 am. But it’s nothing to worry about, according to the number of “This is fine,” dog-in-the-fire meme printouts that I’ve seen adorning dorm rooms around campus. Everything is fine, right?

That’s exactly the self-deception I’ve engaged in for the past few semesters. I had thought I deceived myself in the same way in high school, but as it turns out, quick access to a 24-hour library has brought it to a new level. There was a time in the spring semester of my freshman year when I only fell asleep by accident and only woke up in a panic. The panic probably emerged after I slept through 10 am. lab a couple times, or when an 8 am. exam appeared on my finals schedule. It’s a damn good thing that my watch displays the date.

This year, the closest I’ve come to a solution is to stay up for morning classes rather than to try and wake up for them. Once, this meant staying awake for 40 consecutive hours—and I hate to admit it, but I’m still a bit proud.

I wish I could tell the story of how I finally hit a breaking point that inspired me to turn my life around, to push beyond the cultural expectations of an over-achieving school, and then describe the process by which I reclaimed my circadian rhythm and found time to sleep. But the truth is, I decided that I would stay up for all of tonight before I sat down to write this. I don’t feel any sort of hesitation, disappointment, regret, or drive to do otherwise. I’m not trying to complain, either—I couldn’t, when over half the people reading this are probably feeling the same way.

I’m tired of hearing “you’re not alone” as a way to close the conversation. Sure, we may be here to look out for each other, but that doesn’t justify such a large portion of the school being  burdened beyond the possibility of sleep. We need to stop telling ourselves that sleep deprivation is normal, or necessary, or even acceptable.

Ideally, I’d like to see a Georgetown where students respond to a friend’s sleeplessness in the way one might respond to a friend’s drug addiction—this isn’t healthy, you need to stop, I see how it’s affecting you and I’m not okay with it. Quite frankly, the strained “LOL, same!” response only perpetuates the behavior.

Realistically, I’m not sure such a world is possible. The generations before us—parents, professors, even siblings—suffered in the same way that we do now. It’s meshed into society’s core as one of the most famous aspects of the college experience, up there with drinking too much and learning to live on your own. The intense competition for class rank and careers will always favor more hours, more work.

I’d be lying if I said I enjoy staying up so late so often, but I can’t say that I hate it, either. I’ve found a thrill in it, and it feels like a part of me. I love seeing Lau 2 empty out, and I find peace in working through the night without caring whether I sleep or not. I love stepping out at 4a.m. and seeing how the stars have moved since the last time I sought fresh air. I love hearing the birds start to sing over Healy lawn, and I even love being the first to arrive at Sellinger in the morning.

But maybe I’ve just fallen too deeply into our sleepless culture. 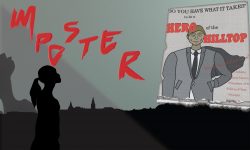