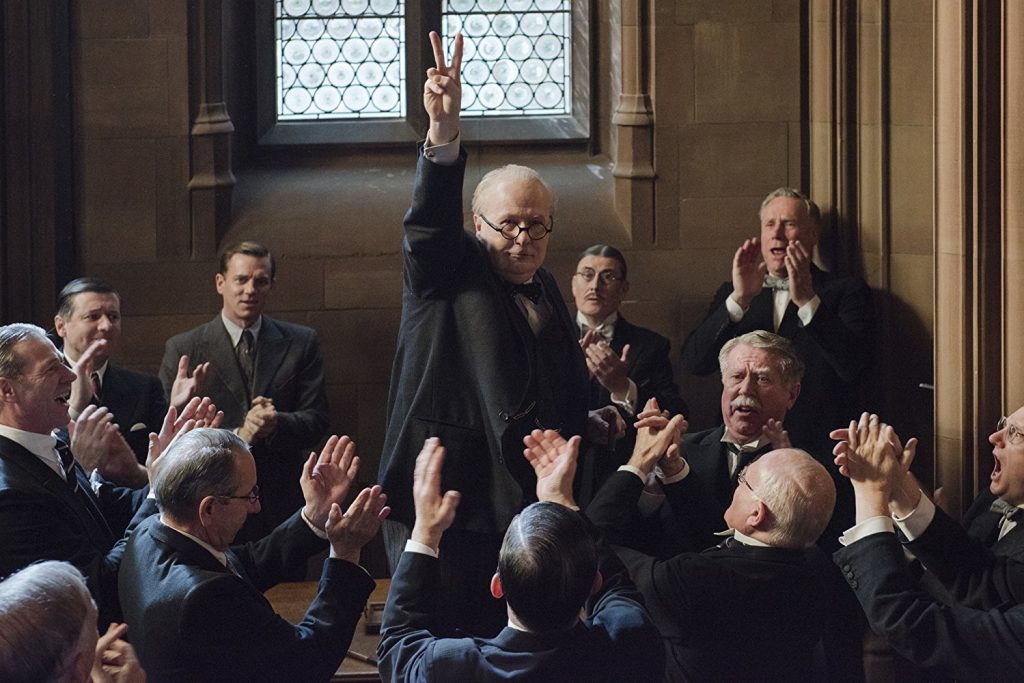 Gary Oldman’s Churchill is a Towering Figure in Darkest Hour

Many will want to refer to Darkest Hour, Joe Wright’s latest directorial effort, as a history lesson. The film traces Winston Churchill’s first month in office, providing a detailed look at the politics behind the British decision to finally engage in total war with Germany after the fall of Western Europe. However, the film serves as more than a simplistic historical account, providing an exquisitely crafted study of one of Britain’s most recognizable faces, with a powerhouse performance by Gary Oldman at the helm.

It is early May of 1940 and, given the worsening crisis in Europe, Parliament has lost its confidence in the current Prime Minister, Neville Chamberlain (Ronald Pickup), demanding the appointment of a new head of government. The obvious choice for the majority party, and for King George VI (Ben Mendelsohn) himself, is Lord Halifax (Stephen Dillane), but the opposition will never accept him; at least not until a weaker successor has failed. Enter Oldman’s Churchill, and you have just set up one of the most stirring political dramas of the year.

The following scenes, which make up the bulk of the film, allow the audience to observe the thought processes of both Churchill and the British government. More often than not, these two forces of power did not see eye to eye in the first stages of the Churchill administration, imbuing the narrative with both exciting politics and high drama. On the one hand, Parliament views the war against Germany as a losing battle given the Nazi regime’s military prowess, advocating in favor of a negotiated peace. On the other, Churchill is unable to understand how negotiations with Germany could bring security to Britain as Germany has already taken Eastern Europe, and the West is on the cusp of collapse. “You cannot reason with a Tiger when your head is in its mouth,” Churchill exclaims in exasperation at one point; for him, complete war is the only answer.

As both sides continue arguing, further military disasters are taking place in mainland Europe. British forces have been cornered by the Germans in the French beaches of Calais and Dunkirk, prompting the government to choose between which infantry to save, since saving both is not an option. If you have seen Nolan’s Dunkirk you know how the situation turns out, but that does not diminish the emotional impact of watching Churchill grapple with these answerless questions. As the month nears its end, the audience is treated to superbly-scripted and  thrilling sequences of political debate and Parliament intrigues, accompanied with rousing speeches, heartfelt conversations, and a surprisingly great deal of humor and heart.

At the center of it all there is the pleasure of watching Gary Oldman play Winston Churchill, utterly transformed and unrecognizable under meticulously rendered makeup. To refer to his performance using the verb playing, however, is a rash understatement to what unfolds on screen. Oldman embodies every single mannerism and nuance of the character, not to mention his sharp wit, providing a poignant portrayal of this seemingly overly-confident man, who, when alone, was often plagued by his insecurities. Many shots in the film, splendidly constructed by French cinematographer Bruno Delbonnel, seek to emphasize Churchill’s solitude in these difficult times. A sequence in which Churchill sits in his tiny phone room as if he were in an asphyxiating box, surrounded by nothing but darkness, is particularly noteworthy. By the end, Oldman has triumphantly avoided caricature, portraying a full-bodied human being; a long-awaited Oscar may very well be in the horizon.

The work by the supporting British cast is also very strong. Ben Mendelsohn provides a refreshing take on the stuttering King George VI, portraying him as a principled man who is not afraid to take risks. Stephen Dillane is also fascinating as Churchill’s main detractor, always watching and conspiring with an infuriatingly self-righteous and condescending gaze. Lily James does fine work in a minor role as Churchill’s secretary, silent but determined, always up for the task. Yet, the one who truly shines is Kristin Scott Thomas as Churchill’s wife Clementine, supportive but unapologetically tart, continuously speaking her mind to the man she loves,and whom she sees as her equal.

The production values, as we have come to expect from a Joe Wright film, are all top notch, especially the beautifully absorbing sets and delightfully detailed 1940s costumes. A special mention should be made to composer Dario Marianelli, who has crafted an appropriately thunderous, yet stirring score that is on par with the performance by the film’s protagonist. Wright himself has done an admirable job in orchestrating all these elements to create a harmonious whole, allowing the movie to flow smoothly from hypnotic set-piece to hypnotic set-piece. The film might have three too many scenes towards the end, but they work well enough that one cannot help but forgive the director for his ambitious theatrical scope and vision.

All in all, Darkest Hour is one of the best films of the year, with Oldman giving a performance for the ages. Due to its solemn subject and themes, one could merely label Darkest Hour as a ‘serious movie.’ However it was so utterly captivating from start to finish that it could easily be recommended to anyone who is up for some serious fun.

Critical Voices: Björk, Utopia
Is This the Year for Wichita State?