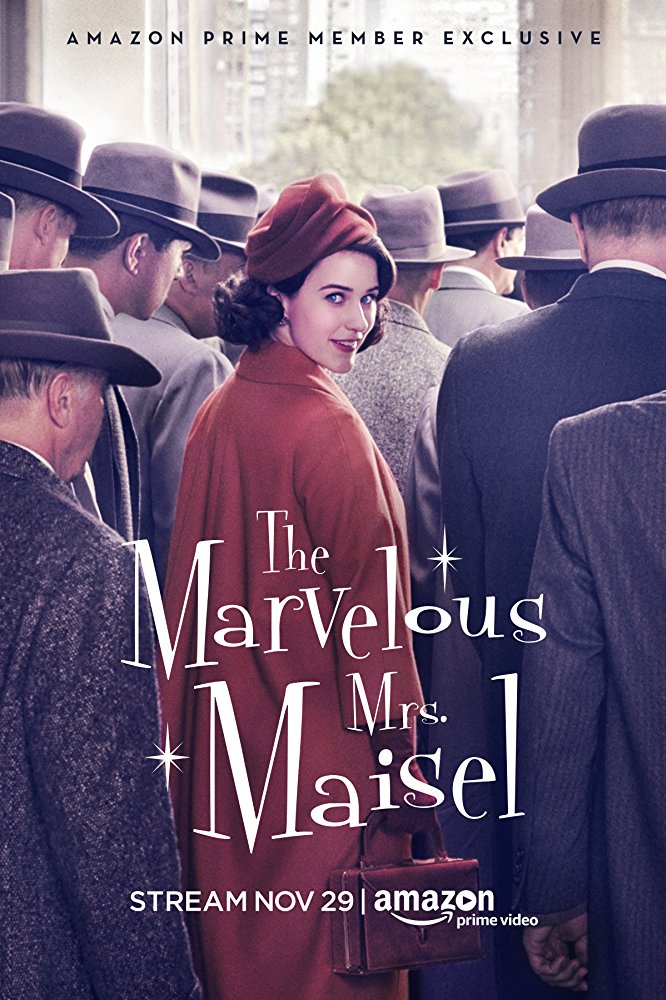 In a previous piece about Gilmore Girls, I trashed the show because that’s what it is: garbage. It perpetuates a ton of stereotypes about women and about relationships, and I wanted none of it despite the fact that I gleefully watched all of it. So I was happily surprised when the show’s creator came out with The Marvelous Mrs. Maisel, an empowering, positive show about a Jewish woman who falls into stand-up comedy. The show, set in 1950s New York, is completed by incredible costumes and amazing casting.

While the protagonist, Midge Maisel (Rachel Brosnahan), may be chock-full of Jewish female character tropes, none of them are overwhelmingly or unrealistically negative, and all of her female-minded qualities are strong,powerful and, well, perfect. None of her mistakes or misadventures are downfalls, and she is one of the most likeable characters in current television history.

For instance, the night her husband Joel (Michael Zegen) leaves her, she gets drunk, goes to a comedy club, and does a hilarious stand-up routine, although she does get arrested for flashing the audience (whoops). Her drunkenness, her profanity, her indecency, and her subsequent arrest aren’t embarrassing or uncomfortable flaws, but instead are empowering. This is Midge taking charge of her known humor and using it to her advantage, which in this case is comedic relief from her tumultuous life.

One of my favorite things about the show, though, is how terrible her husband (well, almost ex-husband) is, despite the fact that throughout the show I am kinda sorta definitely rooting for him. Not to mention how confidently Midge handles his idiocy. First of all, he leaves her for his secretary and is generally a mess of a man. Also an aspiring comedian, he steals his comedy routines and most of his original jokes fall flat. Furthermore, he lacks any ability to stand up for himself, and instead of trying to work things out with Midge, who is the most put-together gem of a woman I have ever seen, he leaves her without a second thought.

So why is he my favorite part of the show if he’s so goddamn awful? Because, at the same time, all the flashbacks of their relationship show that he is a good man for her, especially through his charm and his adoration, and throughout the course of the show the two manage to sort of get back together. The final scene of the season shows Joel beating up a guy for heckling Midge, and then he walks down a New York street saying to himself “She’s good” over and over again, acknowledging that Midge is a comedic genius despite his patriarchal dismissal of her talent. And because all too often in shows with female protagonists the men are inexplicably bad or not bad at all, which is unrealistic because men are terrible.

By the end of the show, I really want to root for Joel, because he loves his wife and he is sort of funny, though not as funny as her. But I can’t root for him because HE HAD AN AFFAIR AND THEN LEFT HER BECAUSE OF HIS OWN DAMN STUPIDITY. Joel is by definition a problematic fave. Midge, however, is the most unproblematic fave there is. She radiates joy. She’s the quintessential 1950s New York woman in a good way. The Marvelous Mrs. Maisel is one of those feel-good shows that is more than just cheap comedy and simple story lines. It is smart, confidence-boosting and complex. It’s full of real-life issues and realistic solutions. And it’s one of the best feel-good shows I’ve watched in a long time.