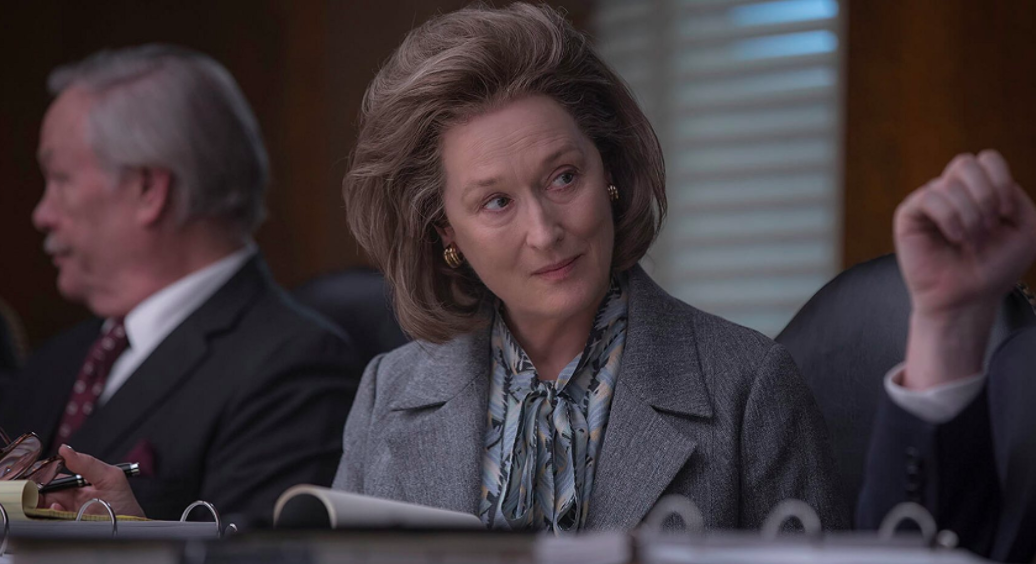 The Post perfectly captures elements of America’s turbulent 1970s, including female leadership, the end years of the buddy-buddy relationship between the press and Washington, and the Nixon White House. Expert directing by Steven Spielberg, music by John Williams that winds the film’s tension, and precise performances by Meryl Streep, Tom Hanks, and Bob Odenkirk, to name a few, make this film not only entertaining, but important to the memory of the American 1970s.

Katharine Graham (Streep) never expected to become the leader of The Washington Post. After the unexpected suicide of her husband in 1963, Graham assumed leadership of the paper. Previously content as a wife and mother to their children, circumstance forced Graham  to make the difficult decision to rededicate her life to the continued success of the once-local paper. In 1971, Graham was faced with a decision which would change the direction of The Washington Post’s future. Aided by the encouragement of Executive Editor Ben Bradlee (Hanks), Graham decided to follow the lead of The New York Times, publishing a series about the leaked Pentagon Papers, which revealed years of undisclosed, enlarged U.S. involvement the Vietnam War.

The Washington Post was not the first to publish the Papers, yet the significance of the decision to do so is not lost in The Post. The Times may have been first, but The Washington Post continued the fight to publish the truth following the initial silencing of The Times by the Supreme Court. The centrality of The Post to the complete publishing of the Papers is enforced by Spielberg with a tension that draws out through the entire length of the film. In scenes that chronicle Bradlee’s hunch that The Times was on the verge of breaking a big story, he sends an intern to The Times’ office to covertly find out what the next headline will be. Later, journalist Ben Bagdikian (Odenkirk) crosses town in the cover of darkness, uses many a dirty payphone, and eventually collects the leaked Pentagon Papers off of a motel bed. Espionage and secrecy are woven into the tense fabric of The Post, and they hook viewers right from the start.

Throughout the film, Graham overcomes the challenges she faces while trying to assert her leadership within the company. Streep’s performance, filled with telling glances, well-timed pauses, and slight, nervous fidgets, draws the viewer into Graham’s perspective. She is a leader in name, but is boxed out by her self-important, male board members, headed by the particularly patronizing Arthur Parsons, played by Bradley Whitford. Graham’s close family friend and former Secretary of Defence Robert McNamara, played by Bruce Greenwood, represents the life Graham lives: one entwined with Washington insiders, friends who she may lose publishing the Papers. Over the course of the film, she goes from reserved and unsure to taking a stance and making a decision that helped to intensify the American response to the Vietnam War. Streep’s performance makes this transition subtle and real.

The Nixon White House is portrayed through voyeuristic, through-the-window shots that put the former president under the scrutiny of the world. His face is never shown, but recordings of his voice play over his silhouette. He is always yelling and angry, scolding a voiceless person on the other end of the phone about the injustices of the breach of security that led to the leak of the Papers. With each sequence, his voice reveals that he is becoming more and more agitated. Through this lens, viewers see a new perspective—that of the claustrophobic Nixon who is nearing his breaking point. This progression of anger also serves to add to the overall tension of the film.

Moments near the end land a bit heavily. After a successful Supreme Court hearing which allows the press to continue to report on the Pentagon Papers, Graham comes down the steps of the court through a river of silent, awed women. This needless shot could have been done in a much more subtle, realistic way. Similarly, a sequence at the front end of the court scene features a sympathetic woman who works for the prosecution, but who assures Graham of her support in solidarity against bossy men in the workplace. This too feels unnecessary and unrealistic, and the point would still have been similarly understood in a more subtle manner.

Tension in The Post draws viewers further and further into the story of Graham doing her best to gain control in a seemingly impossible situation. It peeks behind the curtains into a shrinking White House, with a frantic Nixon itching to escape. It presents the race to capture the Pentagon Papers and get them out to the American public, where they would influence the end of the Vietnam War and the way Americans saw their government. The Post balances the many themes it deals with skillfully, and the quiet tension of the film keeps viewers hooked on every well-thought detail.