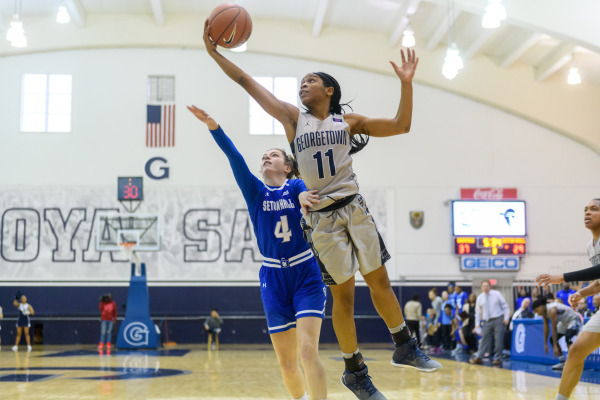 “At shootaround, I thought we came in not focused. It’s the same way we started,” head coach James Howard said.

Freshman forward Tatiana Thompson livened Georgetown’s offense in the second quarter, as she provided eight points off the bench in the second period. Thompson and senior guard Mikayla Venson, who was honored for 1,000 career collegiate points before the game, were a perfect 3-3 from beyond the arc in the quarter, and the Hoyas extended their halftime advantage to eight points.

“We play seven, really, and we know that Tatiana Thompson and [sophomore guard] Morgan Smith have to give us some solid minutes off the bench,” Howard said. “We want them to play within their strengths, not try to do anything that they can’t do, but just do what they can do, and I thought they did that well today.”

The Hoyas’ advantage in the first half came from their superior ball movement, with 13 total assists compared to the Pirates’ five, as well as forcing Seton Hall into 10 first half turnovers. White, however, scored just two points and was 0-6 from the field.

Butina led the Pirates back into the game in the third quarter with seven points, even as Georgetown forced the team into seven turnovers. Seton Hall shot 50 percent from the floor in the third, while Georgetown’s shooting numbers fell to 28.6 percent after shooting 40 percent in the first half. White, however, started to heat up scoring eight points in the quarter to give the Hoyas a five point lead going into the fourth.

White took over the game in the final period, scoring 11 points in the final quarter to put some distance between the two teams. Georgetown shot a blistering 58.8 percent from the field in the final period, as White and Petke, who scored eight points in the fourth, combined to miss only one field goal (8-9) and one free throw (2-3). Burton notched another four assists as Georgetown finally dominated inside, scoring 18 points in the paint to Seton Hall’s two. Howard was able to rotate his bench in, giving his younger players more time on the court after a competitive three quarters.

“It was just us being more aggressive,” White said of the dominant fourth quarter. “Making shots, just executing.”

The Hoyas host St. John’s (14-11, 7-7 Big East) on Sunday. The game will tip off at 2 p.m. ET and streamed on the Big East Digital Network. Follow @GUVoiceSports on Twitter for live updates and breaking news. 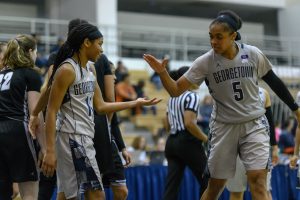