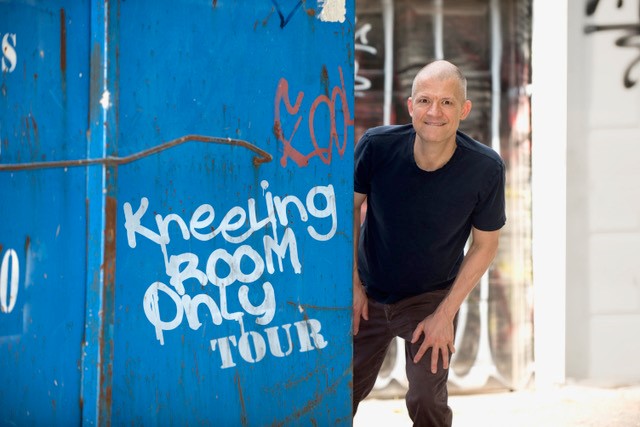 Jim Norton has come a long way from his early start in stand-up comedy. To date, he is the best-selling author of two books, Happy Endings: The Tales of a Meaty-Breasted Zilch and I Hate Your Guts. He has appeared in television and film, including the FX sitcom Louie and, more recently, in Amy Schumer’s Trainwreck. Through it all, Norton has remained true to his roots as a stand-up, and is currently on tour with his newest show, Kneeling Room Only. The tour sold so well in its early months that Norton is now adding dates into the spring and summer. In just a few days, he’ll begin a weekend at DC Improv Comedy Club. The Voice got a few minutes with Norton to chat about Kneeling Room Only, what’s next for him, and the art of facing rejection.

Norton’s ultra perverse stage persona does not lead one to think that he would be such a courteous, relaxed interviewee. “I’m easy going… [the stage persona] is an exaggerated version of myself,” he said. Humble, gracious, and funny, Norton is not only fun to watch, but fun to talk to.

Fresh off of his wildly successful tour Mouthful of Shame, which is currently available on Netflix, Norton is glad to be on to new material. Despite his recent success, though, Norton has remained humble.

“I’m always grateful that anybody shows up. You know, you’re always afraid when you put a tour on sale that it’s just going to be you with nine people in a room,” Norton quipped. His involvement in various projects has kept him working near constantly. Why does he stay so busy?

“It’s basically just desperation. I do a bunch of things mediocre, so I try to just, kind of, stay afloat… I never take it for granted.”

Norton’s schedule has afforded him little free time, but in recent weeks he has allowed himself to slow down and work on other projects. A new book may be in the works, but for now he’s leaving the project open-ended. As for its fundamental theme (“I honestly don’t know” he said), he is writing bits and pieces about the self-deprecation central to many of his jokes, something the book might reflect.

Heading into D.C., Norton claimed he will not cater his show to the city’s audience. For any given joke, “half the country will agree, the other half won’t.” As far as the question of topics that are “off-limits” goes, he is unequivocable. “There should never be any sort of censorship in any form of communication. I don’t want anyone telling me what I can make jokes about.”

True to his style, Kneeling Room Only includes stories from Norton’s personal life as well as commentary on current events and politics. Additionally, D.C. audiences can expect a bit of improv. “You get bored of saying the exact same thing in the exact same order every night; [improvisation] keeps [shows] really, really interesting for me.”

With such success, Norton has learned how to deal with rejection in his career.

“Rejection itself is not the big deal, it’s what you do with it,” he said. “All you have to do is learn from it and move forward, and realize it’s not a definition of who you are. You learn a little something from both… It’s not the end of your journey; it’s a little bit of a left or a right turn.”

Though recently some of Norton’s projects have met dead ends, including his talk show The Jim Norton Show, he has continuously picked up again and headed off to new things. Jim Norton is becoming more well known the way one ought to: through hard work.

Further information about  Kneeling Room Only can be found here.