GAGE lit up the ICC with their logo in March to agitate for a union election agreement. Photo: Lilah Burke

Georgetown University and the Georgetown Alliance of Graduate Employees (GAGE) signed an agreement today to hold a union election for graduate student teaching and research assistants in the Graduate School of Arts and Sciences. The election, set for this spring, will ask eligible students to vote by secret ballot on whether they wish to be represented by the American Federation of Teachers (AFT), the union GAGE has affiliated with. If a majority vote in favor of unionization, the university has pledged to recognize the union as the representative for all graduate student assistants.

This election will not be overseen by the National Labor Relations Board (NLRB), which typically conducts union elections. It will instead be conducted by the American Arbitration Association. Neither GAGE nor the university will have the option to appeal to the NLRB. GAGE proposed this arrangement of a third-party election arbitrator to the university in December, fearing that an appeal to the NLRB could result in a reversal of the decision that grants graduate students the right to organize. Other universities, including New York University and Cornell University, have also chosen to pursue third-party arbitrated elections in their quest to unionize.

The agreement also outlines the primary role of graduate student assistants at Georgetown. “[All parties] recognize that graduate students have a fundamentally educational relationship with the University,” the agreement reads, “but also believe they should have a stronger voice regarding the terms under which they serve as Graduate Student Assistants.” The university previously argued in December that this “fundamentally educational relationship” meant graduate students were ineligible for unionization.

GAGE celebrated the new deal and expressed optimism for a union contract. “This agreement, the first of its kind between a private university and a graduate union in the United States, guarantees that, when we win, the administration will come to the table and bargain with us on the issues that matter to graduate workers at Georgetown, including wages, health care, family leave policy, fee and tuition waivers, and grievance procedures,” the group wrote in an internal email to members. “Today’s agreement with Georgetown is the direct result of the pressure that we have exerted together with our community allies through rallies, petitions, flyering, social media, and other actions.” 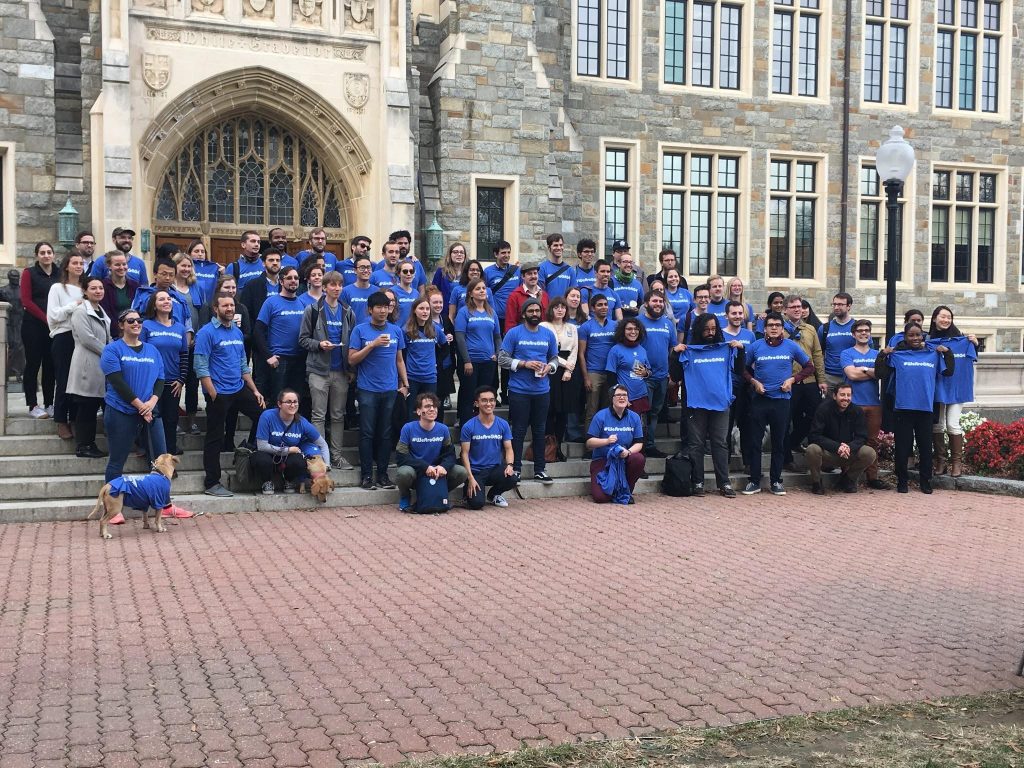 AFT President Randi Weingarten said she believes that the tenacity of GAGE members exemplifies what can be achieved when people unite. “I am so proud of them, and it goes without saying we will support them in every way during the election, bargaining and beyond,” she said. “I am also heartened that the Georgetown administration opted to follow the path of its Jesuit values and labor fairness rather than pursue the Trumpian low road favored by some of their peers. Together, we can work to make Georgetown an even better institution—and this agreement can stand as a model for graduate labor relations across the country.”

Sarah Gilkes, a second year student in Georgetown’s security studies masters program, said she was excited about the future of GAGE. “The election agreement signed by GAGE and the Georgetown administration is truly historic, securing GAGE’s ability to hold an election regardless of policy changes at the national level,” she said. “I’m so proud to be part of GAGE and to have played a role in demonstrating, yet again, that collective organizing works.”

As other graduate student groups across the country are struggling to unionize, Weingarten and GAGE have both expressed the hope that this agreement could pave the way for third-party arbitrated elections at other universities. “This agreement not only lives up to Georgetown’s commitment to just employment but also sets a precedent that graduate unions at other private universities across the country can follow as they continue their battle for recognition,” GAGE wrote in their internal email.

In an email to the university, Provost Robert Groves and Edward Healton, the executive vice president for health sciences, outlined what the union, if recognized, would have the ability to bargain on. “Subjects for bargaining would encompass average service hours, stipend levels, benefits, and grievance procedures for service-related matters,” they wrote. “[A]cademic matters such as admissions decisions, curriculum and degree requirements, organization of programs, evaluation of graduate students’ academic progress, and assignment of research and teaching assistant roles will not be subject to negotiation.”

Groves also underlined what the university has already done to support graduate students. “Regardless of the election outcome, Georgetown is committed to continuing to enhance the resources provided to graduate students,” he wrote. “Already, the Graduate School has significantly increased doctoral stipends since the 2011-2012 academic year, increased the level of non-service support during coursework years, capped teaching at one course per semester, opened new graduate student spaces on campus, and increased recognition awards for graduate-student teaching and research efforts. These initiatives, along with ongoing discussions with graduate students on health insurance offerings, will continue regardless of the election outcome.”

The agreement was signed by Norberto Grzywacz, dean of the Graduate School, for the university; Richelle Fiore, for AFT; and graduate students Hailey Huget, Kevin Carriere, Luca Soldiani, Chad Frazier, and Amrita Pai, for GAGE.

For a full timeline of GAGE’s activity, read our coverage here. 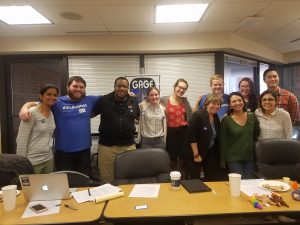