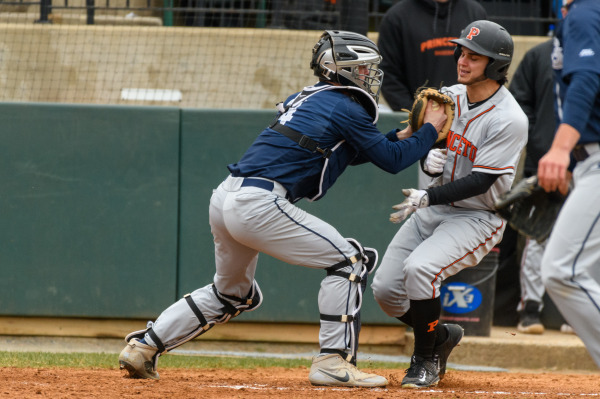 Over Easter weekend, the Georgetown baseball team (7-19, Big East) played a three game set against the UNC-Greensboro Spartans (20-6, 2-1 Southern Conference). The series was played at UNCG Baseball Stadium. Despite the Hoyas carrying some momentum in this series, they were swept by the Spartans.

Senior second baseman Jake Bernstein and freshman right fielder James Gabor each collected two hits in the tilt. The offense totalled a modest seven hits on the day, but also struck out an alarming 11 times. Eight of those strikeouts can be credited to the left arm of junior pitcher Jake Lewis, who tossed five innings of two-run ball. Lewis was effectively wild, walking two and beaning two, but he got the job done for the Spartans. He was relieved by senior right-handers Dan Loats and Jack Maynard, who threw a combined four innings to finish off the game. Maynard notched his third save on the year, while Lewis improved to 2-0. With the loss, Lamon sits at 1-3 on the season.

On Friday, the Hoyas saw more of the same, taking a 5-2 defeat. Junior right hander Jack Cushing, who has mostly come out of the bullpen, got the start for Georgetown. His performance was almost identical to that of Lamon, pitching five innings and giving up five runs. Despite punching out five Spartans, Cushing gave up seven hits in the process. The relief corps were outstanding, however, as sophomore right hander Jeremiah Burke and senior right hander Matt Randolph combined for three innings of scoreless, one-hit ball. Redshirt junior second baseman Austin Embler had a big day at the plate for the Spartans, going 3-4 with an RBI double in the second inning.

Bernstein continued his hot hitting with three hits, and sophomore designated hitter Freddie Achecar III, senior first baseman Alex Bernauer, and freshman catcher Ryan P. Davis each raked for two base hits. Davis contributed an RBI single in the second inning, scoring Bernauer. However, the Hoyas were held down by a sterling performance from UNCG junior right-hander Matt Frisbee, who turned in five innings on just one run. The Hoyas outhit the Spartans 10-8, but, unfortunately, clutch hits were nowhere to be found.

Saturday brought a much closer game, but the same end result; the Spartans took the finale 5-4. Sophomore left hander Brent Killam pitched well, tossing five innings and giving up three runs, though none were earned. The southpaw struck out six Spartans. Then, sophomore right hander Nick Morreale threw two hitless innings in relief to keep the score close. Senior right hander Jimmy Swad entered in the eighth with a 4-3 lead, but gave up two runs and the lead in the inning. Swad was tagged for the loss, falling to 0-2. Moritz provided the tying and winning runs, as he clubbed an RBI triple to center field and then scored on a passed ball.

Despite scoring four runs, the Hoyas only mustered four base hits on the day. Freshman shortstop Eddie McCabe provided the most offense, ripping a two-run homer to right in the Georgetown eighth. Senior left hander Bryce Hensley was phenomenal for UNCG, firing seven innings and allowing just two runs (one earned). Senior right hander Andrew Wantz threw the final 1.1 innings of the game, allowing a run but picking up the relief victory to improve to 5-0 on the season.

The Hoyas play next on Tuesday against the Coppin State Eagles (8-14-1, 7-2 MEAC). The two teams have already battled this year, when Georgetown was victorious 16-9 at Shirley Povich Field on March 14. The Hoyas will need to cut down on their strikeouts and look to make more contact, as they struck out 33 times over the weekend. First pitch is scheduled for 3:00 p.m. ET at Joe Cannon Stadium in Hanover, Maryland. Follow @GUVoiceSports on Twitter for updates and breaking news. 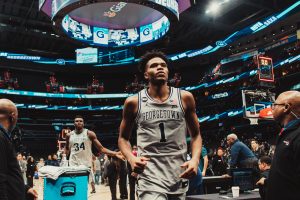