A proposal for an off-site solar farm that will power half of Georgetown’s campus is continuing progress towards approval from the Maryland Public Service Commission.

Origis Energy, the company planning to build and operate the farm, is in the middle of two hearings with the commission. The first occurred on March 20 and the second is scheduled for May 3 in La Plata, Md. After these hearings, Origis will present before the Maryland Public Service Commission in Baltimore.

Georgetown first awarded the contract to Origis in September 2017 for the 32.5-megawatt off-site system. Construction is anticipated to begin as early as fall 2018 on a 537 acre site near the town of La Plata in Charles County, Md. Once completed in June 2019, the 100,000 solar modules will produce enough energy to power 4,400 homes, satisfying about 49% of the the university’s electricity needs.

The solar production plant presents no upfront costs to the university or Charles County as it will be constructed and owned by Origis, creating 200 jobs in the process. At the same time, the company is seeking approval for another solar farm in La Plata to provide electricity for the Southern Maryland Electric Cooperative by mid-2019.

“The project reinforces Georgetown’s June 2017 announcement with other leading American universities reaffirming support of the Paris Agreement on climate change and the transition to a clean energy economy,” a statement on Georgetown’s website reads. University President John DeGioia’s goal to reduce greenhouse gas emissions by 50 percent was first met in 2014 and according to the website, emissions have been cut 71 percent since the base year 2006.

“We are committed to implementing real-world sustainability solutions, using the campus as a living laboratory and developing a long-term sustainability strategy to guide our work,” university spokesperson Rachel Pugh wrote in an email to the Voice.

Pugh also commented on the university’s role as an influencer of initiatives launched by other institutions. “Georgetown’s long-term commitment to the power purchase agreement is a catalyzing investment which enables this project to go forward and brings new renewable electricity to our regional grid,” she wrote.

Samantha Panchèvre (SFS ‘19), who serves as chair of the Georgetown Environmental Leaders (GEL), discussed broader sustainability efforts sought by student groups in an email to the Voice, emphasizing the need for recycling, composting, and waste reduction programs.

“There are many passionate students on campus, concentrated within the groups connected to GEL (GREEN, GUSOA, Animalia, Corp Green Team, GU Fossil Free), who welcome more action by Georgetown administration to align university operations with the goals of the Paris Agreement,” Panchèvre wrote.

DeGioia symbolically signed GEL onto the American Campuses Act on Climate Pledge, reaffirming support of the international agreement signed by over 145 countries in 2006. The accord has been signed by 318 other institutions of higher education.

Panchèvre, also involved with GU Fossil Free, highlighted the irony in expanding renewable energy projects while still investing endowment funds in tar sands oil. “Moreover, divesting our endowment from all companies who extract and refine fossil fuels, as well as commingled funds that include fossil fuels, would more fully position Georgetown as a leader on climate action,” Panchèvre wrote.

The Origis contract includes other components outside the environmental benefits. The company will carry out a scholarship initiative to assist Georgetown in their commitment to meeting all of admitted students’ financial need through the Origis Energy Foundation, created to benefit the areas where solar projects are constructed.

Johan Vanhee, managing director of operations and business development for Origis Energy USA, discussed the foundation and its programs in an email to the Voice.

“Supporting education for underprivileged and disadvantaged young talent, minorities, and veterans is a key mission of our solar philanthropic program,” Vanhee wrote.  “We look forward to working with Georgetown University to create an initiative to best serve your students.”

The solar farm expands upon similar efforts to revamp past on-campus solar projects. These include replacing solar panels on the ICC, which until 2012 sold power back to the D.C. power grid, and the installation of panels on six of the university-owned townhouses back in 2013. 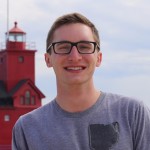 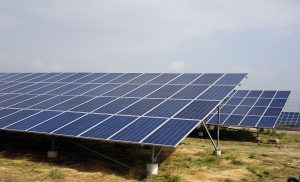 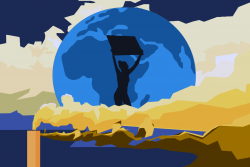 “These include replacing solar panels on the ICC, which until 2012 sold power back to the D.C. power grid,”

This is statement is misinformed. The ICC solar array by design has never had an interconnection mechanism. Thus, the power produced by the solar panels were only consumed in the ICC building. Solar power has never been sold back to the PJM Grid from the ICC array.