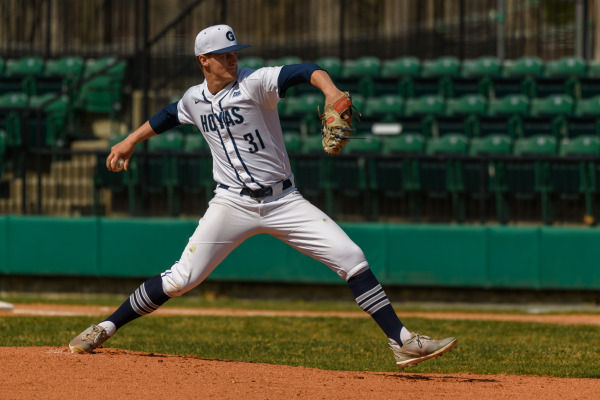 This weekend, the Georgetown Hoyas baseball team (13-20, 2-1 Big East) hosted the George Mason Patriots (14-20, 6-3 Atlantic-10) at Shirley Povich Field for a three game set, including a double header on Saturday. The Hoyas came into the series on a three game win streak, which was doubled after a clean sweep of the Patriots.

On Friday, the Hoyas played a great all-around game, taking the opener 7-3. Junior right-hander Jack Cushing got the ball and did not disappoint. Cushing fired seven innings and allowed three runs (two earned) on an efficient 82 pitches. Sophomore right-hander Nick Morreale entered in relief in the eighth, and picked up right where Cushing left off. Morreale turned in two scoreless innings and gave up just a single.

The Georgetown bats were on fire, racking up 14 hits and knocking junior right-hander Zach Mort out of the game after just 4.1 innings. They had the longball working as well, as freshman right fielder James Gabor and senior second baseman Jake Bernstein hit back-to-back solo shots to lead off the fifth inning. Senior first baseman Alex Bernauer and Bernstein each notched three base hits on the day. The Hoyas also cut down on their strikeouts, which have been an issue this year, and only struck out five times on Friday. Cushing picked up the victory to improve to 2-4, while Mort fell to 3-2.

In the first game on Saturday, the Hoyas continued to employ a balanced effort, as the pitching and hitting were both on point. Sophomore left-hander Brent Killam followed Cushing’s performance with a quality start of his own. The southpaw threw six innings of two-run ball, giving up just five hits and punching out eight. Senior right-hander Jimmy Swad relieved Killam and kept the Patriot bats quiet, tossing three scoreless innings to pick up his fifth save of the year.

The offense notched nine hits and left just five men on base. Redshirt junior right-hander Bryce Nightengale started the game for George Mason and was removed in the sixth inning in the midst of a four run Hoya rally. Bernstein went yard for the second game in a row, blasting a solo homer to right field in the seventh. Bernstein and sophomore center fielder Ryan M. Davis each added two hits in the win. Junior third baseman Ryan Weisenberg also knocked a two-run single in the sixth. Killam moved to 4-1 on the season and Nightengale dropped to 3-3.

In the finale, the Georgetown arms faltered a bit, but the bats remained red-hot and led the Hoyas to a 10-7 victory, clinching the series sweep and a six game win streak, their longest of the year. Freshman right-hander Owen Lamon started the game and was pulled before he could record an out in the second. The freshman gave up two runs in the first and three in the second. Luckily for Georgetown, sophomore right-hander Jeremiah Burke saved the game with a valiant relief effort, pitching 4.1 scoreless innings. Morreale, senior right-hander Kevin Superko, and Swad pitched the remainder of the game, giving up two runs over the final 3.2 innings.

Down 5-0 entering the fifth, the Hoyas mounted a huge comeback to take the game. Bernauer blasted a grand slam following an RBI single by freshman shortstop Eddie McCabe. The Hoyas also added four runs in the ninth, including RBI singles from both McCabe and Bernauer. Bernauer picked up three base hits and five RBIs on the day. Superko was credited with the win, his first of the year.

Next, Georgetown will take on UMBC (10-18, 4-5 America East) on Tuesday in Baltimore. First pitch is scheduled for 6:00 p.m. ET at UMBC’s Alumni Field. Follow @GUVoiceSports on Twitter for updates and breaking news.